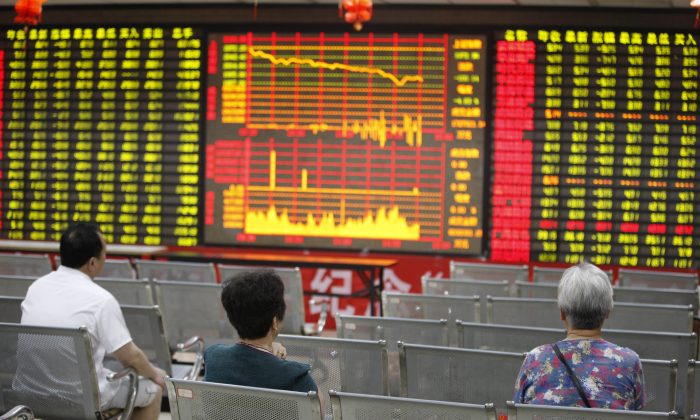 Investors watch the electronic board at a stock exchange hall on June 24, 2013 in Huaibei City, Anhui Province, China. The Shanghai Composite Index dropped 5.3 percent on Monday, triggering concern over the health of the Chinese economy. (ChinaFotoPress/Getty Images)
China

The Shanghai stock market fell 5.3 percent on Monday, its biggest drop in four years, triggering concern over the health of the Chinese economy.

The drop caused global stock markets to also suffer: the Dow Jones Industrial was down 1.3 percent, while the Standard and Poor 500 fell 1.7 percent.

Pointing to the Shibor (Shanghai Interbank Offering Rate) shooting up to 13 percent, Dr. Frank Tian Xie, a business professor at the University of South Carolina Aiken, believes that the liquidity crisis in China is the likely cause for the sharp decrease in the Shanghai stock market on Monday. The Shibor is the interest rate at which Chinese banks lend funds to one another.

Though the liquidity crisis has often been attributed to the central government’s reluctance to inject money into cash-strapped banks, for fear of their reckless lending to infrastructure projects, Xie says the money supply could actually be drying up at the national level.

In order to counteract the stress in the interbank market, the regime may simply print more money, which will serve as collateral for all lending. “Another round of inflation and the possibility of China issuing new, higher-denomination banknotes is on the horizon,” Xie told Epoch Times.

Other analysts have said that the “money shortage” will last until mid-July. An estimated 1.5 trillion yuan ($244 billion) of wealth management products will mature by the end of June, but the actions taken so far by Chinese authorities’ have led to concern that a liquidity crisis is impending.

U.S. Federal Reserve chairman Ben Bernanke stated last week that the U.S. federal government plans to pull back quantitative easing later this year, eventually ending the economic recovery plan altogether by mid 2014. Economists have speculated that this could have negative consequences for stock markets globally, and could also impact equities in the Asia-Pacific region.

Research and reporting by Ariel Tian. Translation by Ming Ming.