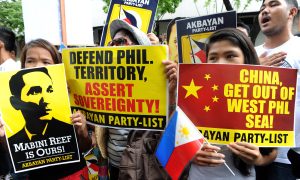 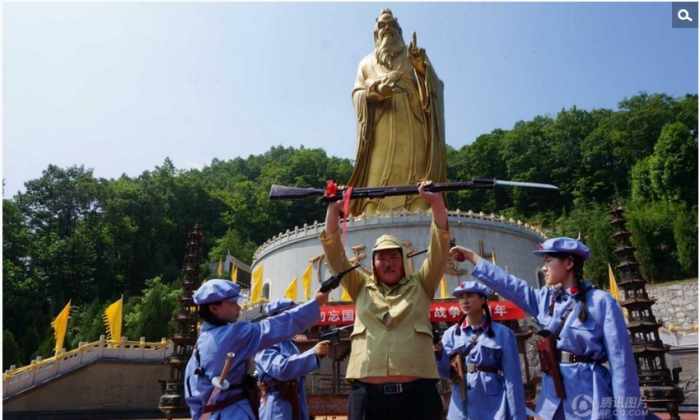 Four young women in Chinese Red Army outfits re-enact the capture of a Japanese soldier at a tourist spot in Luoyang City of Henan Province, on July 7. The activity was held to memorialize the 77th anniversary of Japan's invasion of China on July 7, 1937. (Screenshot/news.qq.com)
China

China Stirs Up Bitter Thoughts on Japan Before Anniversary of War

A group of young Chinese women dressed in Red Army outfits, machetes tucked into their belts, surrounded a Japanese soldier in a public park recently, pointing large plastic guns to his head as he held up his bayonet in surrender, an old-style gas mask covering his face. In another photograph he was forced to kneel, shirtless, facing a statue of Confucius—the words “I apologize for rape, murder, and arson” written in black ink on his back.

Another of the photographs showed a propaganda banner hanging from the Confucius statue. It read: “Do not forget national humiliation.”

The Chinese Communist Party has no intention of allowing China to forget.

Those scenes took place at a tourist spot in the city of Luoyang, Henan Province, recently. The occasion was none other than the memorialization of Japan’s invasion of China 77 years ago. On July 7, 1937, Japanese military instigated a crisis—now called the Marco Polo Bridge Incident—that gave them an excuse to go to war. The date is widely used as the start of the Japanese invasion and subsequent war, which lasted until 1945.

As with previous anti-Japanese propaganda, protest, and public rhetoric, the Chinese authorities are milking this anniversary to remind the public of Japan’s atrocities in the 1930s and 1940s, when it invaded and occupied large parts of China. The bitter memorialization comes at a time of heated relations between the two countries—to the extent that some analysts have started openly speculating about the possibility of open conflict, or even war, which may drag in the United States.

This year, even Party Chairman Xi Jinping decided to make his views known. At a public rally of over 1,000 officials and social representatives held at the Museum of the War of Chinese People’s Resistance Against Japanese Aggression, in Beijing, Xi said, “There are still a minority of people who ignore the historical facts, ignore tens of millions of innocent lives.”

He added, “They are going against the trend of the history, denying and even beautifying [Japan’s] history of aggression, undermining international trust, and creating regional tensions.”

These were likely references to Japan’s Prime Minister Shinzo Abe, who has repeatedly visited a temple, which enshrines Japan’s war dead—including war criminals. Chinese officials said that Japan has not sufficiently atoned for or reflected upon its historical crimes.

The Beijing Youth Daily reported that this was the first time the top Party leader has marked the July 7 date; previous leaders have visited the museum at the 50th or 60th anniversaries of the conclusion of the war. This year is the 77th anniversary of the war’s commencement, leading some to gain the impression that marking it in such a public fashion has been partly opportunistic.

“Anyone who wants to deny, distort, or even beautify the history of aggression, Chinese people and people in all nations would absolutely disagree!” Xi said at the rally.

Chinese authorities also created a National Memorial website on July 6, describing in depth the brutality of Japanese violence, including displays of victims of chemical warfare, germ warfare, sex slavery, and more. Visitors to the website are invited to virtually light candles, plant trees, send flowers, or ring bells to memorialize the victims of the Japanese military.

Over 600,000 visitors left notes on the website within two days, after it was heavily promoted in the mouthpiece media People’s Daily and China Central Television. Nearly 1.5 million people visited the site.

The whipping up of anti-Japanese sentiment in China comes as tensions between the two countries are at a high point. Japanese reconnaissance craft and Chinese fighter jets in late May flew very close to one another, in an air identification zone set up by China in the East China Sea, and neither country has given any ground over disputes surrounding the Senkaku Islands, known as the Diaoyu in Chinese, which have been controlled by Japan since the late 19th century.

In response to what it sees as China’s aggression, Japan has recently offered a reinterpretation of its constitution that would allow its military to do more than merely defend.