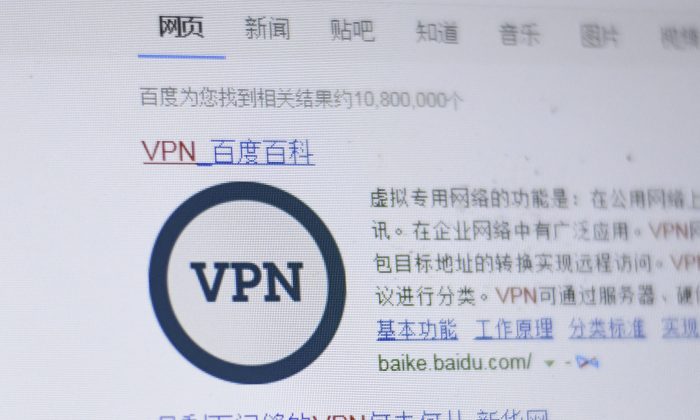 A laptop screen shows the word "VPN" written in the search field of the Chinese Baidu website in Beijing on March 30, 2018. Chinese authorities had announced that all unrecognized VPN services would be blocked by March 31, meaning that Chinese and foreign companies must choose from a limited number of state-approved VPNs. (Fred Dufour/AFP/Getty Images)
China Society

HONG KONG—Chinese authorities have stepped up efforts to block virtual private networks (VPN), service providers said on Oct. 30 in describing a “cat and mouse” game with censors ahead of a major trade expo and internet conference.

VPNs allow internet users in China, including foreign companies, to access overseas sites that authorities bar through the so-called Great Firewall, such as Facebook Inc and Alphabet Inc’s Google.

In March, a new regulation went into effect mandating that all VPNs sold within China must be government-sanctioned. However, the original announcement was quickly deleted from the official website after many complained about the regulation.

Under Chinese leader Xi Jinping, authorities have sought to curb VPN use, with providers suffering periodic lags in connectivity because of government blocks.

“This time, the Chinese government seemed to have staff on the ground monitoring our response in real time and deploying additional blocks,” said Sunday Yokubaitis, the chief executive of Golden Frog, the maker of the VyprVPN service.

Authorities started blocking some of its services on Sunday, he told Reuters, although VyprVPN’s service has since been restored in China.

“Our counter measures usually work for a couple of days before the attack profile changes and they block us again,” Yokubaitis said.

The latest attacks were more aggressive than the “steadily increasing blocks” the firm had experienced in the second half of the year, he added.

The Cyberspace Administration of China did not respond immediately to a faxed request from Reuters to seek comment.

Another provider, ExpressVPN, also acknowledged connectivity issues on its services in China on Monday that sparked user complaints.

“There has long been a cat-and-mouse game with VPNs in China and censors regularly change their blocking techniques,” its spokesman told Reuters.

Although fears of a blanket block on services have not materialized, industry experts say VPN connections often face outages around the time of major events in China.

Xi will attend a huge trade fair in Shanghai next week, while the eastern town of Wuzhen hosts the annual World Internet Conference.

Censors may be testing new technology that blocks VPNs more effectively, said Lokman Tsui, who studies freedom of expression and digital rights at the Chinese University of Hong Kong.

“It could be just a wave of experiments,” he said of the latest service disruptions.

The Chinese regime has intensified its control over the internet, as Communist Party leaders look to tighten their grip on a huge and diverse online cultural scene popular with China’s youth. Everything from video parodies to viral memes and dissident speech has come under China’s censorship.

According to international observers, the Chinese regime has been remarkably successful at allowing its citizens to feel that they are free to use social media to enrich their lives, while simultaneously creating a censorship system that ensures they ultimately remain under the regime’s tight grip.

Chinese internet companies employ tens of thousands of people to patrol content on the Chinese internet. Some users who have dared to express dissenting views have even been jailed.

The Chinese regime claims its censorship is a way to fight “online rumors,” similar to social media’s attempts to censor “fake news” in the West. In reality, the censorship essentially ensures that no online presence grows enough to pose a threat to the Communist Party’s rule and the prevailing propaganda that it has sought to impose forcibly.