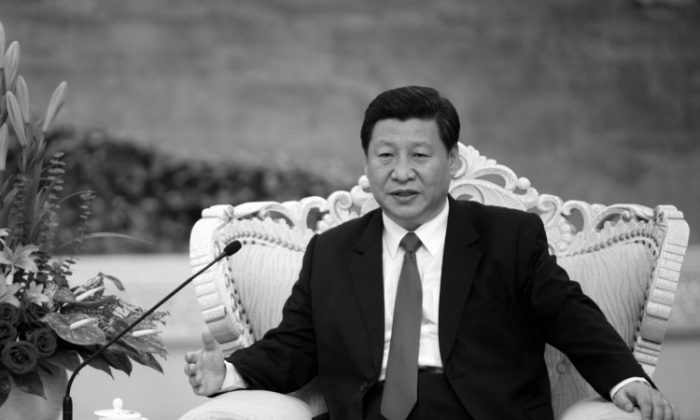 Xi Jinping in the Great Hall of the People in Beijing on Aug. 29, 2012. Xi’s views have become a matter of great interest. (How Hwee Young/AFP/Getty Images)
China

In advance of Xi Jinping being named head of the Chinese Communist Party at the 18th Party Congress in November, Xi’s views have become a matter of great interest. Some Chinese journalists and analysts can now be seen aligning with the reformist bent Xi is believed to hold, some are seen advising Xi about what he should do, and some are suspected of speaking for Xi, revealing his plans for the future.

Nicknamed “the second CCTV,” Phoenix TV has served as a propaganda outlet in Hong Kong for the Chinese Communist Party (CCP), according to Ma Xiaoming, a former news reporter for Shanxi Province TV.

Redressing Cases in the Cultural Revolution

On a Sept. 17 program hosted by He Liangliang, the deputy chief editor of Phoenix TV, He Liangling passionately praised two Chinese writers who actively participated in the 1989 democracy movement and were forced to escape into exile overseas afterward.

“We firmly believe that the tribulations of those who stood up for justice was the result of cunning and evil people getting the upper hand temporarily,” He said.

After Ye learned this from Xi, Phoenix TV started re-evaluating the Cultural Revolution and criticizing it, the source said.

Disgraced Politburo member Bo Xilai has been stripped of his Party membership and will soon stand trial in a criminal court.

The source said that prosecuting Bo Xilai is a way of “eradicating residual poisons of the Cultural Revolution, which sets the tone of political reform for the 18th Party Congress.”

Jason Ma, a commentator for New Tang Dynasty TV, said last week, “If Xi is a wise man, he should cut ties with the persecution of Falun Gong. There is hard evidence for forced, live organ harvesting from Falun Gong practitioners in China—the evidence has been presented at a U.S. congressional hearing and at a U.N. Human Rights Commission meeting.”

“If Xi is a wise man, he should take a stance and take action because after all, he is not responsible for this,” Ma said. “But he will be responsible for what happened if he covers it up.”

Deng Yuwen, vice editor of Study Times, published a three-part article titled “The Political Legacy of Hu and Wen” in the financial magazine Caijing on Sept. 2.

Deng also suggested a timeline for Xi’s political reform, saying that Xi will need to go through a transition period to settle and balance all sorts of relationships and ties with different factions/groups.

But if Xi waits for five years until his second term to start political reform, it would be too late; “because of the severe social conflicts in China, the people anticipate a reform anxiously and won’t necessarily have the patience to wait for five years,” Deng said.

Study Times is affiliated with the Party School of the Central Committee of the CCP, which is headed by Xi Jinping. Many analysts therefore think Xi might be using Deng’s articles to present his own views.

Xi rose to the top seat of the CCP because he is a perfect candidate to balance interest groups, and Deng’s article actually implied that Xi’s political reform will follow Burma’s (also known as Myanmar) model, columnist and political commentator Chen Pokong said in an article published in Hong Kong’s Open magazine in October.

When meeting with Burmese President U Thein Sein in China on Sept. 21, Xi said, “China is willing to carry out an exchange of experiences with Burma on governing the country.”

According to Chen Pokong, after Thein Sein became the president of Burma, he quietly started implementing a series of reform measures, without affecting those who have vested interests, including senior general and former dictator Than Shwe. Therefore, the reform had Than Shwe’s tacit support and a kind response from the opposition leader Aung San Suu Kyi.