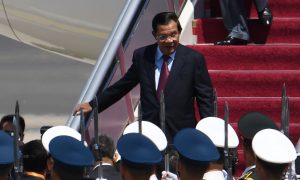 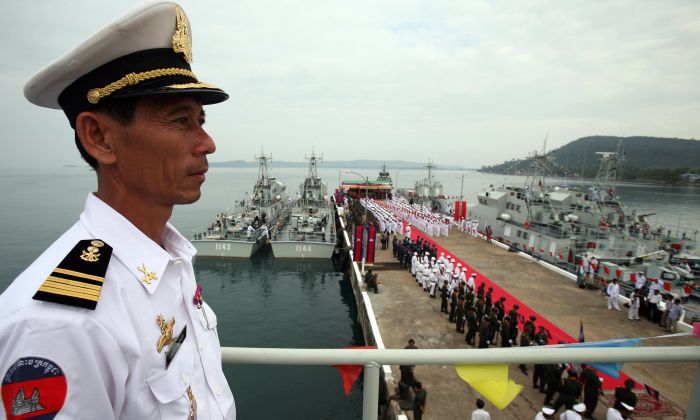 A Cambodian naval personnel stands on a naval patrol boat during a ceremony for nine naval patrol boats that were donated by China, at the Cambodia Naval Base in Sihanoukville, some 220 kilometers south-west of Phnom Penh, on 07 November 2007. (TANG CHHIN SOTHY/AFP/Getty Images)
Chinese Regime

China Signed Pact with Cambodia to Use Naval Base for Its Military: Media Report

After the Wall Street Journal, citing anonymous official sources, revealed that the Chinese regime had signed a secret agreement with Cambodia to use its naval base, Phnom Penh responded with an outright denial.

The Journal first reported on July 21 that China and Cambodia signed a secret pact this past spring, in which Phnom Penh would allow Chinese armed forces to use a naval base at Ream, which strategically faces the Gulf of Thailand.

The Journal cited anonymous U.S. and allied officials who had seen drafts of the pact. The publication also claimed that worries over the proposed deal prompted U.S. Vice President Mike Pence to draft a letter of concern to the Cambodian Prime Minister.

The news is the latest sign of China’s aggression in defending its territorial claims in the South China Sea, a region with rich oil reserves. A number of nearby Southeast Asian nations also claim areas of the South China Sea as their own.

In Cambodia and the Southeast Asian region generally, China has also sought to economically coerce countries into abiding by its interests, challenging historic partnerships that the United States has built, according to a strategy paper by the Washington-based think tank Atlantic Council published in 2017.

In response to the Journal report, Cambodian Prime Minister Hun Sen told local pro-government news site Fresh News on July 22: “This is the worst-ever made up news against Cambodia… No such thing could happen because hosting foreign military bases is against the Cambodian constitution.”

Meanwhile, Geng Shuang, spokesman of China’s Foreign Ministry, said at a press conference on July 22: “As we know, the Cambodia side has denied this. China and Cambodia are traditionally friendly neighbors, and we have cooperated in various areas.”

When asked by reporters whether the Chinese side also denies the news, Geng did not directly respond, only noting: “I hope the relevant parties do not over-interpret the normal cooperation between China and Cambodia.”

Emily Zeeberg, a spokesperson for the U.S. Embassy in Phnom Penh, told the Journal that Washington “is concerned that any steps by the Cambodian government to invite a foreign military presence in Cambodia” would disturb regional peace and stability.

According to the Journal, the agreement stipulated that China would install armed forces at the Ream Naval Base for 30 years, after which the agreement would automatically renew every 10 years.

The Ream Naval Base covers about 190 acres (0.29 square miles, 0.77 square kilometers) of land and has a single pier docked with a dozen patrol crafts. This base currently has two facilities built with U.S. funding, that are being used by the Cambodian navy, according to the Journal.

The pact allowed China to build two new piers at the base, one for Chinese use, one for Cambodian.

The Journal quoted U.S. officials saying they first heard about negotiations for this agreement about one year ago.

Earlier this year, Cambodia’s defense ministry first requested U.S. funding to renovate the U.S. facilities at Ream, then refused the money in July—prompting suspicion from U.S. officials, according to the report.

Satellite images show that an area of the Ream Naval Base has been cleared out recently, “in apparent preparation for construction work,” the Journal reported.

The Ream Naval Base is about 40 miles from Dara Sakor International Airport, currently being built by the Chinese company Union Group. The firm has leased the surrounding land—spanning 89,000 acres and 20 percent of Cambodia’s coastline—for 99 years beginning in 2008.

According to the Japan Times’ report on July 20, the airport project has since been billed by the Chinese regime as part of a greater redevelopment project under One Belt, One Road (OBOR), with $3.8 billion in Chinese funding. OBOR is Beijing’s signature foreign policy initiative aimed at growing geopolitical influence through investments in infrastructure projects throughout Southeast Asia, Europe, Africa, and Latin America.

The Union Group project will also include a deep-water seaport, an industrial park, and a luxury resort complete with power stations, water treatment plants, and medical facilities.

Recent satellite images showed that the airport has a 2-mile-long runway. The Journal suggested that it could have military purposes, as it is long enough for Boeing 747s, Airbus A380s, as well as China’s long-range bombers and other military vehicles to take off and land.

The Ream naval base and Union Group project are both close to the city of Sihanoukville, where Beijing has developed the Sihanoukville Special Economic Zone (SSEZ), a key OBOR project.