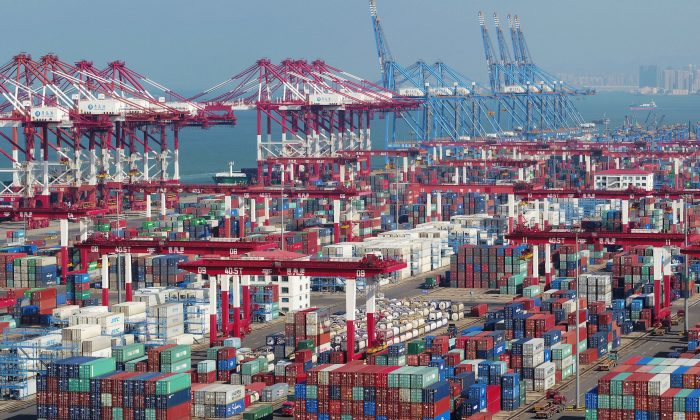 Containers and trucks are seen at a terminal of the Qingdao port in Shandong Province, China on Nov. 8, 2018. (Reuters)
China Business & Economy

BEIJING— China on Jan. 15 signaled more stimulus measures in the near term as a tariff war with the United States took a heavy toll on its trade sector and raised the risk of a sharper economic slowdown.

The world’s second-largest economy will aim to achieve “a good start” in the first quarter, the National Development and Reform Commission (NDRC) said in a statement, indicating the government is ready to counter rising pressure. Central bank and finance ministry officials gave similar assurances.

Surprising contractions in China’s December trade and factory activity have stirred speculation over whether Beijing needs to switch to more forceful stimulus measures, though most analysts believe the government is wary of steps that could heighten debt risks and weaken the yuan.

“Further economic stimulus measures will be needed. The authorities seem to be taking their time to deliver this, perhaps chastened by the overkill of their stimulus in the financial crisis,” ING economists said in a note to client.

“The eventual package may be very substantial.”

Some analysts believe China could deliver 2 trillion yuan ($296.21 billion) worth of cuts in taxes and fees, and allow local governments to issue another 2 trillion yuan in special bonds largely used to fund key projects.

Most, however, expect the fresh stimulus will take months to start feeding through the world’s second-largest economy, with a turnaround not expected till spring or summer.

China’s growth slowed in 2018 as a years-long campaign to reduce a mountain of debt and crackdown on riskier lending practices pushed up borrowing costs, dampening investment and hurting domestic demand.

As the trade war with the United States escalated last year and hit exports, global financial markets went into a tailspin on worries about a sharper China slowdown, though many analysts believe an economic hard landing is unlikely.

Sources told Reuters last week that Beijing was planning to lower its growth target to 6-6.5 percent this year after an expected 6.6 percent in 2018, the slowest pace in 28 years.

The proposed target, to be unveiled at the annual parliamentary session in March, was endorsed by top leaders at the annual closed-door Central Economic Work Conference in mid-December, the sources told Reuters.

Annual growth of about 6.2 percent is needed this year and in 2020 to meet the ruling Communist Party’s longstanding goal of doubling gross domestic product and incomes in the decade to 2020, and to turn China into a “modestly prosperous” nation.

China has lowered the level of reserves that commercial banks need to set aside for the fifth time in a year to spur lending, particularly to small and medium-sized firms. Beijing has also cut taxes and fees, and stepped up infrastructure investment to shore up the economy.

This year, China will step up fiscal expenditure and implement larger tax and fee cuts. The cuts will focus on reducing burdens for small firms and manufacturers, the finance ministry said in a statement on Tuesday.

But government efforts to channel more funds to the struggling private sector are facing big hurdles: banks are wary of more bad debts amid the long regulatory crackdown; and, many business are in no mood to make new investments in the face of faltering sales.

Stabilizing employment is the government’s top priority, NDRC Vice Chairman Lian Weiliang said at a news conference on Tuesday, briefing reporters on the measures that are in the works following December’s economic work conference.

No Flood of Stimulus

China will speed up investment projects and local government bond issuance, but will not resort to “flood-like” stimulus, Lian said.

The central bank, in a separate statement issued at the press conference, said it will maintain prudent monetary policy with “appropriate tightness and looseness.”

Monetary policy will be made more forward-looking, flexible and targeted, the People’s Bank of China (PBOC) said.

But a prudent monetary policy does not mean that there will be no changes, Deputy Governor Zhu Hexin said.

Apart for cutting the reserve requirement ratios (RRRs) for commercial banks, the central bank has also increasingly turned to open market operations, in particular the medium-term lending facility, or MLF, to maintain a generous pool of funding.

Cutting benchmark interest rates may be the last resort as that could weigh on the yuan and fuel debt risks, analysts say.

When asked if the PBOC should cut benchmark rates, Zhu said existing monetary policy measures should be improved.

“Regarding the question of interest rate cuts, people are paying more attention to it. Our current monetary policy, including overall policy—RRR cuts and medium-term lending facility—helps us adapt to the overall economic environment and price levels,” Zhu said.

“Overall, monetary policy is gradually taking effect in the economy. We should look to improve our existing policies and make dynamic assessments on that basis,” he said.

But growth of outstanding total social financing (TSF) slowed to an all-time low, as the squeeze on shadow banking slowly shuts off a major source of funding for smaller companies.

Despite concerns that continued policy easing will pressure the yuan currency, central bank officials said they were confident the exchange rate could be kept stable.

“Our exchange rate regime is a floating one based on market supply and demand. We have confidence on this aspect (considering) our economy and our foreign exchange reserves,” Deputy Governor Zhu said.