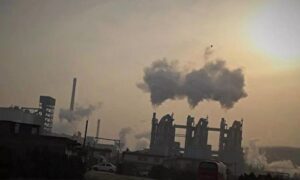 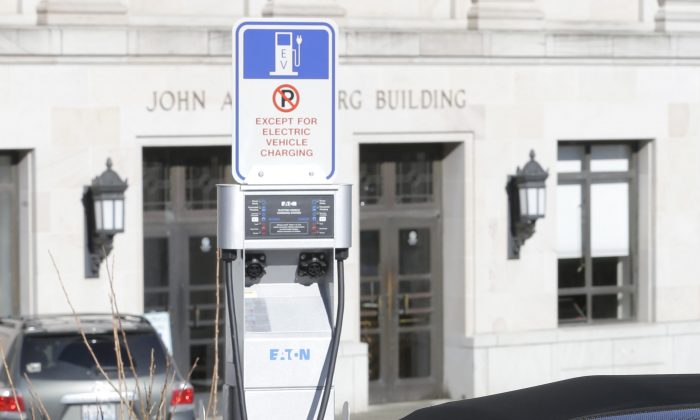 A Tesla electric car is plugged in while parked at a parking spot reserved for charging electric vehicles at the Capitol in Olympia, Wash., on Feb. 17, 2015. (Ted S. Warren/AP Photo)
Viewpoints

China Shows the US Its Next Environmental Challenge

President Joe Biden and the green agenda in the United States have placed a big bet on electric vehicles (EV). The administration’s infrastructure plan has scheduled the construction of 500,000 new charging stations.

The federal government and several states have long offered subsidies of up to $7,500 to those who purchase EVs. Recently, all of the automakers in the country—domestic and foreign-based—have endorsed Biden’s plan to raise EV sales to half of all new cars and light trucks by 2030.

The president has characterized electronic vehicles as “a vision of the future that is now beginning to happen.” In a recent article, Fred Krupp, president of the Environmental Defense Fund, characterized the turn to EVs as “the automotive development of our lifetime.” In none of this boosting—from Biden, from Krupp, from the auto manufacturers, from any environmental groups, or from the Environmental Protection Agency (EPA)—did anyone even hint at any problem.

EVs certainly have their appeal. They’ll help reduce the emissions of greenhouse gases. According to the EPA, tailpipe exhaust from cars and light trucks accounts for one-quarter of all such gases emitted in the United States.

EVs have other virtues that are worthy in their own right. They run cooler and quieter than vehicles powered by internal combustion engines. But still, nothing in life comes without cost. Biden’s goal will require a 25 percent addition to the nation’s electric generation. That’ll require funding.

There also are questions of what power source will generate the additional electricity. Hydro and nuclear are unlikely and, without major technological advances, so are wind and solar power. If the power generators use natural gas, they’ll have chosen the fossil fuel with the fewest emissions, but that use will still detract from the total emissions control won with EVs.

Apart from these considerations, it’s also becoming clear that electronic vehicles threaten pollution, not greenhouse gases to be sure, but a major environmental concern, nonetheless. Though neither Biden nor any of the other EV enthusiasts mention it, this threat is already apparent in China, an early EV adopter and the leading user of such vehicles in the world.

It seems that the batteries used in electric cars and trucks are toxic. Once they’re exhausted, their disposal carries a significant environmental challenge. If the United States plans to go this route, and it’s a worthy one, all of those involved owe it to the citizens of this country to have a parallel plan to deal with this environmental matter.

The United States has a long way to go to meet the 2030 goal that Biden just announced. The country now has about 2 million EVs on its roads. Sales of those cars and light trucks constitute only about 3 percent of total sales, a long way from the 50 percent target. All of the automakers that have enthusiastically endorsed the plan have also made it clear that success will hinge on federal funding for manufacturing and supply-chain research and development, purchase initiatives, and an EV charging network. That will impose a significant cost.

Also, after hearing the representatives of those firms, one might forgive a cynic for seeing a broader range of motivations among the auto executives than a straightforward concern for the planet.

China can indeed offer guidance. Because that country’s commitment to EVs came earlier than most, it’s first in learning of some of the associated problems, including battery disposal. The issue has only just emerged because EV batteries last five to eight years. For a long while, there was little to dispose of. But now that many of these batteries are reaching the end of their useful life, China must find something to do with the disused equipment.

Nor is it a small matter. In the past 12 months, China has faced the need to get rid of about 200,000 tons of such batteries. The government expects that number to grow to 800,000 tons over the next four years, an annual growth rate of more than 40 percent.

It’s a delicate environmental matter. EV batteries contain heavy metals, such as cobalt and nickel, neither of which break down in nature. They also contain manganese that can pollute soil, water, and air. Only 500 micrograms of magnesium in a cubic meter of air will produce manganese poisoning in most people. As lithium batteries degrade, they produce hydrogen fluoride and other pollutants.

China has already had to deal with a bout of manganese poisoning tied to battery disposal in Guangdong Province. To give a sense of levels of toxicity, one scientist involved in the Guangdong incident, professor Wu Feng of the Beijing Institute of Technology, explained that one “20-gram cell phone battery can pollute three standard swimming pools of water, and if abandoned on land, it can pollute one square kilometer of land for 50 years.”

In part, China’s problems stem from incomplete policing (not an especially common event in the country). Even the Chinese Communist Party, ever loath to admit any failing on any front, has admitted that, over the years, about half the batteries have been disposed of improperly. Partly in response to this recognition, but also with a broader understanding of the scope of the potential problem, the Party has committed to stricter supervision. But if this policing problem can explain the Guangdong problem, it says little about the potential pollution problem everywhere as numbers of EVs grow and their batteries age.

There’s no suggestion here that the United States or any other country give up on electric vehicles. They’ll help with greenhouse gas emissions and, as indicated earlier, have other virtues as well. No doubt future technologies will rid EV batteries of their toxicity and find better ways to dispose of them.

But even with all the benefits—present and future—this potential pollution problem should remind both this country’s public and its officials that EVs aren’t the unmitigated good some pretend they are and that greenhouse gases, no matter how much they sit in the fronts of people’s minds these days, are far from the only environmental concern. China’s present is a clear warning of tomorrow’s potential troubles for the United States.