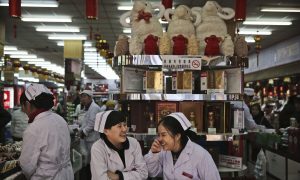 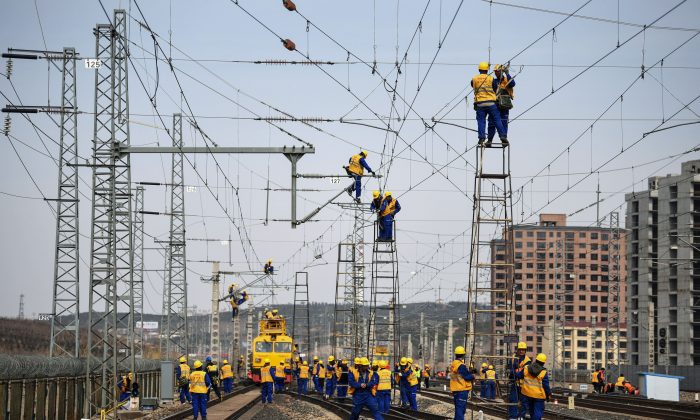 Workers at the construction site of the Tangshan-Hohhot railway in Ulanqab, in north China’s Inner Mongolia region, on March 19, 2019. Job growth bounced back in the first quarter as a broad-based, credit-driven rally took shape. (STR/AFP/Getty Images)
China Business & Economy

China has gone back to its old bad habits of propping up the economy after a bruising end to 2018, but it can’t last, says China Beige Book (CBB). Comparing China in the long run to Japan is apt considering the proliferation of a zombie economy, says Shehzad Qazi, managing director of China Beige Book International.

CBB, a research service that speaks to thousands of companies and bankers on the ground in China, reports in its early look at the first quarter that the rebound in China is primarily a credit-driven story—lending to anyone and everyone has reached a level not seen since 2013. The reduced chance of harsher tariffs as Sino-U.S. trade talks move closer to resolution also helped.

The Shanghai Composite has surged after a disastrous 2018. It’s up 21 percent in 2019, while the yuan has moved away from that 7-handle—up 2.5 percent year-to-date.

But CBB has compelling reasons to doubt the rally’s staying power as the communist regime departs from its push for reducing dependence on credit. For the first time in a year, credit costs at banks picked up in the first quarter. In fact, average borrowing costs have spiked—to the highest since mid-2017 and dramatically higher than at any other time in the last seven years.

Credit costs at banks average 6.90 percent, and in the bond market 9.91 percent.

Either interest costs have to fall or borrowing will, says CBB.

And worse still, the use of shadow banking rose and experienced the biggest increase in credit costs, reaching a 4-year high of 11.42 percent, according to CBB data.

The recipe for disaster comes from slowing demand and a high debt load. Deflationary pressure still plagues manufacturing and commodities. This is a worrisome development in the longer term.

“With deleveraging dead and sectoral rebalancing going nowhere, Beijing is simply focused on the short term, avoiding a politically worrisome slowdown,” he added.

Chinese Premier Li Keqiang insists that China’s GDP growth will not fall below 6 percent. To this end, China can reduce banks’ reserve requirements and interest rates.

And this has been propping up the house of cards for an extended period. But it can’t go on ad infinitum and has consequences for return on capital. It will lead to a harsher slowdown in the future. Thus it had been Beijing’s plan to clean up its act and go on a deleveraging campaign.

But then the trade tensions with the United States hit and the Chinese economy struggled in the second half of 2018.

The ‘Japanification’ of China

Japan’s economy has been stuck in quicksand for decades with rock-bottom interest rates, minimal growth, and a debt-to-GDP ratio that is easily the highest in the G7.

“China is still in the early stages of this dynamic, but it is definitely in it,” Qazi said.

Many doubt that China is growing at the roughly 6 percent rate the communist regime says it is. Inflation is muted and the rally in property was heavily driven by SOEs.

“2018 also started fairly well but ended with little acceptance of Beijing’s ceaseless claims of stable growth,” according to CBB’s report.

As China opens the credit spigots, companies that should be bankrupt roll over their debt and “live” on, and the drain on future growth will become increasingly burdensome, says Qazi.