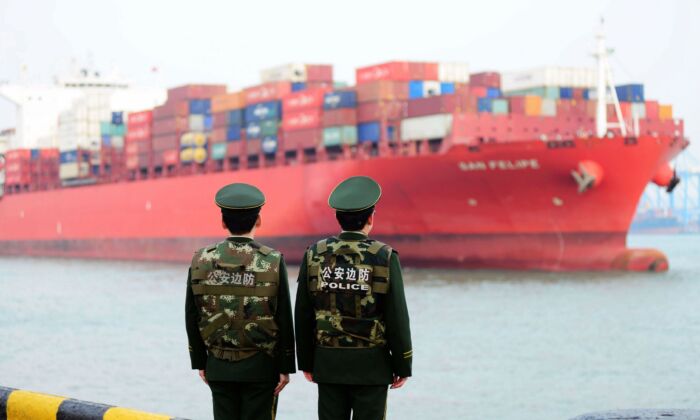 China should further integrate with the global market so that it could cause pain to any country that chooses to sanction the communist regime, a Chinese scholar argued during a recent interview with state-run media, saying that this was a lesson that Beijing should draw after seeing the effect of Western sanctions on Russia’s economy amid the Ukraine war.

The country “must stride toward greater opening-up” in global trade and investment to deter sanctions, as the West would dare not punish Beijing fearing that they would also suffer economic damage from such a move, said Zheng Yongnian, a director on global and contemporary China studies at the Chinese University of Hong Kong, Shenzhen.

“China’s economy, deeply embedded in the West, will already make the West feel real pain,” Zheng told China’s hawkish state-run newspaper The Global Times on March 18. “In this way, such sanctions will be difficult to sustain.”

He said domestic enterprises must keep expanding globally at any cost, calling it “a huge lesson” for China from the Russia-Ukraine war.

Russia is currently feeling the economic pain caused by unprecedented Western sanctions over its invasion of Ukraine. Economists expect the sanctions will push the country into a deep depression, which it may not recover from for years.

Yet sanctions have not deterred Russian President Vladimir Putin’s military aims. He has put his country’s nuclear forces on high alert several days after launching the war. Its foreign minister warned earlier this month of a “nuclear and destructive” third world war amid the ongoing conflict.

Zheng claimed that China will not even need to threaten use of such weapons to defend itself in the event of a future conflict, because the country would be able to win the battle on the economic warfare front.

But an observer said China would be “more vulnerable” and has more to lose under the same circumstances, given that Russia is more self-sufficient in food and energy while China is heavily dependent on imports for a range of commodities including soybeans, crude oil, and natural gas.

“Without international trade, China’s economy would be set back by more than 50 percent,” an unnamed market watcher recently told Taiwanese state news agency CNA, saying the achievements of China’s reform and opening up over the past 40 years will disappear in an instant.

On global equity markets, China has also appeared to be the major casualty of the Ukraine war, as mainland Chinese and Hong Kong stocks suffered several deep sell-offs since the invasion.

The communist regime seeks to reshape the global order into its own image, Western officials and experts have warned, so that political, military, and economic affairs can be conducted on Beijing’s terms across the world.

“The Chinese Communist Party insists on making the Chinese people and the people of all countries to have the same destiny,” Chinese leader Xi Jinping said last July in a speech to political party leaders from over 100 developing countries.

Over the past years, Chinese policymakers have also used economic coercion to intimidate countries that have criticized Beijing. Since mid-2020, for example, Beijing has targeted Australia after it called for an independent investigation into the origins of COVID-19 by restricting imports such as beef, coal, and grapes, and imposing tariffs on the country’s barley and wine.