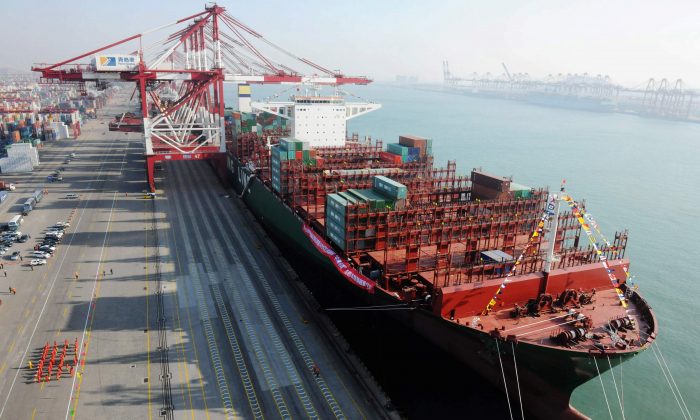 Beijing is working on a merger of gigantic proportions.

While the two shipping giants have been hashing out a deal for months, a merger is still no guarantee. Social, political, and economic pitfalls inherent in an economy dominated by SOEs are hampering efforts to modernize and optimize the sector.

COSCO and China Shipping have been structuring a deal for months, around the combination of the two firms’ container-shipping, tanker, dry-bulk, and port operations businesses.

The two have 330 container vessels combined, managing around 8 percent of all global shipping. Together, the firms trail only global shipping giants Moller-Maersk of Denmark, Mediterranean Shipping Co. of Switzerland, and CMA of France.

According to a report by investment bank Jeffries, COSCO and China Shipping together operate about 73 percent of China-flagged tonnage. That’s a de facto monopoly, and allows the combined company to demand higher pricing from customers seeking to ship goods from China.

Container-shipping rates have plummeted in recent years on excess capacity and lackluster demand, with many shipping routes becoming unprofitable.

The Shanghai Containerized Freight Index, a weighted index that tracks global freight shipping rates from China, sat at $484 per twenty-foot container equivalent unit (TEU) on Nov. 20. That was is the lowest rate of 2015 and less than half of the $1,000 per TEU quoted as of the end of 2014. TEU is a globally used metric to quote freight shipping costs.

The average price per TEU from China to Europe is $409, around half of the benchmark rate of $800 per TEU, which is considered the break-even point at today’s already low fuel prices, according to a report by Drewry.

Mergers among global shipping giants have been rare, but the COSCO-China Shipping merger may kick off a wave of consolidation in the fragmented industry. Singapore’s Neptune Orient Lines Ltd. is also in discussions to sell itself, with France’s CMA as a leading bidder.

“I think we are standing in front of a new wave of consolidation for the first time in 10 years because the market is very weak,” Maersk Line chief executive Soren Skou told The Wall Street Journal in an interview.

China announced earlier this year that it would consolidate the country’s bloated and underperforming SOE sector—where most companies are not profitable.

Newly consolidated companies would then be organized as holding companies instead of government agencies, with their primary focus on maximizing profitability and getting more private funding such as through IPOs.

Similar mergers in other industries are planned. Beijing is looking to combine the cargo operations of Air China, China Southern Airlines, and China Eastern Airlines. The discussions are ongoing, and could eventually include consolidating the passenger services of several China state-owned airlines.

Beijing’s goal is twofold. One, to increase profit share to the Communist Party from 15 percent to 30 percent by 2020 partially to fund a rapidly aging population—most of whom used to work at SOEs. And two, to better compete with international rivals, increase innovation and accountability, in an effort to revive a stumbling economy.

But consolidating SOEs is easier said than done.

Discussions between COSCO and China Shipping have dragged on largely due to challenges in combining overlapping shipping operations without cutting jobs, which would make winning over Beijing regulators—who are concerned about social stability and the Communist Party’s reputation—difficult.

The two shipping firms have high minority ownership compared to Chinese SOEs in other industries. But to these minority owners, not cutting jobs given current economic and shipping industry realities may be a nonstarter.