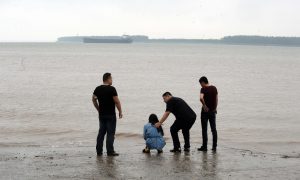 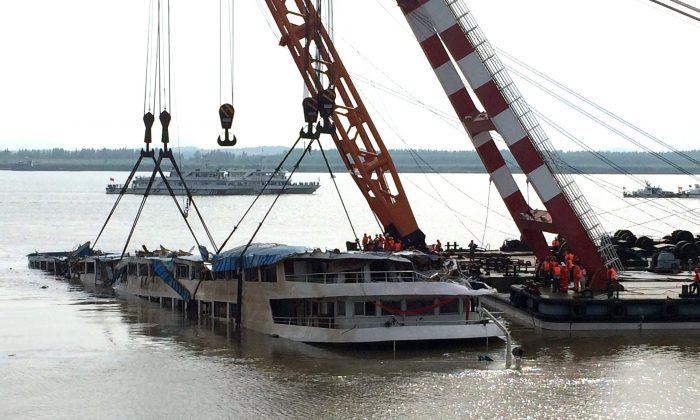 Cranes raise the "Eastern Star" cruise ship after it had previously overturned in a storm on the Yangtze river, off Jianli, in China's Hubei province, June 4, 2015. (STR/AFP/Getty Images)
China

JIANLI, China—The banged-up, white-and-blue Eastern Star emerged from gray waters of the Yangtze River on Friday as Chinese disaster teams raised the capsized ship with cranes to better search for nearly 340 people still missing. So far, 103 bodies have been found.

The focus shifted from finding survivors to retrieving bodies trapped since the river cruise ship capsized suddenly during a storm Monday night on the trip from Nanjing to Chongqing.

Authorities have attributed the accident to weather, but also have placed the surviving captain and first engineer under police custody. Passengers’ relatives have raised questions about whether the ship should have continued its cruise after the storm started and despite a weather warning earlier in the evening.

In a sign of potential unrest among the hundreds of relatives who have descended on the small Hubei province county of Jianli, one distraught family member burst into a gathering of journalists to complain about their treatment and demand an investigation into possible human error.

“All the emphasis is on a natural disaster … but we think that this is unjust,” said Xia Yunchen, a 70-year-old university lecturer. “Apart from natural disaster were there other causes? Is this not rational to ask?”

Xia, whose older brother Xia Qinchen, from the eastern coastal city of Qingdao, was a passenger, demanded that relatives be allowed to view their loved ones’ bodies before they are cremated. In past disasters, authorities have instead cremated bodies and delivered ashes to the victims’ families, in keeping with the tight management of the aftermath of disasters and fears of spiraling unrest.

“Why do you view the common people as your enemies?” Xia cried out. “There’s no human feeling, can’t we change this habit?”

Many of the more than 450 people on board the cruise ship were reported to be retirees taking in the Yangtze’s scenic vistas.

With 103 confirmed dead and 339 missing, the capsizing is likely to become the country’s deadliest boat disaster in seven decades. The 14 survivors include three who found air pockets in the overturned boat and were pulled out by divers on Tuesday after rescuers tapped the hull and heard yelling in response.

Cranes righted the boat Friday morning after some 50 divers attached chains to it overnight, Transportation Ministry spokesman Xu Chengguang said, adding that disaster teams would now focus on finding and identifying bodies. The boat was gradually lifted out of the river as water drained from its cabins.

Police and paramilitary troops stationed on the riverbank have blocked access to the site, and authorities have tightly controlled media coverage.

Records show the capsized ship was cited for safety violations during an inspection in 2013, according to a Nanjing’s Maritime Safety report, which didn’t specify the violations.

The shallow-draft boat was not designed to withstand winds as heavy as an ocean-going vessel can. Weather authorities have said the storm the boat encountered had winds up to 80 miles (130 kilometers) per hour.

China’s deadliest maritime disaster in recent decades was the Dashun ferry, which caught fire and capsized off Shandong province in November 1999, killing about 280.

The Eastern Star disaster could become the country’s worst since the sinking of the SS Kiangya off Shanghai in 1948, which is believed to have killed anywhere from 2,750 to nearly 4,000 people.