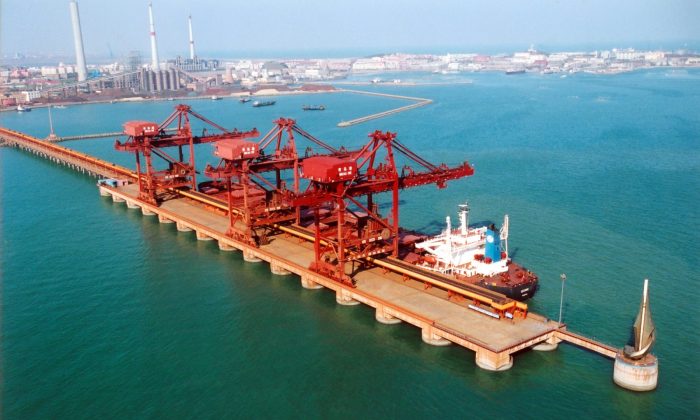 The Port of Qingdao in Shandong Province, eastern China. (Courtesy of megaconstrucciones.net)
News

If you have ever been fooled into playing a shell game you know the feeling of disappointment when you find out the ball is not there. The same thing is now happening in China.

According to a Reuters report, authorities in the northeastern port of Qingdao have stopped shipments of aluminum and copper because of an investigation. The reason? Metal supposedly stored in the warehouse might actually not be there.

“There is a scramble for people to head down there at the minute and make sure that their metal that they think is covered by a warehouse receipt actually exists,” a source based in Singapore told Reuters.

Chinese and foreign companies alike use the warehouses at the port to temporarily store shipments of metals and other goods for import and export and trust the warehouses to safe-keep the goods until they are shipped to their final destination. They get a receipt from the warehouse to confirm the ownership of the goods.

As with everything in China, however, the story is a bit more complicated. Because the banking system is mostly state-controlled and limits lending to certain sectors, other financiers and companies have found ways to lend and borrow money on their own, so-called shadow banking.

The way it works: A company ships copper (or other metals) to the warehouse and gets a receipt. It can then deposit this receipt with another company or bank that is not state-controlled to get a short-term loan. This would be fine because the loan is secured by the amount of metal in the warehouse. Should the borrower default, the lender has a pledge on these goods, which are “hypothecated,” or mortgaged.

But the buck doesn’t stop here. In a process called rehypothecation, the original warehouse receipt is mortgaged several times to different lenders. As long as nobody in the daisy chain defaults and everyone repays their loan on time, it appears that nothing has happened.

The owners of the metal get back their goods and the lenders get paid their loans plus interest. In practice, the receipts get used three or four times, with only one load of goods backing it.

If one borrower in the chain defaults, the lender will try to collect the collateral only to find out that multiple other parties also have a claim on the assets. This is exactly the reason why authorities are conducting the investigation in Qingdao.

One employee of a company with operations at the port told Reuters:

“We hear the discrepancy is 80,000 tons of aluminum and 20,000 tons of copper, but we hear that the volumes will actually be higher. It’s either missing or it was never there. There have been triple issuing of documentation.”

Once confidence in the system breaks, lenders will pull their loans unexpectedly, making borrowers scramble for cash. Some of the borrowers will not make the repayment, causing a run on the bank (the warehouse), only to find out that the shell was never there to begin with.