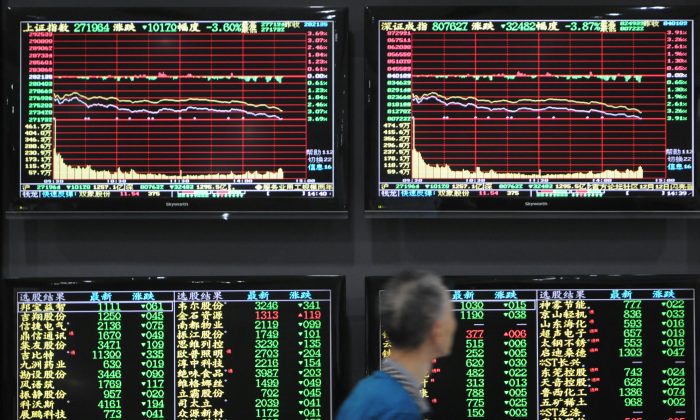 SHANGHAI—China stocks tumbled on Oct. 8, as investors back from a long holiday dumped shares across the board even after Beijing’s weekend move to spur more lending at a time of increasing fears about the economic impact of the Sino-U.S. trade war.

Spot yuan ended at its lowest official close in seven weeks against the U.S. dollar as expectations of more easing measures by China, plus surging U.S. bond yields, put pressure on the Chinese currency.

Beijing has stepped up liquidity support across the financial industry in recent months as policymakers have focused on calming fears of capital outflows, and sought to soothe battered markets as anxiety grows that the tit-for-tat trade war with the United States could deal a damaging blow to the broader economy.

“China’s economy is under heavy downward pressure…and you need time to observe if recent easing measures are effective or not,” he added.

For the year, both Chinese indexes are down about 18 percent.

In Hong Kong, the benchmark Hang Seng Index dropped 1.4 percent to close at its lowest points in 15 months, extending last week’s 4.4 percent loss as investors worried about tensions between the U.S. and China.

Oct. 8 was the first chance for mainland investors to react to the escalating trade tensions and a sell-off in Hong Kong markets last week after a week-long holiday on the mainland to celebrate National Day.

On Oct. 7, the People’s Bank of China (PBOC) announced a 100-basis-point cut to banks’ reserve requirement ratio (RRR), stepping up efforts to support the economy and calm market worries.

“An RRR cut is not enough to counter the impact of the trade war. The economy is quite weak, and I see a growing number of companies putting their assets up for sale” due to pessimism, said David Dai, general manager of Shanghai Wisdom Investment Co Ltd, a hedge fund.

“And today’s fall is not surprising after weak performance in external markets during the holiday.”

And on Oct. 5, Chinese technology stocks listed in Hong Kong, including Lenovo and ZTE Corp, slumped on a Bloomberg report that the systems of multiple U.S. companies had been compromised by malicious computer chips inserted by Chinese spies.

China’s IT sector fell sharply on Oct. 8, tumbling over 5 percent as they played catch-up with their Hong Kong peers. Shenzhen-listed shares of ZTE was down over 8 percent at close.

Real estate consumer and healthcare sectors were also among the biggest casualties, all tanking more than 4 percent.

The market’s obliviousness toward the RRR cut–China’s central bank said the move would inject a net 750 billion yuan ($109.2 billion) in cash into the banking system–highlights concerns that monetary easing alone would do little to heal battered confidence.

“Cutting RRR at a time of relatively ample liquidity in the banking system is not likely to have much effect,” wrote Zhao Jian, a finance professor of the University of Jinan.

“Liquidity is not the issue. The issue is the loss of confidence,” said Zhao, adding China is in a “liquidity trap” where there’s a shortage of credit demand from the real economy, especially the private sector.

Yields of China’s 10-year central government bonds have been trending lower this year, standing at 3.633 percent on Oct. 8. That compares with the 3.227 percent yield for U.S. bonds, the highest level since May, 2011.

“The narrowing interest rate differentials between China and the U.S. will exert more downward pressure on the RMB,” wrote Nathan Chow, strategist at DBS Group Research.

The spot market opened at 6.9000 per dollar and registered its weakest official closing level since mid-August, at 6.9135. The last close before the long holiday was 6.8725 to the dollar.

The onshore yuan has weakened about 5.5 percent against the dollar this year.

Reflecting expectations of further yuan weakening, the one-year non-deliverable yuan futures in Hong Kong fell to around 7.015 against the dollar on Oct. 8, the lowest level in 15 months.