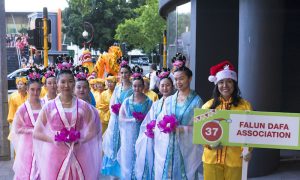 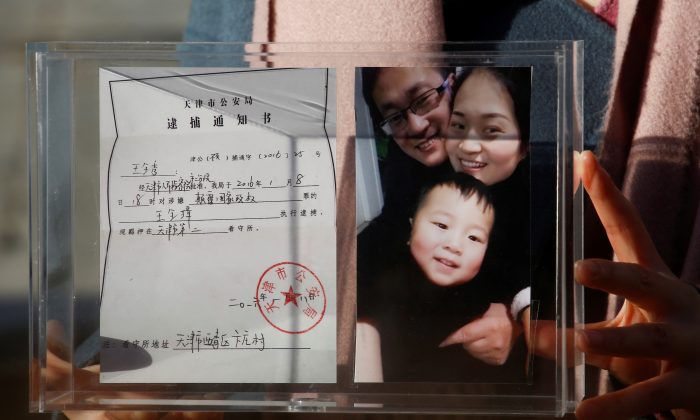 Li Wenzu, the wife of prominent Chinese rights lawyer Wang Quanzhang, holds a box with a family picture and the detention notice for her husband before shaving her head in protest in Beijing, China, Dec. 17, 2018. (Thomas Peter/Reuters)
China Human Rights

A Chinese court on Jan. 28 sentenced prominent human-rights lawyer Wang Quanzhang to four and a half years in prison for subversion of state power.

Wang, who had taken on cases deemed sensitive by the ruling Chinese Communist Party (CCP)—such as accusations of police torture or defending members of the banned Falun Gong spiritual movement—went missing in August 2015, amid a sweeping crackdown on rights activists and lawyers.

In a short statement on its website, the Tianjin No. 2 Intermediate People’s Court in the northern city of Tianjin released the verdict, saying that Wang had been found guilty. Human Rights Watch researcher Yaqiu Wang said the sentencing made a “mockery” of the Chinese leadership’s claims to be a champion of the rule of law.

After Wang’s Dec. 26 hearing, the United Nations called for Chinese authorities to “ensure his due process rights are respected” and said that there were “serious human-rights concerns” about the way his case had been handled.

According to China’s criminal laws, the time a suspect spends in detention prior to being sentenced is deducted from any jail time, meaning that Wang should be released earlier than his sentenced time period, Human Rights Watch’s Yaqiu added.

China’s Justice Ministry didn’t respond to a faxed request for comment on the case.

During his court appearance, Wang fired his state-appointed lawyer, according to his wife, Li Wenzu, who was unable to attend due to being barred from leaving her Beijing home by Chinese police and state security agents.

It is unclear whether Wang defended himself during the trial, or whether he will appeal the sentence.

Wang’s case has been shrouded in secrecy and uncertainty, as authorities have released little information about his well-being, and have denied access to Li and the seven lawyers she had appointed to defend him.

One of the lawyers, Yu Wensheng, had been Wang’s defense attorney before being stripped of his license and then arrested in January. He is now being investigated for “inciting subversion,” a charge often used to prosecute dissidents and rights activists.

Police turned Western diplomats and foreign journalists away from the courthouse on the day of Wang’s hearing and detained activist Yang Chunlin, who had traveled to Tianjin to support Wang.

An indictment document from 2017 said that Wang had “for a long time been influenced by infiltrating anti-China forces” and had been trained by overseas groups and accepted their funding.

China routinely rejects foreign criticism of its human-rights record, saying all Chinese are treated equally in accordance with the law and that foreign countries have no right to interfere.

Wang’s wife, Li, said Wang was a fearless lawyer who chose to represent Falun Gong practitioners because most other attorneys wouldn’t take the case.

“[He told me] if he was afraid and didn’t take these cases, then no one would do it. These people need help. What are they going to do?” she said.

Wang’s unrelenting defense of Falun Gong practitioners led him to be beaten by court officers on multiple occasions, Li said.

“A lawyer told me that he seems to be the one being roughed up most often,” she said. “Usually, it’s because he was particularly persistent and angered the bailiffs. He wouldn’t back off even if they beat or threatened him.”

In one case, in which Wang defended a Falun Gong practitioner, she said a lawyer told her that the court officer slapped his face for every sentence he spoke.

“I was told that he had been slapped more than 100 times,” Li said.

In June 2015, Wang detailed on ChinaChange.org how he was beaten by court officers for 10 minutes after his tenacious defense of several Falun Gong practitioners in Shandong Province.

“A dozen or so bailiffs rushed into the courtroom. Some gripped me by the arm, one clenched me by the throat, and they hauled me out,” he wrote. “At this point, someone had started fiercely punching me in the head; others were hurling abuse … I was dragged into a room on the first floor of the courthouse and was ordered by one of the police to kneel. I refused. They started beating me again.”

Li has vocally championed her husband’s case in the three years since he went missing, staging a 62-mile march from Beijing to Tianjin, shaving her head to protest his treatment, and filing almost weekly petitions to the Supreme People’s Court.

Li told Vision Times in September 2018 that she has been arrested, monitored by police, and put under house arrest for appealing her husband’s detention.

Earlier last year, Li set off on a march of more than 60 miles from Beijing to Tianjin city, where she believed her husband was being held.

According to Li, she was arrested in June for protesting in front of the detention center in Tianjin city. She carried red buckets labeled with words of support, such as “Love you” and “Waiting for you.”

“The police came up and pointed at me and said: ‘Come to the police station with me!’ ” she told the outlet.

Li also said her 5-year-old son was banned from attending kindergarten in Beijing.

Epoch Times staff member Cathy He contributed to this report.