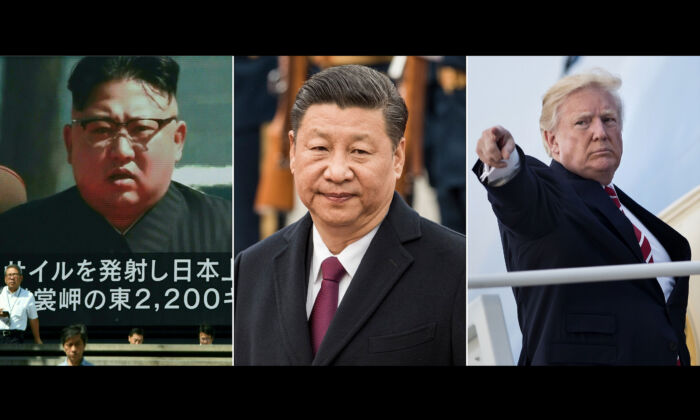 Chinese leader Xi Jinping will dispatch a special envoy to North Korea on Friday—a week after President Donald Trump left China—with speculations rife as to what message that envoy will deliver.

Song Tao, the head of Beijing’s International Department, heads to North Korea at a turbulent time in North Korea-China relations. Trump greeted the news enthusiastically in a tweet Thursday morning.

China is sending an Envoy and Delegation to North Korea – A big move, we'll see what happens!

The Chinese regime’s official line is Song is going to update the Kim regime on the results of China’s Communist Party congress last month, but there are two other very divergent possibilities.

One possibility is that Song is going to assure the North Korean regime that it still has the Chinese Communist Party’s support.

That possibility has some proponents among Chinese academics.

“The US and its allies hope that China will raise the threat of military strikes and impose harsher economic sanctions against North Korea,” Shi Yinhong, a government adviser and director of the Centre for American Studies at Renmin University in Beijing told The Telegraph.

“But China will inform North Korea that it opposes such actions.”

If that’s true, it would contradict Xi’s recent public statements opposing North Korea’s nuclear program and calling for the denuclearization of the Korean Peninsula.

The other possibility is that Song is going to North Korea to convey the Chinese regime’s firmer opposition to North Korea’s nuclear program, and to pressure the Kim regime to come to the negotiating table.

That possibility is backed up by China’s continued implementation of United Nations Security Council sanctions and the reportedly close ties between Xi and Trump.

Trump said he spent hours with Xi Jinping during his time in China having detailed conversations about North Korea and how to handle that situation.

The two men had “good chemistry” said Trump, who has been widely praised in Chinese state-run media.

The U.S. President went to China on a three-pronged mission to start rebalancing trade, advocate for an open and free Indo-Pacific region, and to push the Chinese regime to take stronger measures against North Korea.

According to the senior Trump administration official, the United States believes China views North Korea as a severe strategic liability.

If that is the case, it could give Xi personal motivation to do what Trump has requested.

While Trump offered Xi praise, often in his public remarks while in China, he also called on the Chinese leader to take rapid action on North Korea.

“We must act fast, and hopefully China will act faster and more effectively on this problem than anyone,” said Trump during remarks at an event in Beijing on Nov. 9.

China’s historic protection of North Korea predates either country’s communist takeover, but their relationship has recently taken a tense turn.

North Korea’s pursuit of nuclear weapons has unsettled Beijing’s gradual rise in influence in the region by elevating the U.S. military presence there and bringing South Korea, Japan, and the United States closer to a trilateral military alliance.

Kim’s provocations have also given South Korea enough cause for concern that it deployed U.S.-supplied THAAD anti-ballistic missiles and radars despite punitive economic measures by Beijing.

The Chinese regime eventually relented in the boycott of South Korean goods and restrictions on Chinese tourists traveling to South Korea that cost the South Korean economy billions. In exchange, China secured promises that South Korea will not deploy more THAAD systems, join U.S. missile defense systems, nor form a trilateral alliance with Japan and the United States.

That scenario exemplifies the challenge Xi is facing as he is pulled between a historic alliance and current realities.

So far, most evidence points to the latter option. The internal politics of China also support that.

Xi is in the final leg of a factional showdown with former Chinese leader Jiang Zemin and the allies Jiang had entrenched throughout the party and government.

While Jiang and his allies had close relations with North Korea, Xi has pursued closer ties with South Korea, even visiting the country without a corresponding visit to North Korea.

Facing the prospect of a U.S. invasion on the Korean Peninsula, Xi has even more motivation to back U.S.-led sanctions at the United Nations Security Council and implement them faithfully.