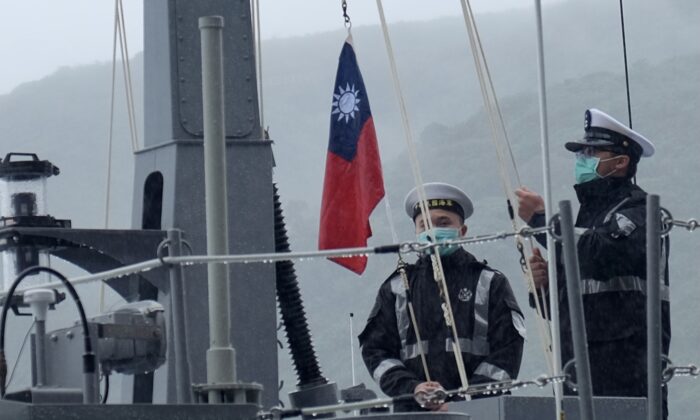 The incident has drawn concern from current and former U.S. officials.

An ADIZ is a publicly declared area next to a state’s national airspace, in which approaching foreign aircraft must be ready to submit their identifiers and location. The area allows a state the time to judge the nature of the incoming aircraft and take defensive measures if needed.

The Chinese regime has undertaken similar incursions over the past year in an effort to intimidate the democratic government in Taiwan and coerce the Taiwanese public into accepting CCP rule.

Beijing’s warmongering attitude toward Taiwan was evident in an article published by China’s hawkish state-run media Global Times. The article argued that the latest aircraft incursion, which it called a “routine drill,” showed the Chinese military’s “overwhelming advantage” over Taiwan’s armed forces.

The article claimed that, as a result, such a “power gap” between the two sides would allow the Chinese communists in Beijing to safeguard “territorial integrity, even if foreign forces interfere.”

Beijing seeks to impose its rule on Taiwan—either through war or other means to undermine the island’s democracy—because the regime sees the island as a part of its territory. Taiwan, a de facto independent country, has diplomatic relations with 15 nations and maintains informal ties with others, including Japan and the United States.

“The United States must always stand with Taiwan and for freedom,” wrote former U.S. Secretary of State Mike Pompeo on his Twitter in response to the latest incursion.

“Communist China & other adversaries will continue to probe the resolve of the U.S. & our allies after Biden’s debacle in Afghanistan,” he added.

In March, Hagerty told The Epoch Times’ sister outlet NTD that the United States cannot “backslide” on China under the Biden administration. He added that “China has been aggressive and predatory from a military standpoint, from a diplomatic standpoint, and from an economic standpoint for so many years.”

The regime in Beijing has exploited the chaotic U.S. withdrawal from Afghanistan to feed its anti-U.S. propaganda, with the intention to undermine American leadership around the world. The Global Times state mouthpiece has published a number of articles arguing that the United States would “abandon” Taiwan just like it had done to Afghanistan.

“We stand by, as is outlined in the Taiwan Relations Agreement … We stand by partners around the world who are subject to this kind of propaganda,” she said.

While Washington ended its diplomatic ties with Taipei in favor of Beijing in 1979, it has maintained a robust relationship with the island based on the Taiwan Relations Act (TRA). The act authorizes the United States to provide the island with military equipment for its self-defense.

Tsai Shih-ying, a legislator from Taiwan’s ruling Democratic Progressive Party, told local media on Sept. 6 that the latest incursion showed the importance of increasing the island’s military budget to enhance its self-defense.

Kelly Craft, who served as U.S. ambassador to the United Nations during the Trump administration, recently criticized the CCP for having “exploited the deaths of U.S. servicemen and women and Afghan citizens to cast doubt” on the U.S. commitment to Taiwan.

She made the remarks during the annual Ketagalan Forum: Asia Pacific Security Dialogue on Aug. 31. The event, held virtually this year, was co-organized by Taiwanese think tanks and Taiwan’s Ministry of Foreign Affairs.

“Without Taiwan, we lose the Pacific. We are, after all, a Pacific nation and cannot afford to cede our fate to communist China,” Craft added.

On Aug. 16, President Joe Biden said a U.S. withdrawal from Afghanistan would allow the United States to focus on more pressing issues, including dealing with communist China.

“Our true strategic competitors—China and Russia—would love nothing more than the United States to continue to funnel billions of dollars and resources and attention into stabilizing Afghanistan indefinitely,” Biden said.