China Sends Aircraft, Vessels Near Taiwan After President Tsai Writes to the Pope 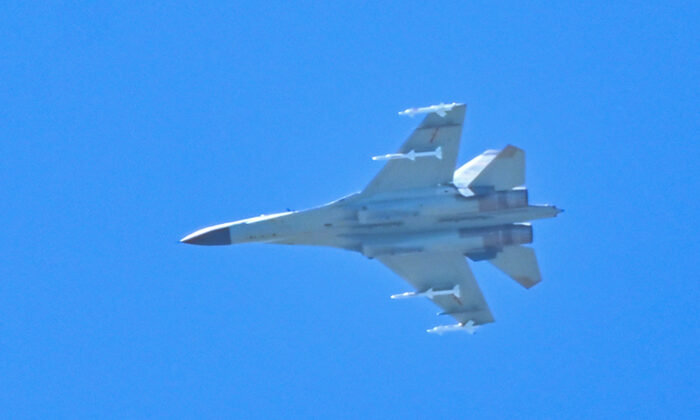 A Chinese military jet flies over Pingtan Island, one of mainland China's closest point from Taiwan, in Fujian Province, on Aug. 5, 2022. (Hector Retamal/AFP via Getty Images)
By Aldgra Fredly

The Chinese military aircraft and naval vessels were detected at around 6 a.m. (local time). There was no indication that the aircraft crossed the Taiwan Strait median line or into Taiwan’s airspace, according to the ministry.

But the CCP’s latest show of force came after Tsai told Pope Francis in a letter on Jan. 23 that constructive interaction with China is only possible if the CCP respects Taiwan’s democracy and freedom.

Tsai cited a speech she gave in October 2022 in which she emphasized that war with China is “absolutely not an option” and that Taiwan is willing to engage with the CCP to reach a “mutually agreeable arrangement.”

“I made clear that only by respecting the commitment of the Taiwanese people to our sovereignty, democracy, and freedom can there be a foundation for resuming constructive interaction across the Taiwan Strait,” she said.

The Taiwanese leader wrote the letter in response to the pope’s World Day of Peace message on Jan. 1.

The Vatican is Taiwan’s sole European diplomatic ally, and Taiwan has watched with concern as Pope Francis has moved to improve relations with the CCP. Taiwan has formal ties with only 14 countries, largely due to Chinese pressure.

Taiwan has been a self-governing democracy since the Chinese civil war ended in 1949. Still, the CCP regards Taiwan as a breakaway province that must be united with mainland China by any means necessary.

Tsai made a similar assertion in her New Year’s speech, ruling out armed confrontation with China and urging the CCP to cooperate in achieving regional stability.

She said that Taiwan is willing to assist the CCP in dealing with its recent surge in COVID-19 cases despite rising cross-strait tensions.

“If need be, we are willing, out of humanitarian concern, to provide necessary assistance to help more people get through the pandemic and enjoy good health and peace of mind in the new year,” Tsai said on Jan. 1.

China has seen a surge in COVID-19 cases after the CCP abruptly lifted its strict zero-COVID policy last month. According to officials and studies, most of the population has been infected, and crematoriums and hospitals have been overwhelmed.

Tsai didn’t specify the nature of assistance Taiwan could offer China but noted that the two countries faced common challenges.

“War has never been a way to solve problems, and only through dialogue, cooperation, and joint efforts toward the goals of regional stability and development can we help more people enjoy security and happiness,” she said.

CCP Could Potentially Invade Taiwan in 2027

Taiwanese Foreign Minister Joseph Wu said on Jan. 18 that China is “more likely” to make a move against Taiwan in 2027. Wu noted that Chinese leader Xi Jinping might see aggression against Taiwan as a way to leave a legacy from his third term in office.

“To me, 2027 is the year that we need to watch out … because of the domestic power situation in China,” Wu said in an exclusive interview with Sky News on Jan. 18.

“In 2027, Xi Jinping is likely to go into his fourth term. And if in his previous three terms, he cannot claim any achievement during his office, he might need to think about something else for him to claim as his achievement or his legacy,” he said.

Wu pointed to the looming situation that the Chinese regime is facing. “If you look at the Chinese situation right now, the economy is going down. People are not happy; the real estate business seems to be melting down,” Wu said.

“If Xi Jinping cannot change the situation domestically in China, [he] might want to resort to a use of force or creating a crisis externally to divert domestic attention or to show to the Chinese that he has accomplished something.”

According to Wu, Xi might see an invasion of Taiwan as a way to distract from China’s domestic problems.

“We are concerned that Taiwan might become his scapegoat,” he said.

The CCP regularly uses its military to intimidate Taiwan, as seen on Dec. 25, 2022, when it sent 71 planes and seven ships toward the island in its largest show of force since former U.S. House Speaker Nancy Pelosi (D-Calif.) visited Taiwan in August 2022.

With these exercises, “the Chinese want to threaten Taiwan into submission, so they want to conquer Taiwan without using military force to attack Taiwan,” Wu said.

Hannah Ng and Reuters contributed to this report.