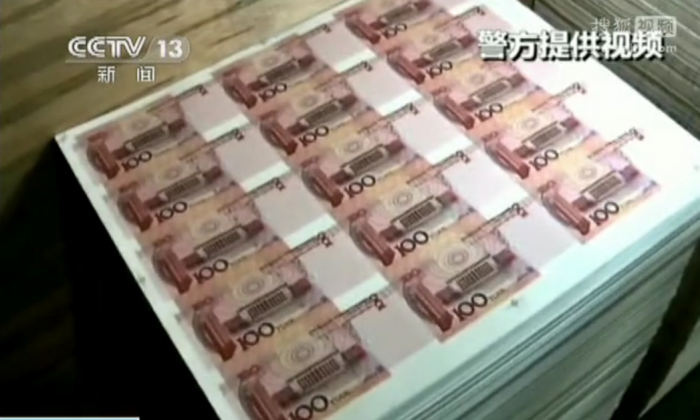 Chinese police recently uncovered over eight million yuan ($1.3 million) in counterfeit currency in Taizhou City of eastern Zhejiang Province, according to state news media.Police said that the money seemed uncannily similar to real currency, and that even a counterfeit detector failed to identify them, let alone the naked eye. They all had an identical beginning serial number, however. The money, all 100 yuan ($16) bills, was seized from suspects who buy them wholesale from producers in Guangdong Province for the price of 3.6 yuan (60 cents) per bill. The suspects said they then sold them on for 13 yuan ($2) per bill.Taizhou police tracked the group through a minor incident in April. A man used a 100 yuan bill to buy a 20 yuan mug at a store in a rural area of Sanmen County in Zhejiang. But after receiving 80 yuan in change, he left in a hurry—neglecting to take the mug. The store manager found it strange, and then realized the 100 yuan bill was a fake.Counterfeit currency has appeared recently across China, including in Beijing, Shandong, Liaoning Province, and elsewhere, reports say. Police don’t know how much fake currency is in circulation.Reports have appeared periodically about fake money turning up in China. Counterfeit 100 yuan bills made in 2005 are still found now and then, but they can be identified by a detector, and are not nearly as sophisticated as the new counterfeits.