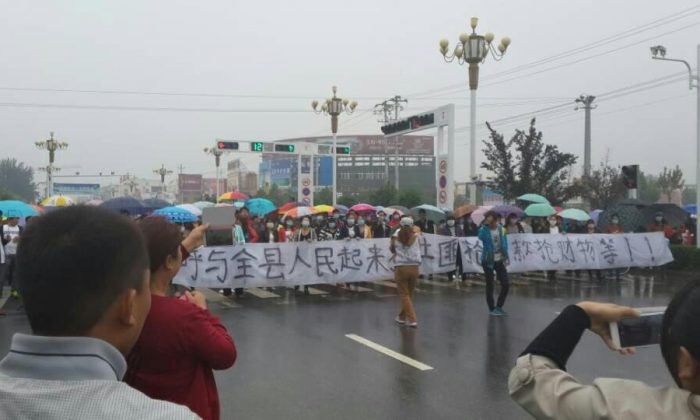 Thousands of citizens protested pollution from a chemical plant in central China’s Henan Province on Sept. 15, urging the local government to shut down the plant. The protest has lasted for seven days. (Screenshot/Weibo.com)
China

Thousands of citizens have kept up protests for over a week against a chemical plant that emits a putrid odor in central China’s Henan Province. Residents in Huojia County of Xinxiang City are urging local officials to close the plant down.

Street protests outside the Zhongxin Chemical Factory in the center of the city started on Sept. 9. The factory was built in 2010, and has all along been the object of frustration by locals, who say they are irritated by the smell it emits, and forced to live with the water it pollutes. An explosion incident at the plant last year killed five people, leading to it being shut down for a year.

The factory has continued production this year, however, and recently built seven more plants nearby. It was this expansion that triggered the recent, mass resistance.

The chemical produced by the factory is methanol, an industrial alcohol that has a wide variety of applications.

Outraged residents have protested in front of the county government building, yelling slogans and holding banners written with “object to pollution,” and “we urge the government to clean up polluting enterprises, return us clear waters and blue skies.” Many protesters wore face masks with slogans outlining their complaints. Locals estimate that there have been at least 1,000 participants every day, with about 10,000 during busy periods.

Dozens of residents pitched tents outside the chemical factory overnight, though they were raided by police on Sept. 14, their belongings and cell phones confiscated. After the raid, 2,000 turned out until late in the evening, expressing their displeasure at the police behavior.

On Sept. 15, heavy rain didn’t deter over 2,000 residents from continuing their protests, both against local officials and police. A group of police holding shields and batons came out to shut the protesters down, and 10 who put up resistance were arrested, according to local television news.

“The police beat whoever yelled slogans, and they dragged protesters into the police station,” an eyewitness, who requested anonymity, told the Epoch Times in a telephone interview.

Photographs online show a protester’s head covered with blood after being beaten by police.

“We common people just want to breathe fresh air and drink clean water without chemical pollution. Why is it so difficult? Just where should we go with our request?” another anonymous resident told Epoch Times.

Local Party officials have not given much of a substantive response to the grievances. Repeated phone calls to the county office went unanswered.

In recent years an increasing number of residents have been diagnosed with respiratory infections, esophageal cancer, and larynx cancer—diseases that locals have linked to the pollution of air and water from the chemical plant.

“The Huojia County will soon become a cancer county,” a resident said.

With reporting by Gu Xiaohua