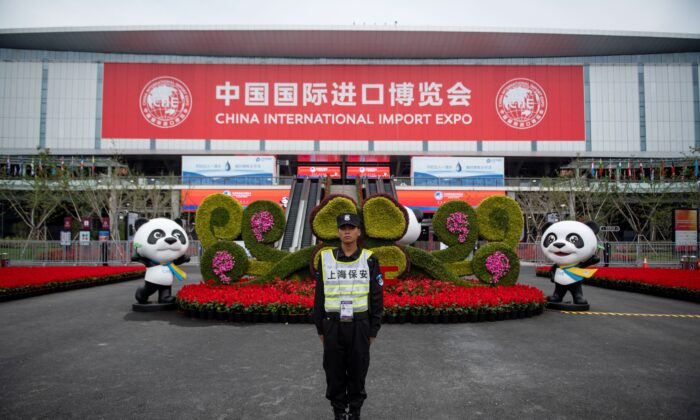 A security guard stands at the entrance to the first China International Import Expo (CIIE) in Shanghai on Nov. 5, 2019. Chinese leader Xi Jinping vowed on Nov. 5 to open access to China's economy, while delivering a veiled rebuke to the Trump administration, as he kicked off an import fair amid growing foreign accusations that his government was backtracking on reform pledges. (Johannes Eisele/AFP via Getty Images)
Thinking About China

China Sees Risks With or Without Trade Agreements

Does China actually want a new trade deal with the United States or the European Union? Given the current situation in the country, the realization of any trade deal that is actually signed is less than certain.

As much as President Trump talks up the potential signing of “phase one” of a new trade deal, the facts of China’s current economic decline just don’t point to a real, enforceable agreement. The risks associated with entering into new trade agreements, or not, cut both ways.

Can China Even Afford Phase One?

The much-touted phase one agreement supposedly has China purchasing $50 billion in American soybeans. Such levels would double 2013 highs of $29 billion in U.S. soybean exports to China. There’s no market precedent for such high levels of imports from the United States, especially with China buying soybeans from Brazil and other suppliers. With its purchase of Brazilian soybeans and its falling GDP, there’s no good reason to think China will be buying record levels of soybeans from the United States.

The phase one agreement would also increase the protection of foreign intellectual property (IP) and provide relief to the forced technology transfers that come with doing business in China. But is China about to allow foreign companies to withhold their IP and therefore increase their market share requirements at the expense of purely Chinese firms? Again, in the current state, there’s no real economic reason for the CCP to agree to do so, much less actually follow through on such an agreement.

A good indicator of China’s intentions would be the results of last year’s debut of the China International Import Expo (CIIE), as reported by the South China Morning Post. According to the European Union Chamber of Commerce, as the second CIIE gets underway, nearly half of the deals China signed in 2018 have yet to materialize. The stated objective of the CIIE is to increase European companies’ access to the Chinese market.

Carlo Diego D’Andrea, chairman of the Shanghai branch of the chamber, said, “We want to see notable progress in providing European companies with the same unrestricted access to Chinese markets with their Chinese counterparts in the EU.” Unfortunately, 47 percent of Chinese companies that signed deals were unable, or unwilling, to deliver on their business commitments.

China both needs foreign investment and fears it, frustrating the efforts of U.S. and EU firms. Under the current trade war challenges, that’s more than understandable. Declining economic activity abroad combined with near-zero domestic growth are proving difficult for Chinese firms to manage. They’re under economic as well as political pressures to keep their market shares for themselves.

For both U.S. and EU companies, however, meager progress on getting access to Chinese markets is, unfortunately, the natural outcome of those pressures. The EU is warning China of “promise fatigue” ahead of this year’s CIIE.

That fatigue may well apply to the United States as well. Rising protectionism is a fundamental hurdle that all foreign firms are finding increasingly difficult to overcome. Market barriers such as restrictions on foreign direct investment, state-owned enterprise subsidies, the long-term policy of forced technology transfers, and the requirements of regional governments to “buy Chinese” remain in force. As a result, the business climate for foreign firms operating or seeking to expand in China is even less friendly than before.

But it’s not just that China desires to keep much of its markets closed to foreign competitors, but that it desires to keep the Chinese cyber environment open. China seeks to prevent the use of virtual private networks, it restricts data encryption, it doesn’t like cross-border data transfers and other data use and protection means and requirements. These aspects of China’s surveillance state prevent foreign firms from protecting their data and intellectual property, and they stifle cooperation.

One area in which China is now eager to open its market to U.S. and European firms, however, is the financial sector. According to China’s chief banking regulator, foreign financial firms own just 1.6 percent of Chinese banking assets and just 5.8 percent of the insurance market. But all that may be about to change.

In a recent statement, China’s central bank said that foreign investors can take equity stakes or even controlling positions in entities involved in commercial lending, pension funds, currency trading, and other financial operations. This unprecedented level of foreign access to China’s financial sector was announced last week after given approval by Vice Premier Liu He. He acknowledged that risk management and other challenges will be a priority to the country’s $44 trillion financial market.

But the timing of China opening its massive financial sector to foreign financial firms is suspicious. With a serious and growing liquidity problem in both its banking and non-banking financial institution sectors, as well as the deadweight of trillions of dollars of underperforming or even zombie loans, China’s rosy invitation to foreign financial giants definitely comes with some thorns.

More critically, foreign firms’ engagement with China’s vast financial market may not be nearly as easy or rapid as Chinese authorities would like it to be. There are huge and fundamental differences between Western, credit-worthiness-based lending institutions and China’s politically driven, state-owned banks. Determining the value and health of financial institutions may be more problematic as hidden debt and liquidity issues are exposed. As Bloomberg notes, “global firms need to navigate an often opaque regulatory environment and take on state-controlled [financial] rivals that drive much of China’s economic activity.”

It’s no secret that the Chinese economy is suffering from the multiple impacts of the trade war. Domestic growth continues to be negative, foreign reserves are dwindling, and China’s export-led economy struggles to find relief in European and Japanese markets. The truth is that no matter what the Chinese offer to sign or really do sign, the only agreements that will see fruition are those that will benefit China most with the least political risk.

Contrary to what Party bluster says, the Chinese Communist Party (CCP) leadership knows it’s in a tough position. It needs to sell products to the West for its very economic survival. But U.S. and EU firms are demanding more access to China’s markets. That presents increasing competition for Chinese firms, and therefore, risks to the economy and ultimately, to the Party.