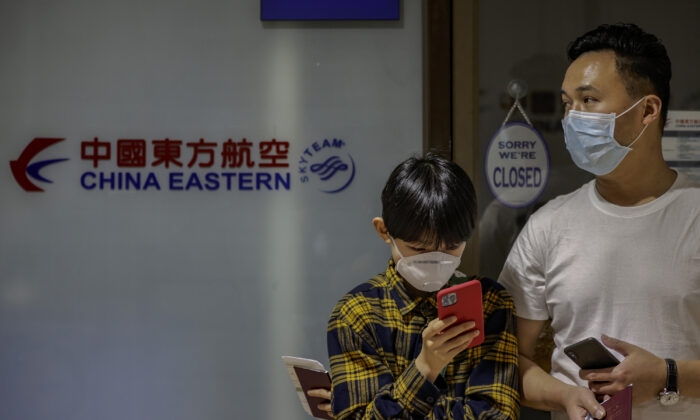 Chinese nationals, whose flight was cancelled after the Philippine government imposed travel restrictions to and from China amid the outbreak of the novel coronavirus, wait outside the closed ticketing office of China Eastern Airlines at the Ninoy Aquino International Airport in Manila, Philippines, on Feb. 3, 2020. (Ezra Acayan/Getty Images)
China Business & Economy

More than 30 billion yuan issued through Feb. 20
By Fan Yu

War bonds were once sold by the United States government to finance operations during World War II. Today, China has “virus bonds.”

Large portions of the economy are still shut down as the virus continues to spread and kill thousands. Companies are increasingly balance-sheet- and cash-constrained.

These virus bond funding programs, announced on Jan. 31, serve a dual purpose. They will provide funding to help control the outbreak as well as assist struggling companies to cover expenses until business activity picks up again.

Beijing has instructed state-owned banks and asset management firms to purchase them. To qualify for the virus bonds designation and its lenient terms, issuer companies must dedicate 10 percent or more of the proceeds to combat the COVID-19 virus.

On the surface, virus bonds are a way to finance private-sector efforts in controlling the coronavirus, while shoring up company balance sheets. The interest rate is low, and duration is short—these bonds typically mature in six to 12 months, allowing companies to refinance these loans when the economy is presumably running again.

As of Feb. 20, at least 28 companies have issued 33.5 billion yuan ($4.8 billion) worth of such bonds, according to a note by S&P Global Marketing Intelligence. Glancing at the bond information disclosures on the website of the Shanghai Clearing House, most of the issuer companies reside in hard-hit sectors.

Many companies who issued these bonds are from the transportation sector—such as China Eastern Airlines—and there’s a smattering of issuers engaged in the construction, development, energy, and consumer services sectors. Most bonds had annualized interest rates between 1 and 3 percent.

“We are one of the biggest victims of the epidemic,” an official at Shenzhen Airlines told the Financial Times. “What we need most is to reduce our financial burden,”

While necessary, mass issuances of these virus bonds signal that Beijing has given up on its recent deleveraging efforts to prioritize stimulating growth. The total size of the virus bond program, and how long Beijing keeps it running, will be telling.

But from an investors’ perspective, these bonds have no secondary market.

First, the coupons on these bonds are below convention. The virus bonds’ low interest rates are not commensurate with risks investors must take to own the bonds. Virus bond issuers are typically financially strapped firms in hard-hit sectors or locations—not exactly the most creditworthy bunch.

In addition, the outbreak shows no signs of abating. The financial positions of these companies are likely to worsen before they recover. There’s no guarantee that these firms won’t default or go bankrupt before the coronavirus is contained.

Given this dynamic, currently, almost all bond purchasers are state-owned banks or investment firms. Many of these banks face their own unique challenges arising from the outbreak.

So virus bonds are nothing more than a temporary government-led bailout of virus-stricken companies.