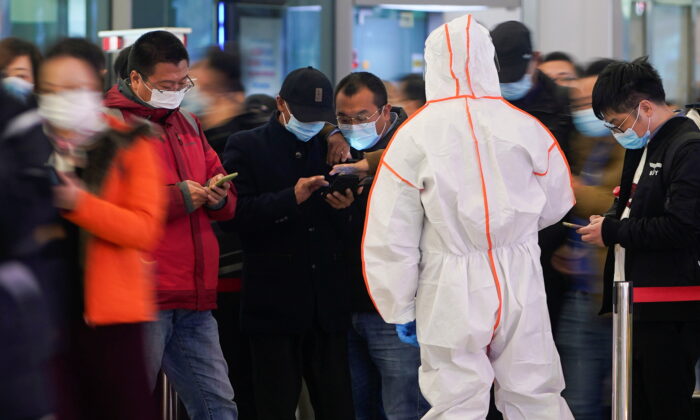 A security guard blocks an exit as he directs people to scan a QR code indicating their health status at Shanghai Hongqiao Railway Station, following new cases of the COVID-19 in Shanghai, China, on Nov. 25, 2021. (Aly Song/Reuters)
Chinese Regime

A resident in central China’s Henan Province has sued the local heath commission for allegedly manipulating her health code and causing her court hearing to be delayed.

On June 19, a resident surnamed Xie filed an administrative lawsuit with the Jinshui District Court against the local health commission of the provincial capital of Zhengzhou, according to China’s finance media outlet Caixin. She requested that the court find the commission guilty of unlawfully turning her health code yellow on the days of June 13 to 15.

The plaintiff claimed that the incident occurred when she scanned her QR code at the entrance to a local courthouse. She was there to submit documents for a hearing regarding her opposition to a request by the Working Committee on Agriculture and Rural Areas in the district of Zhongyuan to demolish her property for redevelopment.

She said she had followed local COVID rules, tested negative each the time she was tested, and traveled using public transport vehicles as she usually did prior to her visit to the court.

Two days after the courthouse visit, she reported, her health code had returned to green. Therefore, she suspects the commission manipulated her health code out of “non-COVID motivations” that is, to delay her submission of the documents required for her lawsuit about her property.

Currently, her lawsuit about the code change is in the process of document collecting for review prior to acceptance of the case.

A mainland Chinese lawyer Zhao Qing (alias) told The Epoch Times on June 21 that the case of a private individual taking a governmental body to court over the health code issue is of great significance—the first attempt of its kind in China as far as he knows. The allegations send a signal that citizens may request the court to review the legitimacy of official papers or orders, Zhao said.

“Human intervention comes before a health code turns red,” said Li, referring to the vulnerability of the system. “Otherwise, the bad practice would be impossible.”

Other signs suggest the CCP has increasingly used the repressive code system to target persons of interest, including victims seeking justice and human rights lawyers.

“The lawsuit is quite meaningful,” said the lawyer. “It has sparked much attention. Let’s see if the court will accept it and if the litigation starts off normally.”