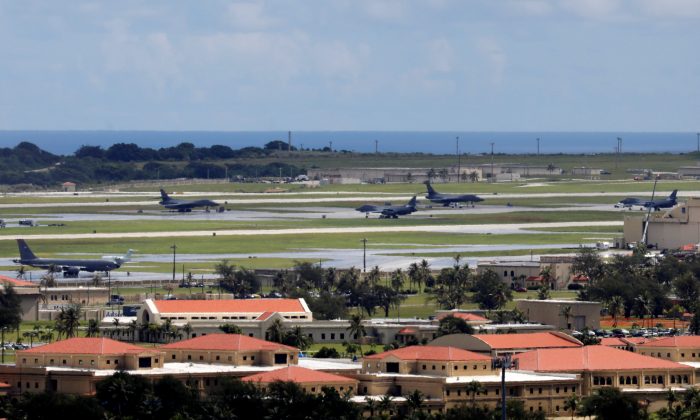 A view of U.S. military planes parked on the tarmac of Andersen Air Force base on the island of Guam, a U.S. Pacific Territory, August 15, 2017. (Reuters/Erik De Castro)
Military

China’s communist regime seeks to eject the United States from the Indo-Pacific and project power beyond its borders, according to experts, who said that the U.S. territory of Guam would be central to any Sino-American conflict.

“China’s goals in the Indo-Pacific are no secret,” said Patty-Jane Geller, a policy analyst at The Heritage Foundation.

“We know that Beijing is pursuing a force posture that would deny the U.S. from being able to operate in China’s immediate vicinity and that would also enable Beijing to project power beyond it coastlines.”

Geller made the comments during a panel hosted by the Hudson Institute, a D.C.-based think tank. The panel explored the continued strategic importance of Guam, the United States’ westernmost territory and a key hub for American power projection in the Western Pacific.

Guam is located in the Second Island Chain, which extends from eastern Japan down through the Philippine Sea to Borneo, and is considered vital to deterring the Chinese Communist Party (CCP) from attempting an aggressive invasion of the self-governed Taiwan.

Due to the territory’s location and vital importance in U.S. geopolitical strategy, it is likely to be a prime target for Chinese military aggression in the event of a conflict, and falls within range of several of China’s bombers and missile systems.

Geller said that that timeline might need to be truncated, however, given the vow of CCP leader Xi Jinping to unite Taiwan with the Chinese mainland by force if necessary.

“We don’t want to wait for a war to figure out how China’s military will work, how they’ll fight,” Geller said. “I think we need to be ready now.”

“The United States needs to continue [to prepare] for the fight that we’re seeing China interested in pursuing.”

To that end, Hudson Institute senior fellow Bryan Clark said that the United States military would need to ensure that Guam was adequately protected without making it a linchpin to American military victory.

“If we put too many eggs in the Guam basket, we open ourselves up to having to be too vulnerable because Guam may not be defensible because of the number of weapons that China can throw at it,” Clark said.

Clark added that, if the United States were to be successful, it would need to erode the CCP’s planning capabilities in effort to adversely effect its regional military dominance and disrupt its ability to internally support its military.

With that in mind, he said that the United States’ ability to create uncertainty and surprise among Chinese military leadership and mitigate its ability to amass fires on a central target was crucial to American deterrence efforts.

“We face this challenge where we’re the away team, they’re the home team, and we’re playing on their field,” Clark said of a potential conflict between the United States and China.

“They get to therefore plan things out to a degree that maybe we can’t do because, as an expeditionary force, we have to be more flexible and carry with us all our own logistics and protection.”