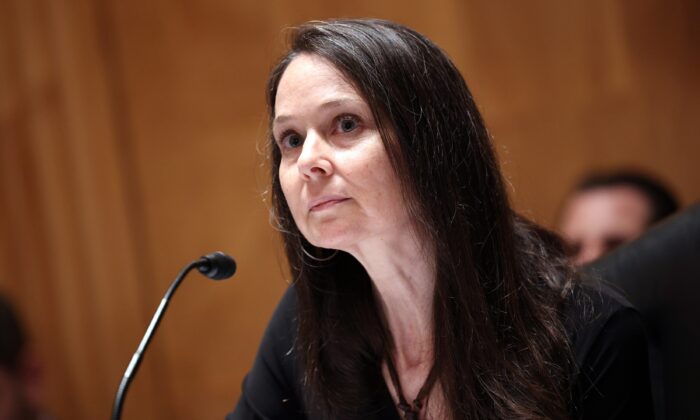 Jen Easterly, the director of Cybersecurity and Infrastructure Security Agency, answers questions during her confirmation hearing in Washington on June 10, 2021. (Kevin Dietsch/Getty Images)
By Andrew Thornebrooke

State actors that include China’s communist regime are seeking to influence next week’s U.S. midterm elections, according to the nation’s cybersecurity chief.

China, Iran, and Russia may all seek to influence or otherwise interfere with U.S. democratic processes, according to Cybersecurity and Infrastructure Security Agency (CISA) Director Jen Easterly.

“We are concerned about Russia and Iran and China trying to influence our elections,” Easterly said during a Nov. 1 talk at the Center for Strategic and International Studies, a Washington-based think tank.

“It’s a significant concern when you think about these adversaries who are trying to sow discord, that are trying to break us apart as Americans and are trying to undermine integrity in our elections.”

Easterly’s comments follow closely behind several revelations in recent months regarding how hostile foreign powers are attempting to undermine stability in the United States.

Meta Platforms, which owns Facebook and Instagram, said in September that it had disrupted several Chinese and Russian influence operations. Those operations took place on Facebook, Instagram, and Meta competitor Twitter, and appeared largely aimed at increasing political polarization among Americans by spreading false and inflammatory posts about controversial topics including race, abortion, fascism, and gun control.

Likewise, a report published in October by intelligence firm Recorded Future found that China-based actors were attempting to influence the Nov. 8 midterm elections by undermining confidence in lawmakers who were critical of the Chinese Communist Party (CCP) and in the U.S. system of government itself.

Yet another report by nonprofit Global Witness and the Cybersecurity for Democracy (C4D) team at New York University asserted that social media giant TikTok failed to prevent 90 percent of political ads with misleading or blatantly false election information, even as the company claims it doesn’t allow any political advertising.

Easterly said the need to maintain strong cyber defenses against such operations is critical, and that the United States would need to be prepared for activity designed to cause instability.

“It’s not the time to put our shields down,” she said. “We need to be prepared for potential disruptive [and] destructive activity.”

Easterly, who served 20 years as a U.S. Army officer, said that there were no credible or specific threats to election infrastructure now, but the types of influence operations seen recently could contribute to the growing number of other threats being made against Americans attempting to conduct the elections.

From physical intimidation to threats to misinformation, Easterly said the threat environment facing everyday Americans who work at the polls is more complex than ever.

To that end, Easterly said that securing elections is a nonpartisan activity, and Americans need to work together to protect the American way of life by increasing election literacy and ensuring safe and resilient conditions for poll workers.

“The federal government doesn’t run elections,” Easterly said. “It’s the state and local officials that run those elections that are on the front lines of protecting democracy.

“Election officials are not faceless backroom bureaucrats. They’re people who are dedicated public servants who live in our towns and our cities and our communities. They’re the people who we see at the bowling alley, the PTA meeting, the restaurant, and church.