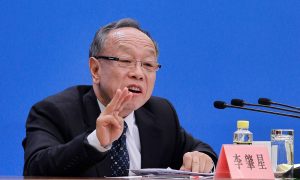 China Seeks to Dominate, but Can’t Even Make Milk Powder

There is a lot of big talk in China these days about becoming the world’s dominant power. I just wonder if China can surpass New Zealand.

Certain crooked people crow about how China has in a very short time overtaken the process of development it took the West hundreds of years to go through. Within so many more years, China will next surpass the United States, these people say.

Although this view is ridiculous, it seems patriotic, and so many people believe it, just as those suffering from an incurable illness tend to believe in charlatans’ lies. In fact, if one thinks about it carefully, what does it mean that in a very short time China finished the process that took the West a century to complete?

The West was the pioneer, and China just walked or ran on the road that the West had established. How can China compare in this case? While we made airplanes and automobiles in a very short period of time, we used others’ designs and ideas, and always copied others. How could we shamelessly say that China made progress much faster than the West?

A story about milk powder helps demonstrate the problem. I have a friend who is also a colleague from my hometown in Inner Mongolia. We both moved to Guangzhou for different periods of time. He is older than I am, and now he has a granddaughter.

Several years ago, I saw him carrying his granddaughter to visit his relatives in our hometown. His granddaughter was still in the milk-feeding stage. I asked him when he would return to Guangzhou. He said he needed to go back immediately.

At that time, we were on vacation and still had a long time before work started again. I asked him why he was in such a rush. He said it was because he had almost run out of milk powder for his granddaughter.

I thought to myself that our hometown in Inner Mongolia is the base of milk-powder production in China. Moreover, almost every Chinese milk brand can be easily found in the county where we lived.

I asked him why he was going as far as Guangzhou merely to buy milk powder, and his answer really shocked me. He said no one dares to use domestic milk powder anymore. At that time, I thought he was overreacting. The situation could not be as bad as what he said.

After going back to Guangzhou, when I mentioned this to my friends, almost all my friends said my overreacting friend was normal, and I was the abnormal one. Almost none of my friends who have kids feed their children China’s domestic milk powder.

Recently the wife of one of my younger colleagues was pregnant. Today, pregnancy is not an easy thing. Upon hearing the good news, we, as colleagues, were all happy for him and congratulated him. But do you know what this younger colleague has been busy with? He has been trying to purchase foreign milk powder via the Internet in any way he can.

Don’t you think it’s very strange that someone living in a big metropolis like Guangzhou tries to buy foreign milk powder online? In recent years, when going abroad, even to Hong Kong, my colleagues and friends would always bring some milk powder back.

Due to panic buying, Hong Kong, the United Kingdom, and New Zealand have set limits on milk powder purchases by Chinese. Hong Kong even passed a new law for this.

In a commercial society, businessmen usually worry that there is nobody or very few people who will buy the product, but because of Chinese people’s panic buying, now the world has turned into worrying that the customer will buy too much. Do you feel this is funny or sad?

What does this tell us? It shows that such a large country as China, a country that proclaims itself superior, can’t even produce a can of quality milk powder.

More importantly, milk powder is not a trivial matter. Seen in a holistic way, it’s a matter that could affect the survival of all Chinese.

From the standpoint of technology, the techniques for making milk powder are very basic. A small workshop near my home can make it. China can make the Shenzhou VI and the Shenzhou VII fly in space. We can send a spaceship to the moon, but making a can of milk that is trustworthy might be difficult for China.

Why is that? Because making milk is a very large and systematic operation that requires strong quality assurance.

This is not something that the milk manufacturers like Yili or Mengniu can achieve with a little effort. With the current Chinese management system or management mechanism, it’s very difficult to ensure that things don’t go wrong during the entire process.

For example, if the milk seller doesn’t mix in additives or add in a harmful substance like melamine, is it safe then? Not quite. The grasslands the cows feed on might be polluted, and the soil and grass might contain harmful substances. When the cows eat such grass, the milk they produce would then be tainted.

Under these conditions, how can you tell a domestic China milk producer like Yili and Mengniu to produce the same level of milk as New Zealand or Australia?

Under these conditions, the fertilizers and other additives being used are poisoning powerless citizens. Even if all this stuff is not added, but the soil the crops and vegetables are grown in is poisonous, how can ordinary people avoid eating tainted food?

According to rumors, the Chinese state conducted a large-scale, detailed research project into pollution in mainland China—a very detailed census. The research results later became a state secret, not allowed to be revealed to the public.

If areas are polluted, shouldn’t this be told to the people so the citizens can take preventative measures? But this information is now considered a state secret.

In this situation, China can’t even make a can of trustworthy milk powder and can’t manage its own pollution. Everyone in the country is almost committing slow suicide. In such a country, how can one even talk about dominating the world?