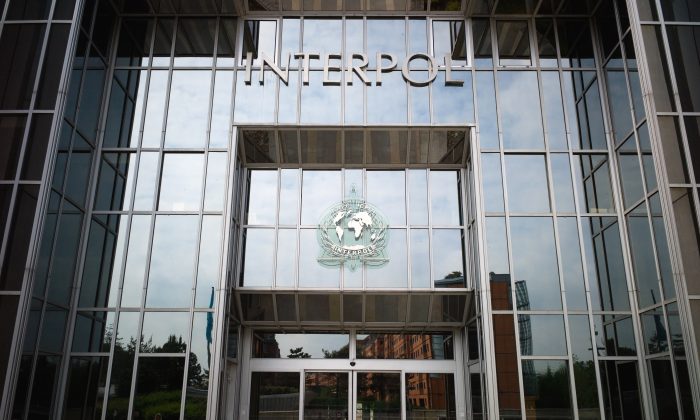 The entrance of the world's largest international police organization Interpol headquarters in Lyon, eastern France, on May 6, 2010. (Jean-Philippe Ksiazek/AFP/Getty Images)
Thinking About China

China Seeks Its Way Back to Interpol

China seeks to have a member of its Ministry of Public Security (MPS) installed on Interpol’s powerful Executive Committee at elections later this month.

On Nov. 15, a long list of members of the Inter-Parliamentary Alliance on China (IPAC), a global alliance of members of parliaments from over 20 countries, and Safeguard Defenders, a non-governmental organization (NGO) that I founded, revealed that China has successfully put forth Hu Binchen for election to Interpol’s powerful 13-member Executive Committee.

It was not long ago that the disgraced former chairman of Interpol, Meng Hongwei, a vice-minister at the MPS and a Chinese Communist Party member, had his chairmanship cut short as he disappeared during a trip back to China from France in late 2018. Meng disappeared for about half a year—into China’s “liuzhi” system for enforced disappearances outside the legal system itself—and Beijing initially refused to inform Interpol of the incident. Meng was detained in a secret location until he appeared in court and was sentenced to prison over corruption charges—likely another casualty of Chinese leader Xi Jinping’s purge of political opponents. But Meng’s situation has not stopped China from trying to regain a foothold in Interpol.

Unlike the chairmanship, which is largely ceremonial and a matter of prestige, the Executive Committee plays a key role in the actual running of the organization.

Hu is especially unsuitable for an oversight position at Interpol, even for a police officer with China’s MPS. Hu serves as the deputy director general at the ministry’s International Cooperation Department, and could also be involved in China’s Fox Hunt campaign.

Fox Hunt is run by the MPS, and seeks to have alleged fugitives returned to China, not all of whom are actual criminals, but rather political opponents and dissidents. Reports, media stories, government statements, and court documents show a campaign that not only targets victims’ families back in China via threats, intimidation, and even arrest (unless the target returns to China “voluntarily”), but which also sends covert agents to other countries to intimidate and harass Beijing’s targets—in clear violation of other countries’ sovereignty.

Now members of IPAC, as well as nearly 40 exiled lawmakers, NGO leaders, and dissidents from China, Hong Kong, Tibet, and Xinjiang, are calling on democracies to coordinate their actions at the upcoming 89th General Assembly of Interpol, which will be held from Nov. 23 to Nov. 25 in Istanbul, Turkey.

It is imperative that steps are taken to protect Interpol from falling into the hands of authoritarian and totalitarian states. Many of the activists, who are calling on member states to ensure China does not regain a foothold in Interpol, are themselves at significant risk of being extradited back to China due to the misuse of the organization’s red notices (or alert system).

It is hard to gauge the extent to which the Chinese regime has used Interpol for its own benefit and to carry out abuses. To remedy that, Safeguard Defenders has just released a study, which sheds some clarity on this underreported issue. The report presents information about the dramatic change in how China has used Interpol before and after Xi came to power.

It remains to be seen if China will arrive at the General Assembly with a “large sack of gold” to buy its way into Interpol, as critics claimed it did in 2016 with the election of Meng Hongwei, or if democratic nations will work together to protect Interpol from being overrun by authoritarians.