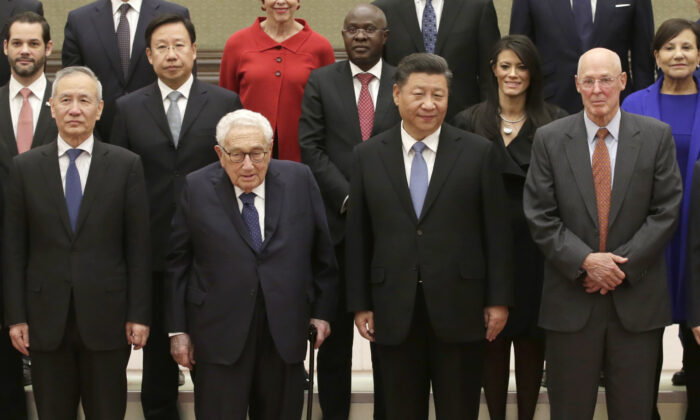 (R-L) Former U.S. Treasury Secretary Henry Paulson, Chinese leader Xi Jinping, former U.S. Secretary of State Henry Kissinger, and Chinese Vice Premier Liu He and members of a delegation from the 2019 New Economy Forum pose for a photo before a meeting at the Great Hall of the People in Beijing on Nov. 22, 2019. (Jason Lee/Pool/AFP via Getty Images)
US-China Relations

China’s communist regime is seeking to influence the United States policies and advance its interests through American lobbyists, according to Robby Stephany Smith, national security adviser for Coalition for a Prosperous America.

“There are certain actors who are incentivized by the Chinese Communist Party (CCP) through different forms of different programs, to advocate for their policies and their companies and linkages to them, and to be sure that they’re promoting CCP ideology,” Smith recently told NTD, an affiliate of Epoch TV.

Playing Out at All Levels

These types of lobbying operations are happening at every level, including local communities, local chambers of commerce, the state level, and also the federal level, Smith said.

“Whenever these big bills are moving on the Capitol Hill, whether it’s the China competition bill that may or may not be moving forward any longer, or the annual defense bill, you have lobbyists taking up the side of Chinese companies,” she said.

She pointed to China’s Da-Jiang Innovations (DJI) drone manufacturer, saying the company has lobbying firms working on its behalf.

According to data by market researcher Drone Industry Insights, DJI had a U.S. market share of close to 77 percent as of October 2019, followed by U.S. tech giant Intel with 3.7 percent.

“You have groups … that are going out there and trying to be sure that there are protections in place to be sure that America isn’t investing in unmanned aerial systems that could be compromised,” Smith said.

Wall Street has also been involved in these lobbying activities, Smith pointed out.

According to Smith, investment and advisory groups including BlackRock and others have worked “to increase western exposure to Beijing and to pour United States pensions, retirement, and investment funds into the Chinese economy, she said, “oftentimes, without taking any consideration for national security factors, geopolitical risk, or even what America’s best interests are.”

To counter the threats imposed by the Chinese regime, Smith suggested actions taken on multiple levels.

She called for the U.S. Congress to require greater transparency among the intel communities and the executive branch in relation to “foreign registration, contributions to think tanks, contributions to universities, certain entities, and … broader lobbying that happens in Washington.”

“But ultimately, I think it’s going to come down to protecting and being involved in local communities and community organizations, whether it’s chambers of commerce or rotary clubs, to know exactly who’s involved in your community, and why,” Smith said.

As for businesses, she urged “corporate leaders to be scrutinized with their employment, to report things to the authorities whenever something looks wrong, and to be sure that we’re protecting our trade secrets and beyond.”