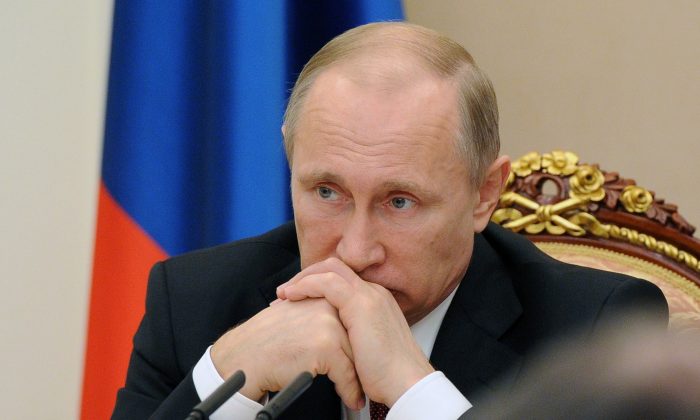 US Weekly cited an unnamed insider on March 31 saying the two are in a serious relationship. It also claims rumors of their relationship have been floating around for at least a couple years.

How to Know If Your Android Phone Is Spying on You

While Deng has been accused of being a Chinese spy, there’s no solid evidence that she is acting on behalf of the Chinese regime. She does, however, seem to fancy men in places of power.

Rumors of her alleged role as a Chinese spy were the backdrop to her 2013 divorce with Murdoch, along with rumors she was having an affair with former British Prime Minister Tony Blair.

Australian businessman Clive Palmer claimed in September 2013 that “Wendi Deng is a Chinese spy and that’s why Rupert got rid of her.” He made the claims while also claiming he would sue Murdoch over an unfavorable article on his finances, which had been published in a Murdoch-owned newspaper, The Australian.

“You know Rupert Murdoch’s wife Wendi Deng is a Chinese spy and that’s been right across the world,” Palmer said, according to the Daily Mail.

“She’s been spying on Rupert for years, giving money back to Chinese intelligence,” he said.

Deng was allegedly introduced to Murdoch through a wine spilling “accident” at a cocktail party. There were rumors that her eventual marriage with Murdoch had to do with the Chinese Communist Party’s (CCP) desire to influence news coverage in overseas news outlets.

Chinese state media did little to quell suspicions of Deng’s past. Soon after Murdoch filed for divorce in June 2013, the state-run news outlet People’s Daily published an article titled, “Murdoch’s reason for divorce: Getting rid of Deng’s control over News Corp.”

Vision Times reported that under the terms for divorce, Deng wasn’t given any assets in Murdoch’s News Corp. It also notes that while Murdoch’s four adult children will inherit voting shares through Murdoch’s trust fund, his two daughters with Deng will get a non-voting fund (still worth $8.7 million).

It’s not an uncommon tactic for spy agencies to use sexual relationships, sometimes called “sexpionage,” as a method for spying—and this isn’t limited to Chinese spy agencies. It’s a method to compromise a targeted individual, often referred to as a “honey trap.”

“In America, in the West, occasionally you ask your men to stand up for their country. There’s very little difference. In Russia, we just ask our young women to lay down,” Kalugin said, according to the Chicago Tribune.

Of course, the tactic doesn’t just use women. Spy agencies have used men for sexpionage just the same.

There were many documented cases of the tactic being used throughout the Cold War, but even recently there have been plenty of cases.

An alleged Chinese spy operation was also uncovered in Japan in October 2013 operating out of a Kyoto hostess club. According to The Tokyo Reporter, the club was frequented by Japanese businessmen, and many of them revealed technologies and strategies for the Chinese market with the women employed there.

The Reporter states that the female manager was a Chinese national with alleged relatives in high-ranking positions in the CCP. A 32-year-old hostess working there and a 52-year-old Japan Self-Defense Force member were also arrested and found guilty for having a fake marriage.

In September 2014, a 60-year-old U.S. defense contractor in Hawaii, Benjamin Pierce Bishop, was sentenced to seven years in prison for passing top-secret government documents to his 27-year-old girlfriend, who was a Chinese national.

Information Bishop gave her included plans for the deployment of U.S. strategic nuclear systems and early warning radars, and other defense secrets, according to Reuters.

The process of finding people to exploit has been made even easier with social media, chat rooms, and other websites. Jody Westby, CEO of security company Global Cyber Risk explained some of its current uses in a previous interview with Epoch Times.

Westby said that if a spy was targeting a business, for example, they would just search the company’s name on sites like LinkedIn and Facebook, which would give them a map of the company’s employees.

After they map the company, they’ll start looking at the different profiles of its employees, searching for someone who has a trait that can be exploited—maybe they’re unhappy with their job, or they need money, or they’re involved in a bad relationship.

Individuals who are identified as having the “vulnerability” of lust are the typical targets for honey traps—but it can also be someone who is in a bad relationship, or who is looking for a relationship.