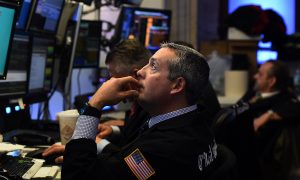 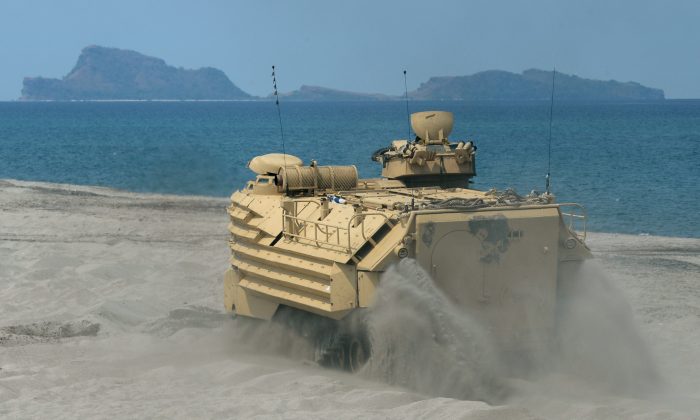 A U.S. Marine amphibious assault vehicle overlooks the water in San Antonio in Zambales province on April 21, 2015, during a military training with the Philippines 137 miles east of the Scarborough Shoal in the South China Sea. Tensions over the South China Sea are reaching a new level. (Ted Aljibe/AFP/Getty Images)
China

While news that China deployed anti-aircraft missiles in the South China Sea made headlines over the past week, the missiles are just part of a broader shift that will likely take the conflict to a new level.

The changes began on Jan. 30, when the USS Curtis Wilbur, a destroyer with the U.S. Navy, passed within 12 nautical miles of Triton Island in the Paracel Island chain in the South China Sea.

It was part of a “freedom of navigation” mission, and was supported by Taiwan and Vietnam, which both lay claim to Triton Island. China, on the other hand, which also claims the island, was not happy.

State-run news sources within China began trumpeting news about U.S. aggression, and claims that the United States was trying to establish “hegemony” in the South China Sea.

I explained the irony of the Chinese narrative in a previous piece—noting that the situation is the opposite. China is literally trying to establish hegemony over the region, while the United States is trying to maintain standards of free transit through waters that are critical to international trade.

Yet, regardless of intentions, the Chinese regime called for a heightened military response against the United States and its allies—and this may bring tensions in the South China Sea to a boiling point.

The Chinese regime claimed the missiles had been there for years, but if this was true, the Chinese military had kept the missiles hidden. Satellite images show the missiles were brought out sometime between Feb. 3 and Feb. 14. Previous reports say China began weaponizing its man-made islands around May 2015.

While the missiles took center-stage in global reporting, however, there were several other developments of similar weight.

While the missiles took center-stage in global reporting, however, there were several other developments of similar weight.

China may be building a new helicopter base for anti-submarine warfare (ASW), according to a report from USNI News, a news source of the U.S. Naval Institute. Defense analysts have previously noted that submarines would be a game-changer for the United States, if there were a war with China.

The new anti-submarine base “could signal a step-up in China’s ASW capabilities across the South China Sea,” states a report from Victor Robert Lee of The Diplomat.

“A network of helicopter bases and refueling stops scattered across the South China Sea, using no more than the bases China is already known to be building, would make almost any coordinate in the sea reachable,” Lee states.

People’s Daily, one of the main mouthpieces of the Chinese regime, then followed with a commentary saying China must “teach the United States a lesson” if the United States continues its freedom of navigation operations in the South China Sea.

Chinese news outlets are now reporting that the Chinese regime may deploy anti-ship missiles, and other weapons in the South China Sea.

Facing the rise in tensions with China, the United States is now looking to expand a key naval protocol for safety of ships meeting at sea, called the Code for Unplanned Encounters at Sea.

The proposed changes would edit rules to cover non-military ships. It was outlined by Vice Admiral Joseph Aucoin, the commander of the Japan-based U.S. Seventh Fleet, according to The Diplomat.

One of the key reasons for the considered changes, according to The Diplomat, is that the Chinese regime is deploying new, large coast guard ships “painted white rather than Navy grey.” China has been using coast guard and fishing boats as part of its military strategy in the region.

Other nations are also upping their game to challenge China’s claims. The United States is urging Australia to begin its own freedom of navigation operations, Vietnam is building up its military, troops in the Philippines are preparing for the “worst-case” scenario of a dispute with China, and Japan is considering starting its own naval patrols.

The question now is how hard is China willing to push back, and how will other nations undo China’s actions to build military structures in its push to control transit in the region.