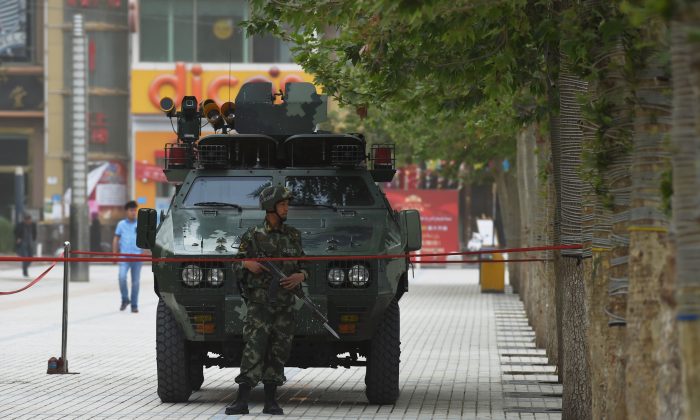 The undated photo shows a member of the Chinese paramilitary police in front of an armored vehicle in Hotan, Xinjiang region of China. The Chinese regime has deepened its suppression of the Uyghur ethnic group in the region. (Greg Baker/AFP/Getty Images)
China

The Chinese regime wasted no time after the Nov. 13 terrorist attacks in Paris to call on the world to support its own brand of “counterterrorism” by helping it suppress the Uyghur minority group in Xinjiang, also known as East Turkestan.

The Chinese regime is stepping up its suppression of the region, mainly for business. Its new “Silk Road Economic Belt” that will build a trade route into Europe will pass through the region.

After the Paris attacks, Xinhua, the official state mouthpiece, quoted Chinese diplomat Wang Yi saying “China is also a victim of terrorism,” and that “Cracking down on the ‘East Turkestan’ terrorist forces” should become “an important component of international counterterrorism.”

While his statements went largely ignored in political circles, where the Chinese Communist Party’s (CCP) abuses of Uyghurs are generally known, some news outlets got caught in the stream of propaganda that has followed.

The most glaring example is a feature in TIME about the “Men and Women Who Fight China’s Shadowy ‘Anti-Terrorist’ War.” The odd piece says that after the Paris attacks, members of the CCP’s special forces spoke with TIME and started writing on social media about “their own battles.”

TIME goes over many of the questionable “terrorist attacks” China has faced, and while the piece notes some of the uncertainties around some of the incidents, it still comes off as a promotional piece for human rights abuse.

It shares the same news element as an official Xinhua piece, saying that police in Xinjiang arrested a group of 28 alleged terrorists they say killed 11 people at a coal mine. It seems to be part of a larger propaganda push, which has seen glamour shots of “anti-terror” Chinese soldiers and police forces posing together.

The TIME carries this same element with many heroic-sounding quotes from people carrying out the CCP’s harsh suppression in Xinjiang. Among them is a self-proclaimed member of the Chinese “anti-terror” police force who wrote on social media he’s fighting “Religious radicals and separatists are trying to alienate the Uighur from the Han people.”

He also claims “Some foreign forces, such as the Turkish and American democracy foundations, are also supporting the radicals and separatists.”

While the information may sound convincing on its face, a bit of research shows what’s behind these statements.

The CCP has what it calls the “three evils” of extremism, separatism, and terrorism. While fighting terrorism may sound fine to us in the West, in China its implications are much different. The main push in the CCP’s campaign isn’t to fight terrorism. Instead, it’s designed to stop terrorist elements from taking root in Xinjiang.

The “three evils” phrase brands a desire for cultural independence as “separatism” and calls any forms of resistance “extremism” and “terrorism.” Western leaders have broadly not acknowledged incidents involving Uyghurs as terrorist attacks.

According to the 2015 annual report from the U.S.-China Economic and Security Review Commission, the CCP’s campaign against the “three evils” has “manifested in a heavy-handed security apparatus and led to the adoption of a repressive approach to Islam in Xinjiang.”

“As in Tibet, many residents of Xinjiang do not culturally or politically identify with China, and some Uyghur groups advocate for greater autonomy or full independence for Xinjiang,” it states, noting that the CCP “views the existence of these groups as a threat to China’s sovereignty and security.”

Xinjiang is home to 21.8 million people and 13 major ethnic groups, according to the report. An estimated 46 percent of them are Uyghurs, and the Sunni Islam is the main religion.

The CCP has used a “multi-tiered system of surveillance, control, and suppression of religious activity aimed at Xinjiang’s Uyghurs,” according to Human Rights Watch.

“At its most extreme, peaceful activists who practice their religion in a manner deemed unacceptable by state authorities or CCP officials are arrested, tortured, and at times executed,” it states, adding that on the routine level, “many Uyghurs experience harassment in their daily lives.”

“The Chinese government has instituted controls over who can be a cleric, what version of the Koran may be used, where religious gatherings may be held, and what may be said on religious occasions,” it states.

In recent years, the CCP has also banned long beards and Islamic veils. It has also prohibited Muslims from celebrating Ramadan, and at one point even organized a beer festival in a Muslim town—since Muslims aren’t supposed to drink alcohol.

The CCP’s harsh suppression of the region has likewise led to several protests and riots. The most visible was in the Xinjiang capital of Urumqi in 2009. Chinese police responded to the riots using live ammunition. CCP sources claim 197 people were killed, while World Uyghur Congress says the death toll was closer to 600.

There were similar riots in 2013 and 2014. The congressional report states, “China invariably refers to such incidents as acts of terrorism. Some undoubtedly are, but in many cases it is nearly impossible for outsiders to assess the veracity of the Chinese government’s accounts of ‘terrorist’ incidents, which likely exaggerate the ‘three evils’ threat to justify crackdowns. “

The report cites Andrew Small, transatlantic fellow at the German Marshall Fund of the United States, giving his take on “terrorism” in Xinjiang.

Small says the CCP has the “tendency to attribute almost any act of violence in Xinjiang to ‘separatists,’ to claim malevolent intent behind even the most peaceful of protests, and to criminalize political groups.”

He said this “leaves the line between the terrorist, the activist, and the aggrieved citizenry permanently blurred.”