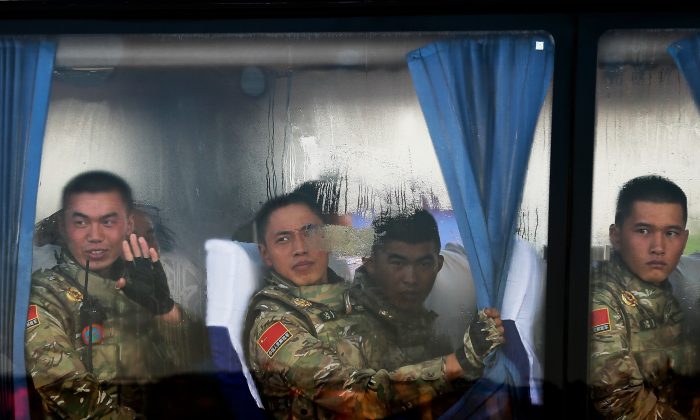 Chinese People's Liberation Army troops look out from a bus as they arrive at Tiananmen Gate in Beijing on Sept. 3. The Chinese regime is planning to restructure its military, and control of its hacker units may be shifted. (Andy Wong/Getty Images)
China

Rumor has it the Chinese regime will move its cyberwarfare units under a single command structure. Unnamed sources told Bloomberg in mid-October that Chinese cyberunits from all departments would be moved under a centralized command under the Central Military Commission.

Changes were allegedly discussed during the Chinese Communist Party’s (CCP) Fifth Plenum, attended by more than 350 top CCP officials, where they lay out the new five-year economic plan.

Bloomberg followed with some interesting analysis, but in my opinion, it missed the mark. First of all, the Chinese regime already has a command structure for its cyberdepartments, which on the surface—and under proposed changes—is headed by the Central Military Commission. Second, proposals for the new Chinese military structure give a much more complex picture of how its cyberunits will be managed.

As things stand now, the CCP’s cyberunits are broken into three tiers. The structure, which is already under the Central Military Commission, was detailed in the latest edition of The Science of Military Strategy, published by the top research institute of the People’s Liberation Army (PLA). While the document was released in 2013, details on the cyberstructure were only reported in the West in March this year.

At the top of the cyberstructure are the specialized PLA military units assigned to attack and defend networks. Next are the specialists in civilian organizations—including the the Ministry of State Security and the Ministry of Public Security—that are “authorized by the military to carry out network warfare operations.” The third tier are groups outside the regime, which presumably include nationalistic hackers (often known as “Patriot Hackers”), that can be called on for cyberoperations when needed.

The Central Military Commission is technically in charge of these units, but when it comes to actual power within the PLA, things aren’t that simple.

According to the surface structure, the Central Military Commission heads the General Staff Department, which in turn heads the hacker units under its Third Department. In an investigative report in September, however, Epoch Times revealed that the real power behind the PLA hackers is the 61 Research Department of the Third Department.

The 61 Research Institute is led by Maj. Gen. Wang Jianxin, son of Wang Zheng who pioneered the CCP’s signals intelligence operations under Mao Zedong. Sources told the Epoch Times that while Wang’s department is several tiers below the Central Military Commission, he’s an extremely powerful man.

This is where the new structure comes into play. It ties into plans to restructure the entire PLA, and cut 300,000 troops, announced by CCP leader Xi Jinping in early September.

Shortly after the announcement, South China Morning Post—which has been growing increasingly close to the Chinese regime—released an infographic showing a proposal for the new structure.

Under the current system, most of the military is controlled by the Central Military Commission, with some power shared with the State Council through its joint influence over the Ministry of National Defense.

With the new structure, however, a large chunk of military units would be placed under the Ministry of National Defense—which means the State Council would have more of a hand in their operations.

The State Council is technically the government of China, but it’s still controlled by the CCP.

Meanwhile, the unit in charge of the hackers—the General Staff Department—would be given command over three other departments: General Political Department, General Logistics Department, and the General Armaments Department.

Keep in mind, these are still just proposals. But it appears the changes aren’t meant to consolidate command of the CCP’s hackers. Instead, it looks like the changes are designed to rein in the hackers by giving the State Council some indirect sway over their actions. Several sources have told the Epoch Times that the Chinese regime has trouble controlling finances tied to military hackers, and this has caused forms of corruption that the leadership wishes to stem.

The new system would give the State Council—the highest executive agency in the Chinese state (though of course below the Politburo Standing Committee)—more oversight. This puts the infrastructure for economic theft under the Ministry of Defense, while giving more government oversight over the activities, thus depriving the PLA of some of its autonomy.