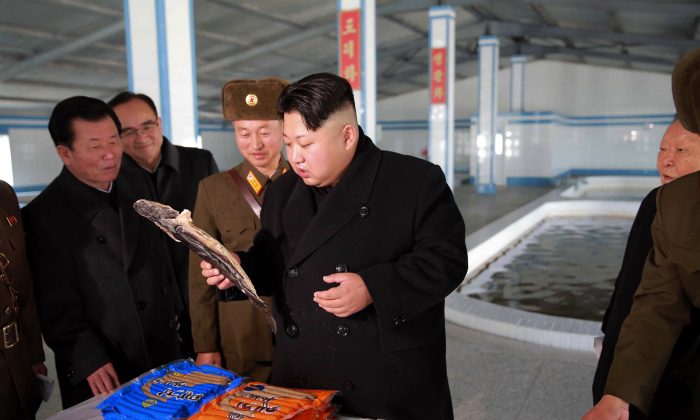 The Chinese regime’s mad creation to its east may have finally turned on its master, and it appears that Chinese leaders aren’t ready to accept the fact.

North Korea’s all-girl Moranbong Band was set to hold three invitation-only “friendship performances” in Beijing, starting Dec. 12. Yet, on the afternoon before the performances, the group went to the Beijing airport where they caught the first flight back to Pyongyang.

North Korea’s actions were allegedly in response to a small Chinese delegation, which was sent to protest a recent claim from North Korean leader Kim Jong Un that he now has a hydrogen bomb.

The Chinese Communist Party’s (CCP) Foreign Ministry didn’t seem to take offense—as they likely would have if any other nation pulled such a move. According to Reuters, its spokesman, Hong Lei, said the CCP still wants cultural exchanges with North Korea, and the shows were cancelled due to “communication issues at the working level.”

One of the CCP’s mouthpiece newspapers, the Global Times, published a similar claim, saying the cancellation was a “glitch” that wouldn’t have any long-term effects on the CCP’s ties to North Korea.

The “glitch,” however, was just one of many that has taken place recently in the CCP’s relations with North Korea. And in all cases, the CCP’s response has shown a level of muted restraint you’d be hard-pressed to find it showing anywhere else.

North Korea has been on a witch-hunt for Chinese spies. By October, the North Korean National Security Department had allegedly arrested, imprisoned, or executed more than a hundred Chinese nationals.

Some of the Chinese nationals were accused of being spies. Others were accused of illegally spreading videos, supporting “defectors,” working as money carriers, or holding religious activities.

The campaign didn’t end in October, either. DailyNK, a Seoul-based news source on North Korea, reported on Dec. 14 that even the Chinese ambassador to North Korea has been placed under investigation and is being monitored.

North Korea’s campaign against Chinese nationals, it reports, are part of an “emergency investigation” in every part of the country.

An unnamed source in North Korea told DailyNK that the campaign may be the Kim regime’s way of striking out at the CCP for getting too close to South Korea.

“Some Party cadres have even speculated that this move will spell the beginning of the end for Sino-North Korean relations,” it states.

The response from the Chinese regime has been uncharacteristically mild—at least when you consider how it would react if any other nation were to lash out against the CCP in such a manner.

Yet, the CCP’s mild response isn’t without reason. North Korea’s dictatorship is a product of Chinese intervention in the Korean War, and to this day the North Korean communist regime is sustained almost entirely by support from the CCP.

According to the Council on Foreign Relations, the CCP is North Korea’s main source of food, weapons, and energy. It states the CCP has helped sustain the regime by opposing “harsh international sanctions on North Korea in the hope of avoiding regime collapse and a refugee influx across their border.”

The CCP doesn’t support North Korea out of some benign sense of kinship, either. If that were the case, you’d likely see the CCP giving similar support and tolerance for its much-less-crazed communist neighbor in Vietnam.

Rather, it uses North Korea as a political tool—valuable inside China for propaganda, and valuable outside China as a tool for diplomacy.

In China, the CCP uses North Korea as a sort of reminder of the past—a preserved image of what China was like in the days of Mao. It reminds the Chinese that things could be worse.

Outside of China, North Korea serves other uses.

When North Korea makes its occasional threat of nuclear holocaust on South Korea, Japan, or elsewhere, the CCP can then approach these countries to help as an intermediary. This in turn, helps the CCP with diplomacy—particularly with South Korea.

Yet, it seems that under the hermit regime—where the drug methamphetamine is “offered as casually as a cup of tea,” according to Los Angeles Times—the air of paranoia is finally taking its toll.

And just like a drug dealer trapped in the same room with a junkie going through a psychotic episode, the Chinese regime has found itself the target in this latest bout of madness from the very thing it helped create.