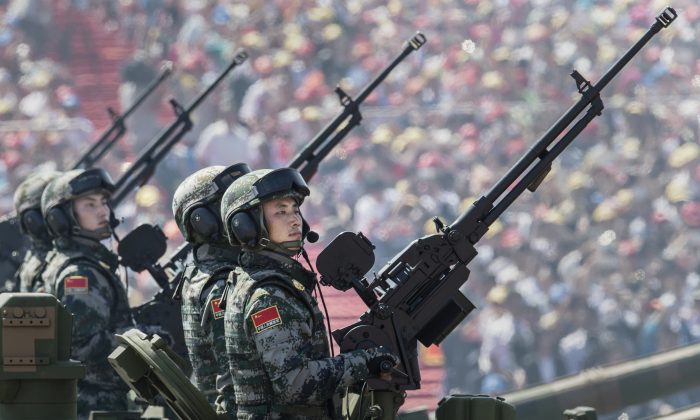 Chinese soldiers ride in an armoured vehicle as they hold machine guns while passing in front of Tiananmen Square and the Forbidden City during a military parade on September 3, 2015 in Beijing, China. (Kevin Frayer/Getty Images)
China

It’s possible a real-world nuclear war could end without a single missile being fired, and the United States could find itself on the losing end.

I’ve covered the problem before. The United States has barely moved its nuclear launch sites since the Cold War, and according to Richard Fisher, senior fellow at the International Assessment and Strategy Center, all of these sites are overtargeted by Russian and Chinese intercontinental ballistic missiles (ICBMs).

The difference today is that while you can literally find most U.S. nuclear weapons sites using Google Earth—and while Russia and the United States are disposing of warheads—the Chinese regime is making significant efforts to build its nuclear arsenals, and to keep these weapons hidden.

On Dec. 5, 2015, the Chinese regime tested a launcher on its new rail-mobile DF-41 ICBM by ejecting the missile from its launch tube, but without igniting its engine. According to IHS Jane’s, it was “likely meant to test the tube launch system’s compatibility with its new rail car.”

The DF-41, officially called the Dongfeng-41 (“East Wind-41”), is a road-mobile ICBM that can carry 10 nuclear warheads. It can also allegedly hit targets between 7,400 and 9,000 miles away—enough to strike New York from Beijing.

What’s most interesting about the latest test, however, has less to do with the missile and more to do with the carrier. IHS Jane’s reported that it “confirms previous reports of China’s interest in rail mobility to increase the survivability of its ICBM force.”

It may have obtained the designs from Ukraine. IHS Jane’s notes a 2013 report from the Georgetown University Arms Control Project that says the Chinese regime obtained “ICBM rail car insights from Ukraine,” where the Soviets and Russia built their rail-mobile ICBM, the RT-23 (SS-24 Scalpel).

The mobile capabilities of the ICBMs are what should have the U.S. defense community worried. The idea of mobile launchers isn’t to find fancy ways to launch rockets, but instead to find ways to keep them hidden and always moving.

Previous versions of the DF-41 were carried by an 18-wheel transporter-erector-launcher. On Feb. 19, 2015, the People’s Liberation Army Pictorial, a Chinese military magazine, published an image of a 16-wheel launch truck allegedly for its DF-31B ICMB.

The new launcher is yet another example of the intentionally opaque nature of the Chinese Communist Party’s (CCP) nuclear weapons arsenal. While the United States has chosen to open its systems to the prying eyes of the world, the CCP knows that revealing the locations of nuclear warheads means telling your adversaries where to strike first.

Of course, the United States used to know this also. In the 1980s, the United States successfully developed ICBMs small enough to be transported and launched from a vehicle, under its Midgetman program. The idea behind Midgetman was to prevent U.S. adversaries from knowing the locations of its nuclear weapons, with an understanding that these sites would be the main targets in the event of nuclear war.

The Midgetman program was scrapped, however, in 1992 shortly after the Cold War came to an end.

But while the Cold War between the Soviets and the United States is now just history, many of the same threats still stand with Communist China.

“If you look at new Chinese bases, it is quite easy to conclude that China is building up to the capability to pre-emptively strike our ICMB fields,” Fisher said, in a previous interview with the Epoch Times.

He said, “We are on the road toward a near-term scenario in which we will be vulnerable to strategic blackmail.”