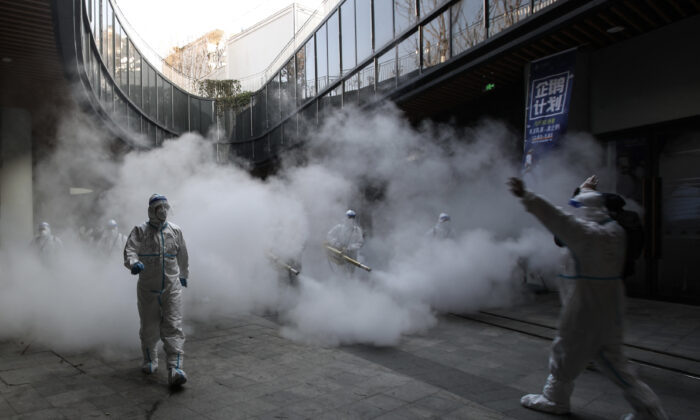 Chinese authorities sealed residents’ homes in the city of Xi’an on Jan. 8 because of a COVID-19 outbreak, but didn’t arrange for a reliable food supply, residents say. Now, after being locked down for almost three weeks, they’re lacking in food and are on the edge of mental breakdown.

The Chinese regime has claimed that the outbreak in Xi’an has been under control since Jan. 5. However, the regime has upgraded some of its control measures, although some Xi’an residents still weren’t able to leave their homes as of Jan. 11.

“I had never been diagnosed with COVID-19. Why did they seal my door?” Cai Jiaying (a pseudonym), a resident of the Rongshang Compound, Changyanbao Community, Yanta District in Xi’an, told the Chinese edition of The Epoch Times on Jan. 9. “Our residential compound has been locked down for 21 days. … In the beginning [of the lockdown], I consoled myself. I was disappointed days later and then felt hopeless and despair.”

Cai said she and her husband had bought only a little food in the past three weeks, and they didn’t know when they would be able to buy more.

“I’m worried that we won’t have anything to eat soon. We don’t dare to fill our stomachs,” she said. “We go to bed after a meal around 3 to 4 p.m. every afternoon.”

The family only had a small bowl of rice, 11 pounds of wheat flour, seven cups of instant noodles, one bamboo shoot, and a little bit of meat at their home, according to Cai.

“The food can feed us for at most one week,” she said.

Other Xi’an residents described similar situations to the Chinese edition of The Epoch Times.

On Jan. 11, Xi’an authorities announced that nine communities in the city were downgraded to low-risk regions, where people have few chances to come into contact with those infected with COVID-19, while 44 others were still considered to be high-risk or medium-risk regions.

The regime didn’t mention how many communities there are in the city, nor did it provide details of the lockdown policies in different risk areas.

On Jan. 4, local authorities announced another standard to divide the city into three categories: “closed zones,” “controlled zones,” and “prevention zones.” In general, residents in closed zones aren’t allowed to leave their homes no matter how healthy they are or how urgent their need to go out is.

The regime said zones could be downgraded if no resident in the zone was infected with the CCP virus or had contact with those infected with COVID-19 in the past 14 days and all residents test negative for the virus within 48 hours.

The CCP (Chinese Communist Party) virus, commonly known as novel coronavirus, is the pathogen that causes the disease COVID-19.

Whether locked down at home or in a dorm, Xi’an residents are suffering.

“We only have a few cabbage leaves at home,” Xu Qianru (a pseudonym), a resident of the Changyanbao Community, told the Chinese edition of The Epoch Times on Jan. 9. “We kept calling the residential compound’s management company, but nobody answered the phone.”

Xu’s apartment was sealed by the management company on the evening of Jan. 8. She learned from her neighbors that all of the apartments in the compound had been sealed.

“Several thousand families in our compound are sealed at home like us. … Our lives are really difficult,” she said.

“We had eaten all our stock, and we can’t buy anything. Do you want the over 10,000 residents to die of starvation?” Yang Hai, a resident of Hengdacheng at Dazhai Road, Yanta District, complained in a video posted on social media platforms on Jan. 8.

“Do you treat us, the people, like animals?” Yang said. “We can’t receive any [food] after the doors are sealed.”

College students in Xi’an have been locked down in their dorms since late December 2021, and they aren’t allowed to leave the building, let alone go home, even though some of their homes are in the city.

“We have six people sharing one room. … We stay in our twin-over-twin bunk beds for most of the time during the day,” Fu Hua (a pseudonym) told the Chinese edition of The Epoch Times on Jan. 8. “We study different majors and have different class schedules. We take online classes at the dorm, and we can’t avoid interfering with each other.”

Fu said she feels frustrated about the lockdown. She would even prefer to be sent to a quarantine center for 14 days if the regime would allow her to go home afterward, she said.