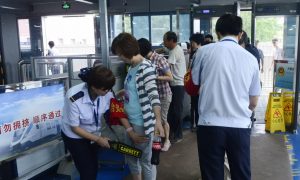 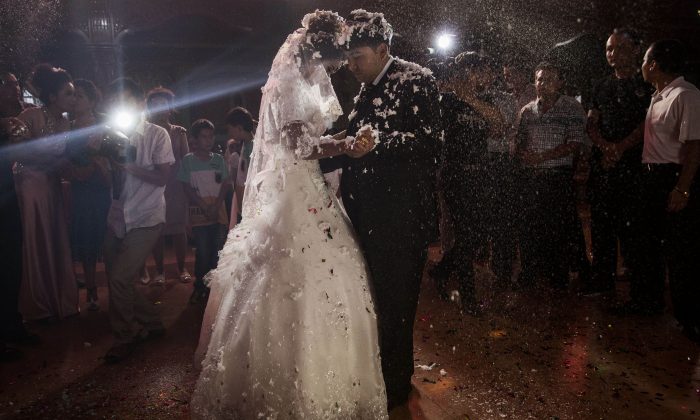 A Uyghur couple enjoy their first dance together at their wedding celebration after being married on Aug. 2, 2014, in Kashgar, Xinjiang Uyghur Autonomous Region. A new policy was announced in Xinjiang to give cash and other financial benefits for marriages between the dominant Han Chinese people and minority ethnicities. (Kevin Frayer/Getty Images)
China

China Regime Says ‘We Are the Borg’ to Ethnic Minorities

A local Chinese Communist Party official in the farflung, restive province of Xinjiang, seems to be taking a leaf from Star Trek.

The science-fiction series includes a race called The Borg, who assimilate all they encounter. The famous lines go: “We are the Borg. Lower your shields and surrender your ships. We will add your biological and technological distinctiveness to our own. Your culture will adapt to service us. Resistance is futile.”

The Chinese regime seems to have made a similar offer to Uyghur muslims, the dominant Turkic-speaking people in far western Xinjiang. The Party restricts ethnic dress, men’s beards, women’s veils, abstention from pork, and local cadres even go to comic lengths to try to stop Uyghurs from fasting during Ramadan, the muslim festival.

Yasen Nasi’er, deputy secretary of the Communist Party Committee in Cherche County, has suggested that couples composed of Han Chinese and ethnic minorities will get a range of financial incentives, including straight out cash payments, plus housing and medical subsidies, and benefits for their children.

The county of Cherchen began rolling out a trial in late August. Nasi’er, the Party official, said the policy was meant to be a “grand gesture for developing fusion and integration among minorities,” according to Tianshan Net, the state news media in Xinjiang.

Han are the dominant ethnicity in China, and the vast majority of Communist Party members are Han. Ethnic minorities are mostly found along China’s border areas, including in Tibet and Xinjiang—and ethnic relations in these regions are often stained by mistrust, discrimination, stereotypes, and violence.

The policy offers 10,000 yuan ($1,626) every year to newly married families who include one Han person with any member of China’s 55 minority groups. As long as they stay married, the couple is entitled to five years of cash rewards. After three years, they get additional housing and medical benefits, the policy says.

The offspring of these happy families won’t be left out, either. Children have been promised free education from kindergarten to high school, while those in secondary vocational schools will get a $500 stipend every school year. College students will receive $800 annually.

The population of Cherchen County is 100,000, 72 percent of them Uyghurs, the rest mostly Han, according to government data.

The relationship between Uyghurs and the communist authorities, who are mostly Han, has become more tense in recent years due to ongoing crackdowns on Muslim worship in the region, and due to the violent resistance of some Uyghurs, whom the regime describes as terrorists.

Local governments in Xinjiang have banned women from wearing traditional Uyghur veils and banned men from growing their beards, leading to protests and clashes this year.

Violent attacks have also taken place in Xinjiang and elsewhere, which communist authorities blame on ethnic extremists from Xinjiang. This August, the regime executed eight Uyghurs that it accused of participating in what it said was a terrorist attack on Tiananmen Square in Beijing last October.

The attack, such as it was, consisted of a jeep crashing into a fence and bursting into flames near Tiananmen Square in Beijing. Two tourists were killed, along with the three passengers—the driver, his wife, and his mother.

Predictably, as with many of the ill-conceived policies proposed regularly by Party officials, the assimilationist marriage proposal has come under strong scrutiny from the public.

“This method should really be rethought. National integration is a gradual, natural process that takes hundreds of years. Artificially intervening will seem like ‘assimilation.’ Love and marriage shouldn’t be used this way! A stupid, foolish idea!” remarked the Internet user “NY-CMP.”

“Jin Ai,” another Internet user, wrote: “Instead of using money to promote intermarriage, the government should put more effort into developing local education and medication, so that all children are able to receive education and attend college.”

Still others suggested that the plan might backfire entirely. “Tuojiangde Baicai,” who said he or she has lived in Xinjiang for over 30 years, said that in all the marriages across ethnic lines that he or she was aware of, in every case except for one couple, it was the Han partner that eventually took on the religion of the ethnic minority group.