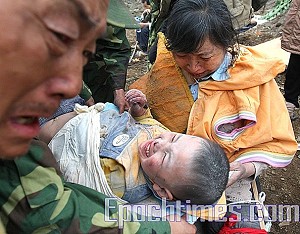 Little Langzhen's grandparents weep with relief upon seeing their grandson rescued from amidst the rubble, May 13, in Mianyang City, Beichuan County, Sichuan. (The Epoch Times)
China

YINGXIU—The death toll from China's earthquake could soar to more than 50,000, state-run media reported Thursday, as rescuers struggled to help survivors and hope faded for the thousands buried under rubble.

Some 20,000 are confirmed dead after Monday's 7.9 magnitude quake and 25,000 were buried in areas rescuers have struggled to reach, battling landslides, buckled roads and collapsed bridges.

Half the epicenter town of Yingxiu, where corpses are lined along the river, has been flattened and 90 percent of the buildings remaining look unsafe.

Zhang Yuejiao, 18, ran out of her school as it collapsed, with school buildings appearing to be the biggest victims of the tremor across Sichuan, a province as big as France.

“We have been waiting to try to find out what happened to my brother,” she said calmly. “His school collapsed and we haven't been able to find him.”

Helicopters arrived every 15 minutes to take the injured away and soldiers had walked in 40 km (24 miles) to help.

The Communist Party told officials to “ensure social stability” as the quake spawned rumors of chemical spills, fears of dam bursts and scenes of collective desperation.

Rescuers in the city of Dujiangyan wrapped corpses dragged from the rubble in tarpaulins and sped them to morgues.

They were so busy that a notice outside one collapsed school asked parents to search for missing children in shifts.

About 130,000 army and paramilitary troops assisted the search and rescue effort in Sichuan, sifting through dozens of towns turned to rubble.

But three days after the quake, hopes of pulling survivors from the ruins dimmed and the waves of rescuers appear to be hampered by lack of specialized equipment.

Still, there were moments of joy and relief. “Thank you, thank you,” one 22-year-old said after she was eventually pulled to safety, covering her face against the light in Dujiangyan. She had been trapped, unable to move, under the ruins of a hospital.

A teenage girl told Xinhua how she and her classmates sang pop songs together as they lay trapped and injured in the ruins of their high school.

Rescuers reached a 62-year-old man after an all-night search, prompting a round of applause from onlookers.

Thirty-three tourists from Britain, the United States and France were airlifted out of a panda reserve, but Xinhua said 893 foreign tourists remained trapped. One German was among the victims, the Foreign Ministry said.

But the strains from tens of thousands of homeless were growing.

“There is enough food but not enough water. We have only had bottled mineral water the past few days, nothing to cook with,” said Wang Yujie, a teacher whose school withstood the quake.

More aid was arriving and efforts at coordination were also improving, with Sichuan setting up a hotline for victims and ambulances with Beijing license plates on the roads.

More than 12.5 tonnes of relief goods had been airdropped and scores of helicopters were flying in rescuers and aid.

Officials said quilts, tents, food and satellite phones were needed most. The Health Ministry said medical needs ranged from basics like bandages and antibiotics to sophisticated equipment such as ventilators and kidney dialysis machines.

In some villages near the badly hit area of Beichuan, angry residents complained they had had little to eat and were forced to drink contaminated water.

Many are sleeping outside or in makeshift shelters where the lack of water and blocked toilets has raised fears of disease, but the Health Ministry said there had been no reports of epidemics.

Minister for Water Resources, Chen Lei, said such damage was widespread and sounded far from assured in comments put on the ministry Web site (www.mwr.gov.cn) on Thursday. He blamed more than nature for the dangers.

“Because the management systems of hydro-power stations are not smooth and information channels are blocked, the extent of their damage is unclear,” Chen said.

Premier Wen Jiabao, a geologist himself, has made emotional appeals from the disaster zone urging on workers and comforting orphaned children.

The China Nuclear Engineering and Construction Corp reported that several of its facilities in Sichuan were damaged.

It did not mention any radiation leaks. A Western expert with knowledge of the Mianyang lab said it was not likely the facilities were at serious risk.