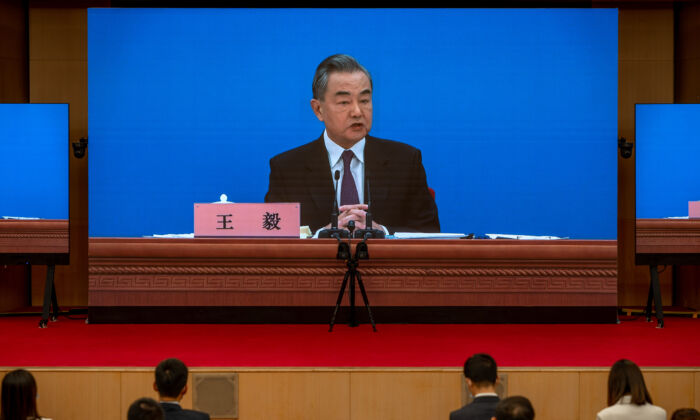 Chinese Foreign Minister Wang Yi is seen on large screens as he holds a press conference at the Media Center in Beijing, on March 7, 2022. (Andrea Verdelli/Getty Images)
Chinese Regime

On day 12 of Russia’s invasion of Ukraine, the communist regime in China described its relationship with Moscow as “rock solid,” and one that “will not be influenced by third parties.”

The regime made the statement amid growing international calls for Beijing to condemn Moscow’s aggression, a position the regime has continually refused to take.

Chinese Foreign Minister Wang Yi on March 7 referred to Russia as Beijing’s “most important strategic partner,” and the two countries’ ties as “one of the most crucial bilateral relationships in the world.”

“No matter how perilous the international landscape, China and Russia will maintain a strategic focus and promote the development of our comprehensive strategic partnership and coordination in the new era,” Wang told reporters at a news conference on the sidelines of the annual meeting of the country’s rubber-stamp legislature in Beijing.

The top diplomat’s comments came a day after the United States and Australia called on Beijing to join global action against Russia over the conflict.

Russia launched the invasion less than three weeks after Chinese leader Xi Jinping and President Vladimir Putin, on the opening day of the Winter Olympics in Beijing, declared a partnership that had “no limits.”

The leaders issued a lengthy joint document in which Russia endorsed Beijing’s territorial claims on self-ruled Taiwan, and the Chinese regime backed Russia in opposing the further enlargement of NATO, a key justification for the invasion.

Since the invasion, the Chinese regime has repeatedly refused to openly back either side, instead walking an awkward diplomatic tightrope that observers note includes inconsistent messaging.

The Chinese regime has refused to characterize Moscow’s actions as an invasion and has blamed Washington for instigating the conflict. It has also asked Western countries to respect Russia’s “legitimate security concerns,” while maintaining that all countries’ sovereignty should be respected. Meanwhile, it has called for negotiations to resolve the crisis.

China has abstained in two United Nations votes, including a U.N. Security Council proposal demanding that Moscow stop its attack on Ukraine and withdraw its troops immediately.

Further, Beijing has refused to join the United States, Europe, and others that have imposed sanctions on Russia. Instead, the regime said it would continue normal trade with Moscow and has lifted restrictions on Russian wheat imports.

Such actions have led many to conclude that Beijing has effectively taken a pro-Russia stance, but doesn’t want to openly do so for fear of stirring anger or sparking sanctions from the international community.

Asked why Beijing refuses to denounce Russia’s assault, Wang repeated that Beijing judges “Ukraine’s situation” based on “the merits of the matter.”

The U.N. human rights office said on March 5 that at least 364 civilians have died since the Russian invasion began, while noting the figure is likely a vast undercount. More than 1.7 million people have fled the war in Ukraine.

U.S. Secretary of State Antony Blinken told Wang in a phone call on March 5 that “the world is watching” to see which nations stand up for freedom and sovereignty.

At the March 7 briefing, Wang said that Beijing would work with the international community to provide “necessary mediation when needed,” but didn’t provide details.

Amid the war, much attention has been paid to the predicament faced by self-ruled island Taiwan, which, like Ukraine, faces rising aggression from its larger neighbor bent on bringing the territory under its control, by force if necessary.

Wang, however, sought to dismiss the conflation of the issues of Taiwan and Ukraine, claiming that doing so is applying “a naked double standard” because the island has always been a part of China and is thus a domestic issue—a long-held position of the Chinese Communist Party—while the Ukraine crisis is a dispute between neighboring countries.

The Chinese regime has dramatically dialed up its military harassment of the democratic island in recent years as part of a campaign to intimidate and wear out Taiwan’s defenses. Meanwhile, Taiwan has stepped up its alert level since the war in Ukraine began, but it has reported no unusual military movements by China.

In response to Wang’s remarks, Taiwan’s Mainland Affairs Council said the Chinese regime’s actions, including its military harassment and efforts to diplomatically isolate Taipei, are the real cause of escalating regional tensions.

“It also explains why it is unwilling to condemn Russia’s aggression,” the council said in a statement.

Taiwan’s Foreign Minister Joseph Wu, in announcing millions of dollars in aid for Ukrainian refugees, said on March 7 that the Taiwanese people are drawing inspiration from Ukraine’s fight against Russia.

“Let me say this from the bottom of my heart: You have been an inspiration to the Taiwanese people in facing threats and coercion from authoritarian power,” he told a news conference in Taipei.

“Many Taiwanese people will say as I do now: I’m Ukrainian,” Wu said, sitting in front of a large Ukrainian flag emblazoned with the message: “Taiwan Stands with Ukraine.”