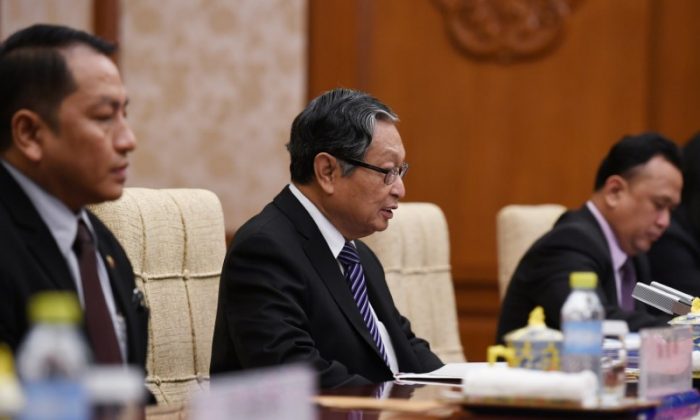 Burma's Minister of the Office of the State Counsellor Kyaw Tint Swe (C) speaks during a meeting with Chinese Foreign Minister Wang Yi (not seen) at the Diaoyutai State Guesthouse in Beijing, China on June 28, 2018. (Greg Baker/Reuters)
By Reuters

BEIJING—China believes that Burma is now ready to take back hundreds of thousands of Rohingya Muslims sheltering in Bangladesh who have fled violence in the country’s Rakhine state, the Chinese government’s top diplomat told his Bangladeshi opposite number on Friday.

Since August 2017, about 700,000 Rohingya Muslims and Hindus have fled a military crackdown in mainly Buddhist Burma, many reporting killings, rape and arson on a large scale in the western state of Rakhine, U.N. and other aid organizations have said.

In May, the United Nations said it had struck an outline deal with Burma, also known as Myanmar, aimed at eventually allowing them to return.

Chinese State Councillor Wang Yi said that on Thursday he met minister of Burma’s State Counsellor Office Kyaw Tint Swe in Beijing, and heard a report from him on how Burma was trying to resolve the repatriation issue.

“I strongly felt that the Myanmar side has already prepared to receive these people who have entered Bangladesh to take refuge,” Wang said, speaking to reporters with Bangladesh Foreign Minister Abul Hassan Mahmood Ali at his side.

“We really hope to see that the return process, especially the first batch of returnees, can be realized as quickly as possible,” Wang said.

China will provide help and play a constructive role, and China has already provided pre-fabricated houses to Burma for those who return, and for Bangladesh China has provided tents and other humanitarian supplies, he added.

“We would like to see and believe that with the hard work of Bangladesh and Myanmar, this repatriation process can begin as soon as possible.”

China has close relations with Burma, and has backed what Burmese officials call a legitimate counter-insurgency operation in Rakhine.

Ali said he had detailed talks with Wang about the Rohingya.

“In this regard we have sought China’s support in ensuring a conducive environment in Rakhine state for early repatriation of these displaced people back to their homeland,” he said.

“China has assured (of) her continued support in resolving this issue. I think we have received tremendous support from China on how to resolve this problem.”