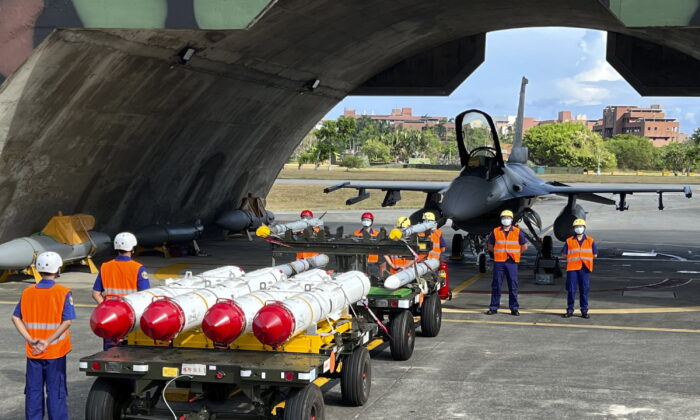 Military personnel stand next to Harpoon A-84, anti-ship missiles and AIM-120 and AIM-9 air-to-air missiles prepared for weapons loading drills in front of an F16V fighter jet at the Hualien Airbase in Taiwan, on Aug. 17, 2022. Taiwan is staging military exercises to show its ability to resist Chinese pressure to accept Beijing's political control over the island. (AP Photo/Johnson Lai)
US-China Relations

China Sanctions CEOs of US Arms Firms Over Sales to Taiwan

The Chinese regime said on Sept. 16 that it is sanctioning top executives of two U.S. arms firms in retaliation for recently selling arms to Taiwan.

The sanctions were imposed on Gregory J. Hayes, CEO of Raytheon Technologies Corporation, and Theodore Colbert, CEO of Boeing Defense, Space and Security, for the involvement of their companies in the deal, Chinese Foreign Ministry spokesperson Mao Ning said at a regular briefing on Friday.

The move came after the State Department on Sept. 2 approved a potential $1.1 billion sale of military equipment to Taiwan. The package includes 60 anti-ship missiles and 100 air-to-air missiles, of which the principal contractors are Boeing Defense, a division of Boeing, and Raytheon, respectively.

Ning did not provide details on what the sanctions entailed or how they would be enforced. Previous sanctions on Western individuals have barred them from entering China or doing business there. Such restrictions are unlikely to significantly affect Hayes or Colbert.

The Chinese regime routinely reacts aggressively and punitively against U.S. measures in support of Taiwan, a self-ruled island that the regime considers to be its own and if necessary, to be taken by force. Taiwan, however, has never been ruled by the Chinese Communist Party and has been a separate entity for more than 70 years.

The Chinese regime also slapped unspecified sanctions on Pelosi in retaliation for her visit.

The United States is Taiwan’s largest arms supplier and is bound by law to provide Taiwan with the means to defend itself.

The Chinese regime has previously sanctioned Raytheon, Boeing Defense, and unspecified individuals involved in arms sales to Taiwan. But Friday’s announcement marks the first time China has named individuals from those companies as targeted by sanctions.

Earlier this week, a Senate committee approved a key bill that would significantly boost U.S. support for Taiwan. It includes $4.5 billion in additional security assistance over four years and support of Taipei’s participation in international organizations.

While the move drew protest from Beijing, bipartisan lawmakers hailed the legislation, which they said was needed to solidify the United States’ relationship with Taiwan.

Rep. Steve Chabot (R-Ohio) said that the bill was a vital step in ensuring that Taiwan could maintain its defenses and deter a possible invasion by forces of the Chinese Communist Party.

“We have to make sure that Taiwan is completely able to defend itself, it’s able to have a strong economy, and that it’s not going to be bullied by [China], which they try to do all the time,” Chabot told NTD, sister media outlet of The Epoch Times, on Sept. 14.

The Taiwan bill is likely to be folded into a larger piece of legislation expected to pass later this year, such as the National Defense Authorization Act (NDAA), an annual bill setting policy for the Department of Defense.

The Epoch Times reached out to Boeing, Raytheon, and the State Department for comment but did not receive a reply before publication time.