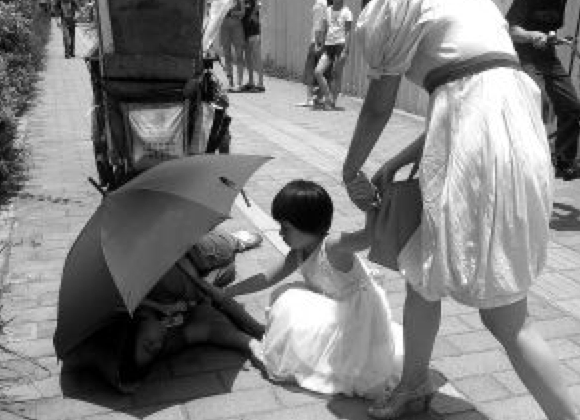 In China, sometimes it is hard to know which media reports are true and which are false. The following six supposed news reports have all been debunked.

On March 26, 2013, many Chinese media outlets covered a story of a young woman named Wenfang feeding an old homeless man. She was named “the most beautiful girl in Shenzhen.”

The act of compassion was apparently phony and just meant to attract media attention. A witness told Xinhua Net that Wenfang fed the old man only to pose for the camera. After her boyfriend was finished taking the picture, the two left immediately and didn’t care about the old man anymore.

Dajiang News reported that Zhu Jing from Wenzhou in Zhejiang Province returned to his hometown on March 27, 2013 after an absence of over nine years.

Poverty-stricken, Zhu had left home in 2004 to look for work. But luck was not on his side. After continuous failures he became homeless, lost contact with his family, and in addition developed a serious case of tuberculosis. He was finally sent home from a shelter in Jiangxi Province.

Upon coming home, his older brother told Zhu that he had struck it rich, as there had been a land development project a few years ago and he had been given a land compensation settlement of seven million yuan (US$1.15 million).

Unfortunately for Zhu, this story was fake too. A reporter of Modern Gold News did some investigating and discovered it was “seriously inconsistent with the facts.”

During the 2013 Chinese New Year, a video spread on China’s Internet about a foreigner having spent a million yuan on five tons of firecrackers.

But somehow the story had become blown way out of proportion. According to a notice circulated by the Liuyang municipal government in Hunan Province and printed by Xinhua Net on Feb. 16, the video was about a small fireworks company from Denmark holding a mini firecrackers show in Liuyang in the summer of 2012. There was no five-ton, million-dollar deal.

On Feb. 19, CCTV’s National News program and its website both reported a major change in the country’s medical billing practices. Quoting the Health Department, CCTV said that “paying after treatment” will be implemented nationwide. Previously, patients had to pay for medical treatment in advance. With the new policy, hospitals will pay in advance, and patients only need to pay their out-of-pocket portion to the hospital after the treatment; the remainder will be paid by health insurance. The new system is already being implemented on in more than 20 pilot provinces, it said.

CCTV aired the good news in the morning, the Health Department denied it in the afternoon. But the news had already caught the public’s attention. While an industry specialist warned that the plan was “a double-edged sword,” and would require hospitals to come up with higher standards in diagnosis and treatment, netizens just called it “the most beautiful fake news.”

5. Internet Date Turns Out to Be Daughter-in-Law

Heilongjiang Morning News reported on an embarrassing date in the city of Muling on Oct. 22. 57-year-old Mr. Wang became smitten by “Lonely Flower” on the Internet. When they met for a date at a hotel, he discovered that Lonely Flower was his daughter-in-law, the report said.

Later, Heilongjiang Morning News made a retraction and issued an apology, saying after careful further verification, the news proved to be false. The Muling Police Department also verified that the story was made up by Muling TV station reporter Wei Hongji, it said. “We sincerely offer our apology to our readers.”

Stories abound in China of people having accidents or collapsing in the street and nobody helping them. But on Aug. 1, XKB.com published an article of a child helping a woman street cleaner who was suffering from heat exhaustion. The article was titled “Thank you, child!” and showed a photo of a little girl holding an umbrella over a woman lying in the street.

According to the article, the woman had collapsed on Huangcun East Road near the Dongpu Bus Station in Tianhe District. People passed by but didn’t stop to help. Then a little girl held an umbrella over the woman’s head to shield her from the sun and said to her mother, “Mom, save her!” Seeing the child’s action, two passer-by finally reached out their helping hands and woke her up.

If this story didn’t make you cry, what follows, may. The whole thing was a hoax. According to People’s Daily Online, XKB admitted the following day that “the photo full of love” turned out to have been staged.

“They told me they wanted to film an advertisement for umbrellas,” Tang said. “If I knew it was to be published in the newspaper to fool people, I would never have agreed to do it.”

Tang said the little girl’s mother was one of the four people who asked her to participate in the advertisement. It took them an hour and a half to take the picture printed in the newspaper. They told her to lie down on the ground three times for the camera to get the perfect angle. The little girl was paid 150 yuan. “I feel I was being used,” she said.

Whether or not these debunked stories are actually true is hard to say. State media CCTV, Xinhua, and People’s Daily are also known to be masters at fabricating news.