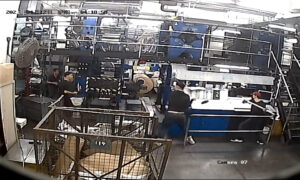 A Taiwan newspaper and a Hong Kong newspaper have independently reported that Zhou Yongkang, formerly one of the most powerful individuals in the Chinese regime, has been arrested. Regime officials have not commented on or confirmed the reports, but experts say that, if Zhou has not yet been arrested, it is only a matter of time until he will be.

The reports on Dec. 2 by Taiwan’s United Daily News and on Dec. 3 by Hong Kong’s Sing Tao Daily are only the most recent claims that the Chinese Communist Party (CCP) has cracked down on Zhou Yongkang, who headed China’s domestic security apparatus for five years.

Shi Changshan, a Washington, D.C.-based analyst of Chinese politics, said, “Arresting Zhou Yongkang is just a matter of timing. It involves so many complicated issues for the CCP that any careless move could cause political turbulence.”

According to Shi, the Party wants the reports of Zhou’s arrest to have a few days to circulate as a way of testing the waters of public opinion. The slow rollout of the arrest news also serves to minimize the potential impact when the news is finally confirmed, according to Shi.

Zhou Yongkang served from 2007 to 2012 as the head of the Political and Legal Affairs Committee (PLAC), the Party organ that controlled almost all aspects of law enforcement, including police, the People’s Armed Police, the courts, lawyers, the procuratorate, the labor camps, and prisons.

Zhou had a budget of over $US100 billion dollars—more than the official defense budget—and in the People’s Armed Police commanded a paramilitary force of 1.1 million. Prior to heading the PLAC, Zhou was its deputy director for five years and also simultaneously director of the Ministry of Security.

From 2007 to 2012 Zhou was a member of the Politburo Standing Committee, the group of nine who ruled the Party.

Holding the combined posts of head of the PLAC and member of the Standing Committee, Zhou formed a second center of power in the CCP, almost independent of then-General Secretary Hu Jintao and was a threat to other Party leaders.

During his ten years at or near the top of China’s security apparatus, Zhou Yongkang used the persecution of the spiritual practice of Falun Gong, which he enthusiastically implemented, to expand his budget, increase his power, and tear up any restraints posed by China’s legal system, according to Epoch Times commentator Heng He.

Prior to his taking leading positions in the security apparatus, Zhou headed the CCP in southwestern China’s Sichuan Province, and formed a network of officials there loyal to him.

Earlier in his career he had headed the state-owned China National Petroleum Corporation. He has been referred to as the godfather of petroleum industry, because of his success in making sure his people ran the wealthy and politically key sector.

Taking Down a Tiger

In a speech in January 2013 Xi Jinping referred to how the CCP needed to be bold enough in the anti-corruption campaign he had launched to go after “tigers,” by which he meant high-ranking officials. Zhou, if arrested, will qualify as a big tiger.

Since March 2012, when Zhou Yongkang’s ally and former Politburo member Bo Xilai was arrested, the sources of Zhou’s power have been systematically stripped away.

Among those believed to have been arrested now: Zhou’s cronies and former subordinates in the oil industry and in Sichuan Province; the Zhou family’s personal money launderer, Wu Bing; and Zhou’s son, Zhou Bin.

According to Sing Tao’s Dec. 3 report, a document is being passed around among high Party officials detailing the reasons for arresting Zhou Yongkang.

According to Heng He, the arrest of such an important Party figure as Zhou has to go through a certain protocol.

“The official announcement of Zhou’s arrest couldn’t be made before he was totally controlled,” Heng He said. “Then, high ranking officials are informed, then middle ranking officials, and then the public last.”

There is special care needed in Zhou’s case because, as former security czar, he is assumed to know all of the Party members’ secrets. Activity on China’s Internet seemed to prepare the public for possible surprising disclosures.

On Dec. 2, the day of the United Daily News story reporting Zhou’s arrest, searches on China’s Internet for “Zhou Yongkang” were blocked. Later, though, a message began to circulate saying that, since Zhou had been head of the secret agents in China, sensitive information about other Party leaders would now be revealed.

The importance of arresting Zhou first of all involves breaking with what had been understood to be a strict unwritten law, according to Heng He. Members of the Politburo Standing Committee were understood to have a lifetime get out of jail free card and could not be arrested. By arresting Zhou, the Party leadership is going into uncharted territory.

The charges brought against Zhou will likely not reflect the importance of his arrest, said Heng He. Zhou’s ally, Bo Xilai, was charged with bribery, corruption, and abuse of power, rather than other, far more serious crimes.

Zhou will likely be treated in a similar way, although Heng He suggests he might also be charged with murdering Party members.

The leadership’s real reason for taking Zhou down, according to Heng He, is the plans he and Bo Xilai had made to unseat current Party head Xi Jinping soon after he took power. The leadership could not allow that coup attempt to go unpunished.