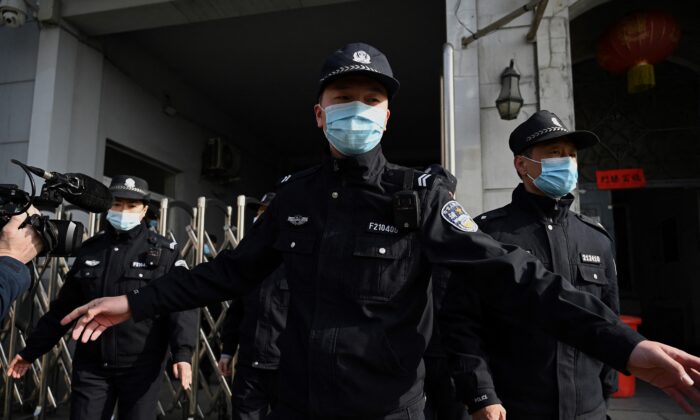 A Chinese human rights lawyer was summoned to a disciplinary hearing for his speech in defense of a client. The lawyer’s peers warned that the Chinese Communist Party (CCP) is eroding the legal profession in the country.

Beijing-based lawyer Song Yusheng was summoned to a hearing with the Disciplinary Board of the CCP-linked Beijing Lawyers Association (BLA) on Jan. 11. The Board charged him with “malpractice” during a trial, accusing Song of speaking in a politically sensitive manner.

Another rights lawyer, speaking to The Epoch Times on the condition of anonymity, said that the BLA contradicted itself in its accusation, since malpractice can only apply to a lawyer’s conduct and not what he says in a courtroom, according to their own rules.

“An attorney’s court speech clearly falls under the category of speech rather than conduct,” said the rights lawyer. “Arbitrary confusion of the two things would mean overstepping the association’s authority.”

He said Song’s case as well as recent cancellations of rights lawyers’ licenses affirm that China’s judicial ecosystem has rapidly been deteriorating since regime leader Xi came to power.

“On the surface, [they] are punishing lawyers,” the lawyer said. “But they are silencing all voices from citizens.”

“It’s a signal [they are] moving further toward brutality and degeneration.”

Song said that one year ago, he received a complaint accusing him of malpractice from the Daqing High-tech Industry Development Zone Court, where he represented his client Song Liqin, a 70-year-old Falun Gong practitioner in Heilongjiang Province.

Song Yusheng prepared a defense for the elderly woman who was arrested on Sept. 11, 2019, around the Daqing People’s Hospital. Security agent Feng Haibo took her keys away and led a team to raid her home without her being present. They seized her Falun Gong books; an image of Li Hongzhi, the founder of Falun Gong; used cellphones; and 6,000 yuan ($901) in cash.

Falun Gong is a spiritual practice composed of meditative exercises and a set of moral teachings centered on the principles, truthfulness, compassion, and tolerance. Since 1999, the CCP has persecuted Falun Gong practitioners, imprisoning and killing them for maintaining their beliefs.

On Dec. 30, 2021, Song received a call from the BLA notifying him to appear at a hearing and respond to the complaint from a court session in which he previously defended a client.

Song told The Epoch Times on Jan. 11 that the biggest issue at his hearing was that the investigators refused to present the letter of complaint as well as evidence against him.

The lawyers’ association of Chaoyang District, Beijing, and the local judicial bureau found the Daqing court’s accusations groundless after their investigation.

The complaint was about what Song said during a defense case. Rights lawyer Wang Quanzhang, one of Song’s defenders, told The Epoch Times on Jan. 11, that unjustly seeking lawyers’ accountability for their discourse in court, in whatever way, is a dangerous precedent.

Wang noted the wording of the complaint used terms such as “publicly promoted,” “repeatedly,” and “as law clearly stipulates.” He said these terms provided a biased description of the relevant facts.

Previously, he said, the Chinese authorities targeted rights lawyers with charges of disrupting justice by commenting on cases in interviews with media outlets or on their social media channels.

Once such a precedent is set, China’s whole body of lawyers would be endangered, Wang warned.

Hong Ning and Gao Miao contributed to this report.