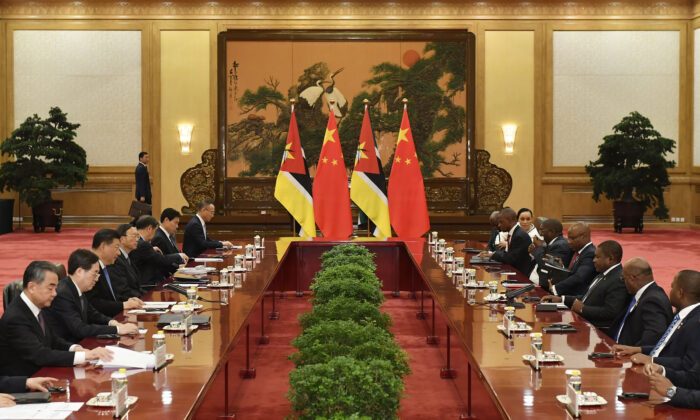 State media in China republished a story from 2 years ago about a Chinese man who was given the title of a tribal chief in one African country. The story sparked concerns over the Belt and Road Initiative (BRI)—the Chinese Communist Party’s (CCP’s) global infrastructure development strategy—being applied as a part of its expansion into Africa.

The title was awarded to Chinese engineer Kong Tao in Nigeria on April 20, 2019. He worked there as the general manager on the Aduja-Kaduna railway project, according to a Dec. 5 report from Chinese online service Sina. The project, completed in 2016, was one of many major BRI infrastructure projects in 52 out of 54 African countries, according to the Observer Research Foundation.

While many completed BRI projects garner short-term favor in recipient countries, the long-term, unrepayable debt allows the CCP to leverage land and resources from those countries.

However, the BRI projects lead to massive debt, a sort of “debt trap” according to Zheng Yushuo, a scholar at City University of Hong Kong, who has visited Africa to investigate the local economic and social situation, VOA reported on Dec. 9.

“The problem now is that the projects are not making money or even losing money,” Zheng said. When the government can’t repay the debt, the CCP seizes assets based on previously signed contracts, he added.

On Dec. 5, the Wall Street Journal reported that according to U.S. intelligence, the CCP plans to build its first permanent military base in the Atlantic Ocean in the small central West African nation of Equatorial Guinea. The intelligence suggests that Chinese warships will have the ability to resupply and rest across the U.S. East Coast in the future, a threat that has alerted the White House and Pentagon.

Lin Tinghui, deputy secretary-general of the International Law Institute of Taiwan, told the Chinese edition of The Epoch Times that the CCP seems to be helping Africa, but in fact, it has become another “colonial empire” after the withdrawal of former European rulers.

Uganda, an East African country, borrowed $200 million from China six years ago to rebuild its only airport as part of the Belt and Road project, but now faces insolvency. Joel Ssenyonyi, who chairs the committee of the parliamentary probe, told Reuters on Nov. 29 that the terms of the loan allow the CCP to “grab” the airport in case the other side defaults. The agreement also requires that any arbitration or court action on the dispute be conducted in China under Chinese law.

In late 2018, East Africa’s Mombasa Port was at risk of a CCP takeover after Kenya defaulted on a huge rail debt. In March, the Kenyan government clarified that the port of Mombasa would not fall into the hands of the CCP, even if the country failed to repay its more than $3.2 billion loans on time, reported the Chinese language edition of DW News on June 10, 2021.

The CCP’s global infrastructure strategy also expanded to setting up military bases in Africa. In July 2017, a Chinese military base was established in Djibouti, Horn of Africa—the first outside of China—reported BBC on July 12, 2017. According to U.S. Army Gen. Stephen Townsend who serves as Commander, United States Africa Command, China was expanding its existing naval installation adjacent to a Chinese-owned commercial deep-water port and also seeking other military basing options elsewhere on the continent, USNI News reported on April 20.