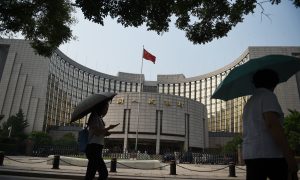 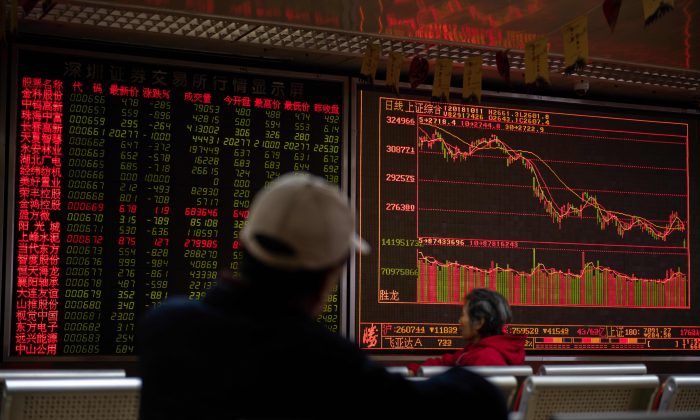 China has opened the liquidity floodgates.

Bank lending in China hit an all-time high in January, signaling that recent mandates to boost lending to businesses are taking broad effect.

In addition, China’s total social financing, a broad-based figure that measures total credit and liquidity in the economy—including shadow banking and capital markets activities—grew to 4.64 trillion yuan ($685 billion) in January, according to data from China’s central bank, the People’s Bank of China. That’s more than three times December’s credit activity of 1.59 trillion yuan.

While January has traditionally been a busy month for banks, due to a reset of annual lending caps, amounts lent so far in 2019 have exceeded all expectations.

And with that, the Chinese communist regime has fully abandoned efforts since 2017 to rein in credit growth. Beijing officials so far have downplayed the effects of lending growth, telling Chinese business news media Caixin that “growth in social financing doesn’t indicate that China is opening the credit floodgates, as the new borrowing meets actual economic demands and remains at a stable level.”

Despite the denials, it’s fully apparent what’s at play here: Beijing is taking an extremely loose monetary-policy position, embarking on its most aggressive stimulus measures since 2015.

Bank loans topped 3.23 trillion yuan ($477 billion) in January, its highest reading since 2002, according to Caixin.

Dating to the end of 2018, Beijing has announced several new stimulus measures to combat recent economic weakness. In early January, policymakers cut the required reserve ratio at domestic lenders by 50 basis points to encourage lending, especially to privately owned businesses. Beijing also front-loaded local bond issuances in January to get a head start on economic growth for the first quarter.

So what does this mean? In all likelihood, the market will react positively in the short term.

With total debts in China at about 300 percent of GDP and with economic growth stagnating, there was really only one viable path for the Chinese regime. The flow of credit offers a lifeline to many overleveraged Chinese companies and governments, which need to roll over their current debt.

“This confirms what the market has been moving to discount in recent weeks [i.e., the familiar Chinese monetary path of tightening begets easing] and augurs well for strong resurgence in year-over-year EPS in [the second half of] this year,” Morgan Stanley emerging markets strategist Jonathan Garner wrote in a note to clients on Feb .15.

There are two items to watch going forward. One is off-balance sheet shadow banking activity, which grew in January year-over-year for the first time in more than a year. It will be interesting to see whether Beijing will officially reverse course in its policy toward shadow banking activity, an area it had looked to block over the last two years.

Another theme to track is the recent rally in onshore equities. The Shanghai Composite Index is up, somewhat unexpectedly, almost 9 percent since Jan. 1. But in hindsight, it makes sense. Beijing has been carefully managing the narrative to support near-term equities inflows, from ramping up stimulus measures to projecting positive development of the continuing U.S.-China trade war.

This year marks a major debut of Chinese financial markets onto the global stage. Two major stock indices will begin including Chinese domestic A-shares into their widely used benchmarks: The FTSE Russell is expected to include Chinese A-shares in its Emerging Markets Index, and MSCI is expected to increase its allocation of Chinese A-shares to 20 percent. Bloomberg announced in January that yuan-denominated Chinese government and bank securities would be included in its major fixed income benchmark, the Bloomberg Barclays Global Aggregate Index. These actions would induce global asset managers who reference these widely benchmarked indices to buy Chinese stocks and bonds.

Given this backdrop, Beijing authorities will likely pull out all the stops to boost onshore equity markets.

But there are signs that the economic slowdown will worsen and China will likely need to pursue even more aggressive monetary loosening to keep pace.

China’s producer’s price index rose just 0.1 percent in January, according to the National Bureau of Statistics on Feb. 15. That figure, down from 0.9 percent in December, is barely above deflation territory.

Consumer price index—the main gauge for prices of goods and services—was 1.7 percent year-over-year in January, coming in below the consensus expectations of 1.9 percent, according to Reuters. Both readings are concerning, indicating that demand remains soft across the spectrum.

Beijing has mobilized financial regulators to keep the pressure on banks to keep lending, and more recently, told the country’s banking regulator, China Banking and Insurance Regulatory Commission, to “be more tolerant on non-performing loans,” according to a South China Morning Post report.

But these are only short-term remedies that don’t address the fundamental issue of slowing demand and high debt load. And they don’t take into account possible consequences of the U.S.-China trade war, should it continue for much longer. The negative effect of that will have a far greater effect on the Chinese economy.

“There’s some short-term inflows into the Asian market, but I don’t think it will be sustainable. At the end of the day, without improving the fundamentals, I don’t think any technical rally can go on for a very long time,” David Cui, head of China equity strategy at Bank of America Merrill Lynch, told Bloomberg News on Feb. 14.

“This will merely aggravate the country’s debt and over-investment problems,” Arvind Subramanian, senior fellow at the Peterson Institute for International Economics, wrote in a Feb. 5 article for Project Syndicate, a news analysis website. “One way or another, China’s continued defiance of the ‘laws’ of macroeconomics, geopolitics, and economic development will hasten its inevitable return to normalcy.

“When that happens, the world had better brace itself.”