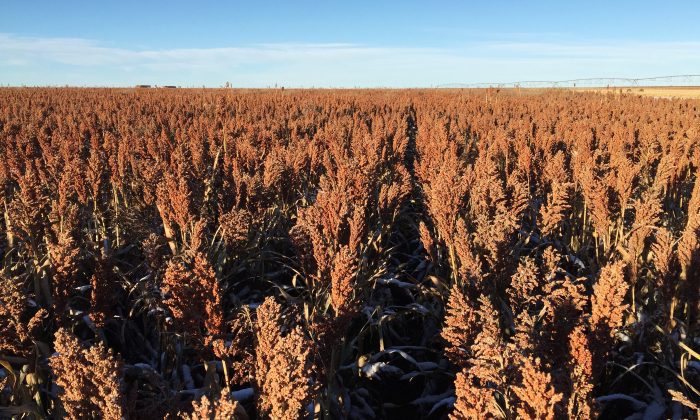 A field of sorghum (milo) grain is seen at a farm outside of Texhoma, Oklahoma, U.S., in this undated photo released to Reuters on April 3, 2018. (Courtesy Jerod McDaniel/Handout via Reuters)
China-US News

BEIJING—China dropped its anti-dumping probe into imports of U.S. sorghum and cancelled anti-dumping duties on May 18, beating a hasty retreat from a dispute that wreaked chaos across the global grain market and raised concerns about rising costs and financial damage at home.

The move was seen as a goodwill concession as Chinese Vice Premier Liu He was in Washington for talks aimed at resolving trade tensions between the world’s two largest economies.

China’s Commerce Ministry said in a statement that the investigation into a critical ingredient for animal feed and liquor had revealed that anti-dumping and anti-subsidies penalties would inflate costs for Chinese consumers.

The investigation was launched in early February. Then, last month, Beijing also imposed hefty anti-dumping deposits on imports of the grain.

“They [China] are showing goodwill by halting its anti-dumping investigation into sorghum imports, but it is a cheap way of showing goodwill as the U.S. does not have much sorghum left to export. The next U.S. sorghum crop will be harvested in August,” said Ole Houe, director of advisory services at brokerage IKON Commodities in Sydney, Australia.

Agricultural products are considered one of the most powerful weapons in Beijing’s arsenal because a strike against farm exports to China would hurt mostly states that are voter bases for U.S. President Donald Trump.

The United States accounts for more than 90 percent of total sorghum shipments to China, with imports from the U.S. worth $1.1 billion last year, according to Chinese customs data.

Frantic Chinese importers, who faced crippling extra costs to doing business, had lobbied the Chinese regime to rethink the plan.

The Chinese regime’s probe had sparked worries that tariff-inflated costs for the grain would be passed onto feedmakers and eventually push retail meat prices higher.

Corn, soybean, and soymeal futures fell after news of the probe being dropped, as worries over feedmakers having to find alternative ingredients eased.

The ministry said it would return the deposits it had collected. The news brought some unexpected relief to Chinese buyers who still had cargoes stuck at ports.

“This is great news! We are now saved,” said a private sorghum trader who had over 600 tons of U.S. sorghum stranded at a Chinese port. “We will clear our goods immediately today.”

Trade tensions between the two countries remain high. Beijing still threatens to slap retaliatory 25 percent tariffs on a swathe of U.S. farm goods, including sorghum and soybeans, after the United States proposed $50 billion worth of tariffs on imported Chinese tech goods.

By Hallie Gu and Josephine Mason