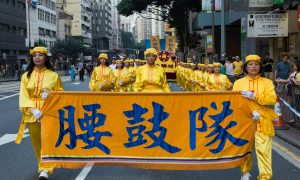 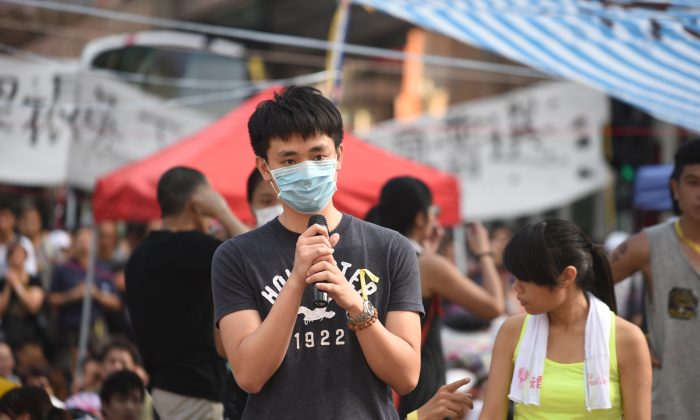 Oct. 1 is officially known as National Day in China, the anniversary of the founding of the People’s Republic of China. Unofficially, Oct.1 is the first day of “Gold Week,” which means a time for shopping, which means Hong Kong for those in mainland China.

Gold Week this year is getting a straightened observance in Hong Kong, as Beijing is trying to keep mainland tourists at home. The views of Mr. Chen help explain why.

Epoch Times caught up with Mr. Chen along with his mother, wife, and son in the Admiralty district of Hong Kong, ground zero for the Occupy Central protests for universal suffrage that are convulsing the city.

“We came here just to let our child to see what democracy is. We hope he can also fight for democracy in the future.” Mr. Chen said, “Hong Kong is a democratic society with the rule of law. The Communist Party can’t deal with things recklessly.”

Beijing is treating sentiments like Mr. Chen’s like a contagion that needs to be quarantined. Authorities are blocking both regular media and social media from carrying information about Occupy Central, arresting mainland Chinese who express online support for the movement, and restricting travel to Hong Kong.

Although China has strengthened its internet censorship, information about Occupy Central has still leaked to mainland China, and many Chinese people are showing their support on the Internet for Occupy Central. Officials are hot on the trail of sympathizers, though, and there have been reports of dozens of arrests.

According to Amnesty International on Wednesday, at least 20 people have been detained by police in the last 2 days in different cities in mainland China for online posts showing support for Hong Kong protesters, or for planning to travel to Hong Kong to join the movement.

Another 60 people have been summoned by police for their online comments about Hong Kong.

Four of those pictured had shaved heads. In early September, the founders of Occupy Central shaved their heads in a show of determination, and the mainlanders’ shaved heads appear to be an imitation of that.

Han was summoned by the Beijing police for the alleged crime of “defiance and quarreling,” after this photo and other messages by him about Hong Kong appeared.

China researcher at Amnesty International William Nee said on Monday, “The rounding up of activists in mainland China only underlines why so many people in Hong Kong fear the growing control Beijing has in their city’s affairs.”

“The Chinese authorities must immediately release all those being detained for peacefully expressing their support for protesters in Hong Kong,” Nee said.

Authorities have sought to ban the group tours popular to Hong Kong at this time of year.

A Netizen with the “Big talk of Wuhu” published on Weibo, a twitter-like platform in China, “Tourism Bureau of Wuhu City [of eastern China’s Anhui Province] received a note from the provincial tourism bureau that all local travel agencies are not allowed to organize tourist groups to Hong Kong until after Oct. 7.”

“The tourist groups to Hong Kong that are already organized can continue to go, but make sure to give warning and education to tourists in advance to not go to protest areas or watch the gatherings.” the note says.

Another similar note issued in southwestern China’s Yunnan Province was also leaked on Twitter on Sept. 30. User @HKsfl posted a photo of the note titled “emergency notice” with a stamp of Yunnan Provincial Tourism Development Commission, saying, “Due to Hong Kong’s Occupy Central movement, all tourist companies are not allowed to organize tourist groups to Hong Kong from today.”

Mr. Hu from Hangzhou City of eastern China’s Zhejiang Province has been donating food and living supplies to protesters in recent days, according to Apple Daily in Hong Kong.

Mr. Hu indicated that the Occupy Central is a big inspiration for mainland young people, because many of them worship money, are selfish, and lack national consciousness.

On Wednesday, young man who identified himself as from the mainland went to Hong Kong’s Mongkok district, where many protesting students have gathered. Although he wore a mask and didn’t divulge his identity fearing retaliation from the Chinese Communist Party (CCP) upon his return home, he gave a speech on stage.

He praised the protesters for being so peaceful and rational, unlike, he said, how the CCP’s propaganda had portrayed them, as “a riot.”

With reporting by Wang Wenjun and Wen Hanlin.