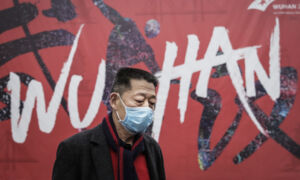 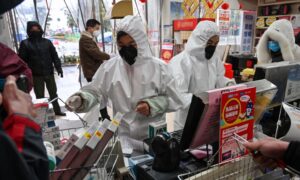 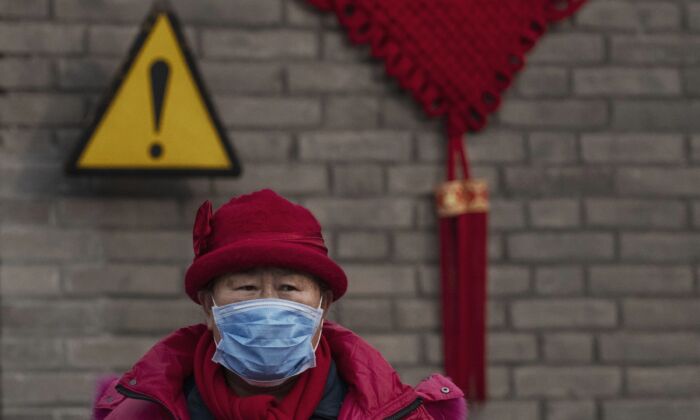 A Chinese visitor wears a protective mask as she was touring the grounds of the Temple of Heaven, which remained open during the Chinese New Year holiday in Beijing, on Jan. 27, 2020. (Kevin Frayer/Getty Images)
Coronavirus Outbreak

Beijing has banned private charities and volunteers from entering Hubei Province, the epicenter of the coronavirus outbreak, or sending materials to hospitals directly.

It’s unclear why authorities made the decision.

Meanwhile, Chinese netizens complained on social media that officially sanctioned charity organizations were complicated and slow in their processing, delaying shipments to hospitals in Hubei.

The deadly virus first broke out in Wuhan City, the capital of Hubei. As the illness spreads, the city has been pushed to the brink of a public health crisis, as hospitals report being overwhelmed with patients, many of them in dire need of medicine and supplies.

Since Jan. 22, the city has been on transportation lockdown to try to contain the virus; meanwhile, 18 of 19 cities in Hubei Province are now under quarantine. Travel restrictions have also delayed shipments of medical supplies.

China’s Civil Affairs Ministry published a Jan. 26 notice that banned any privately run charities or volunteers from entering Hubei, and added that all future donations should be handled by official, state-run charities instead.

According to the announcement, donated materials can’t be delivered directly to hospitals. All official charities must report donations to the Hubei provincial and Wuhan municipal disease control groups, and those agencies will allocate the materials to different hospitals.

Only after receiving instructions from officials can charities can arrange the shipments.

In recent days, Chinese netizens who initiated and organized group donations posted on social media about their experience dealing with China’s Red Cross, which is operated by local government authorities.

The netizens said they wished to donate large shipments of N95 masks—a type of mask that can filter out at least 95 percent of airborne particles—to Wuhan hospitals. But the masks were confiscated by Wuhan Red Cross staff and police officers.

On Jan. 27, the Wuhan Red Cross released a statement in response to the claim, saying that the netizens’ posts weren’t true, as the Red Cross only collects the donated materials and then reports them to the Wuhan Municipal Health Commission, which then arranges for distribution.

In 2008, when Wenchuan City, in Sichuan Province, was rocked by an 8.0-magnitude earthquake, China’s Red Cross came under fire for mismanaging donation funds.

At the time, Wang Haijing, then-Party secretary general of the Red Cross, also told Chinese state-run media that his organization typically charges less than 6.5 percent of total donations as “handling fees,” but only charges 2 percent during natural disasters.

China’s Red Cross and other Chinese state-run charities received more than 65 billion yuan ($9.4 billion) donations in total for earthquake relief efforts. But until now, Chinese charities only publicized the allocations for 15 billion yuan ($2.16 billion) of them.

On Jan. 23, eight hospitals in Wuhan posted on their official social media accounts to ask for donations. They said that they were out of critical medical supplies such as surgical gowns, medical caps, and N95 masks.

The hospitals said that they couldn’t receive materials from government authorities in time, while all online stores have sold out of such goods.

Since then, many doctors in Wuhan have pleaded for help on their Weibo accounts.

Dr. Hu Dianbo, who works at the Hubei Aerospace Hospital, was worried that his post might be deleted immediately by censors—or fearing the worst, he could face arrest—but was willing to take the risk to get much-needed supplies.

Doctors in Wuhan urged people to donate directly to hospitals because donations to the city’s health commission or Red Cross take time to be processed.

The Epoch Times couldn’t reach the doctors because their social media accounts were deleted, and the hospitals where they work refused to confirm any information.