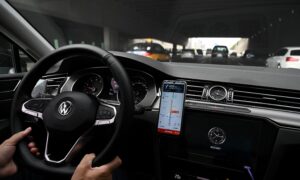 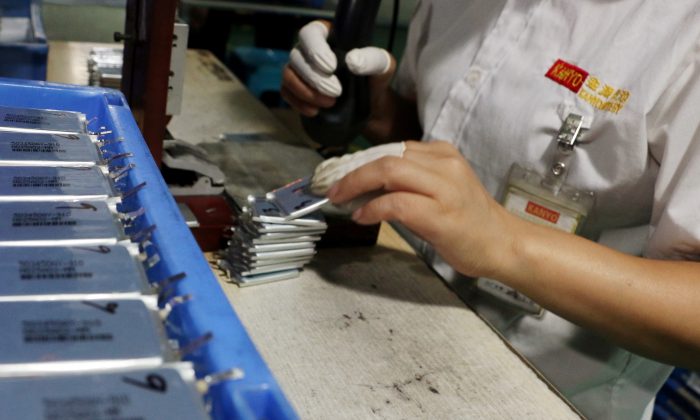 An employee works at a production line of lithium ion batteries inside a factory in Dongguan, Guangdong Province, China, on Oct. 16, 2018. (Joyce Zhou/Reuters)
Business & Economy

BEIJING—Growth in China’s vast manufacturing sector stalled for the first time in over two years in November as new orders slowed, piling pressure on Beijing ahead of crucial trade talks between Chinese leader Xi Jinping and U.S. President Donald Trump this weekend.

If the high-stakes negotiations fail, Trump is widely expected to proceed with a sharp tariff hike on Chinese goods in January, which would further strain China’s slowing economy and heighten risks to global growth.

Downbeat factory activity reading on Nov. 30 suggested a flurry of stimulus measures by Beijing in recent months has yet to be felt, adding to views that business conditions in China will likely get worse before they get better.

The official Purchasing Managers’ Index (PMI), released by the National Bureau of Statistics (NBS), fell to 50 in November, missing market expectations and down from 50.2 in October. It was the weakest reading in 28 months.

Analysts surveyed by Reuters had forecast little change from October’s already marginal growth levels. The 50-point mark is considered neutral territory, indicating no expansion in activity or contraction on a monthly basis.

“Manufacturing is now swerving oh so dangerously close to contraction territory—this will add further fuel to the global slowdown narrative which is taking hold,” Stephen Innes, head of Asia Pacific trading at OANDA, wrote in a research note.

The Trump administration has pointed to growing signs of economic weakness in China and its slumping stock market as proof that the United States is winning the trade war.

Trump sent mixed signals on Thursday about the prospects for a trade deal with China, saying an agreement was close but he was not sure if he wanted one right now.

Trump and Xi will have dinner on Saturday on the sidelines of a G20 summit in Buenos Aires, their first meeting since the world’s largest economies began imposing tariffs on each other’s goods earlier this year. So far, neither side has indicated any intention of making major concessions.

Even if a trade ceasefire is reached, the latest data suggested China’s economy will continue to weaken in coming months, with new orders faltering both at home and abroad.

The new orders sub-index—an indicator of future activity—declined to 50.4 from 50.8, with export orders shrinking for a sixth straight month.

Reflecting growing concerns over domestic demand, Chinese factories continued to cut back on their import orders for foreign goods last month. Production growth remained modest but was slightly weaker than in October.

Adding to pressure on manufacturers, factory-gate prices fell sharply amid softer demand, hurting profitability for sectors from petroleum processing to ferrous metal smelting. The factory-gate price sub-index pointed to a contraction for the first time since March.

A sister survey released by the NBS on Friday showed growth in China’s service sector moderated in November, but remained at solid levels. That is likely to cushion China’s slowdown somewhat, as services account for more than half of the economy.

The official non-manufacturing Purchasing Managers’ Index (PMI) dipped to 53.4 from 53.9 the previous month, with overall business confidence falling to 54.2 from 56.4 in October.

China’s policymakers are widely expected to launch more policy support and stimulus measures in coming months if domestic and external conditions continue to deteriorate and earlier steps prove slower-than-expected to kick in.

Economists at ING forecast the central bank will cut banks’ reserve requirement ratios (RRR) every quarter in 2019 to save private firms and avoid major job losses, if the trade war with the United States continues to escalate.

In recent weeks, speculation has also swirled over whether China may be considering its first benchmark interest rate cut in three years to give a more forceful push to activity, though that would risk adding to a mountain of debt and pressure the yuan currency.

“For now, the official PMIs suggest that policy easing is still struggling to put a floor beneath growth,” the consultancy wrote in a note.

Friday’s survey for the services sector also showed cooling momentum in the construction sector, which the NBS attributed to colder weather.

Regulators have been fast tracking infrastructure approvals to lift investment growth from record lows, but analysts say funding remains a concern and the moves may not put a floor under economic growth until the middle of next year.

While China is still expected to hit its official growth target of around 6.5 percent this year, some analysts believe that will cool to as low as 6 percent in 2019, the weakest expansion the country has seen in nearly 30 years.