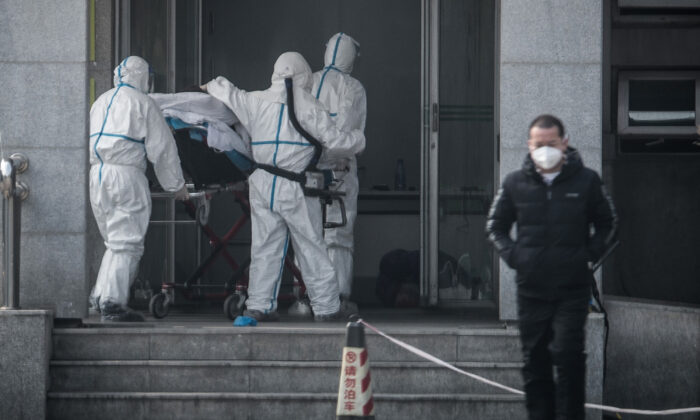 Medical staff members carry a patient into the Jinyintan hospital, where patients infected by a mysterious SARS-like virus are being treated, in Wuhan in China's central Hubei province on Jan. 18, 2020. (STR/AFP via Getty Images)
By Eva Fu

Chinese authorities on Jan. 19 reported one new death as a result of a viral pneumonia. Also, another 136 patients were infected, raising the global number of infections to more than 200.

That is the largest increase since the virus first emerged in the central Chinese city of Wuhan in late December.

The pneumonia disease has killed three so far, all from Wuhan.

The city’s Ministry of Health said that the new patients, aged from 25 to 89, were infected before Jan. 18.

As of Sunday, at least 170 people remained in Wuhan hospitals for centralized treatment, with 35 of them in serious condition and nine critically ill. The officials said they are also monitoring 90 others who had close contact with the patients.

Some 700 miles away from Wuhan, Beijing also confirmed two cases of infection on Sunday, and Guangdong Province in southern China confirmed one case, marking the first confirmation that the virus has spilled to other parts of the country. The two patients in Beijing have recently been to Wuhan, according to state media.

Thailand confirmed two cases of the new viral pneumonia, while Japan has reported one. All had recently traveled to Wuhan.

The new numbers rolled in just as Canadian and U.S. health authorities both began screening passengers from Wuhan at three of each country’s biggest airports.

Other countries, including Singapore, South Korea, Thailand, Indonesia, Malaysia, the Philippines, and Taiwan, have also announced measures to strengthen entry detection measures as the Lunar New Year approaches: peak migration season when large numbers of Chinese travelers are going to travel across Asia.

The Imperial College London’s Medical Research Council Centre for Global Infectious Disease Analysis released a report on Jan. 17, in which researchers estimated that 1,723 people in Wuhan could potentially have the illness.

One of the researchers, Neil Ferguson, said there is a possibility that the infection numbers may be significantly underreported in China.

A likely reason for the large discrepancy between the report’s estimate and the officially reported data is that the infection is in fact “widely disseminated across the population,” Ferguson said in an interview with The Epoch Times.

He noted that the Chinese authorities’ testing was insufficient, largely concentrating on people with exposure to a live animal and seafood market in the city, which authorities have linked with the spread of the disease.

“They should be getting widespread testing of people reporting respiratory diseases with pneumonia hospitals across the city,” he said.

Some of the patients in Wuhan, as well as the patients in Thailand and Japan, have not been to the seafood market, raising fears that the virus may be able to spread from person to person. Chinese officials, as well as the World Health Organization and the U.S. Centers for Disease Control and Prevention, have acknowledged a chance of human-to-human transmission.

Ferguson also said it was possible.

“If hundreds of people have been affected, it’s quite unlikely to just be due to the exposure to the market … so some degree of human-to-human transmission is quite likely to have occurred,” he said. “We know similar viruses and transmission is possible in some circumstances.”

He said that the current situation calls for more transparency and information sharing from the Chinese side in order to prevent its global spread.