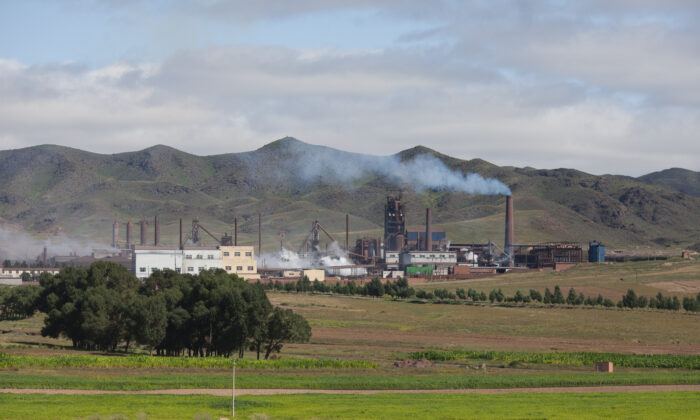 A photo taken on August 20, 2012 shows a general view of a rare earth refinery north of the inner Mongolian city of Baotou. On the edge of the Chinese city of Baotou, a 10-square-kilometre lake is blackened by pollution from factories processing rare earths, elements essential for the production of mobile phones and computers. (Ed Jones/AFP via Getty Images)
Chinese Regime

China is setting up a large and wholly controlled global logistics group. This new layout would help the ruling regime enhance its dominance in the global supply chain and maintain a monopoly position inside and outside of China, an expert said.

According to mouthpiece Xinhua media, newly established on Dec.6, China Logistics Group is a central enterprise under the direct supervision of the State-owned Assets Supervision and Administration Commission of the State Council, based on the integration of the former Railway Materials Group and Chengtong Group. The new group’s investors are comprised of China’s Eastern Airlines Group, COSCO Shipping Corp., and Merchants Group.

Meanwhile, China Rare Earth Group has been approved to be established in eastern China’s Jiangxi province by the end of the year. It will consist of state-owned Minmetals Corp., Aluminum Corp., and Ganzhou Rare Earth Group quoted various unnamed sources by the Wall Street Journal on Dec.7.

Mike Sun, a senior investment advisor living in the United States, told The Epoch Times that China already has a relatively monopolistic position in the international market for rare earth, and now that the Chinese Communist Party (CCP) has again integrated a global logistic group, it will gain more say and pricing power in the international arena.

Besides, it cannot be ruled out that rare earths will be used by China’s ruling regime to make deals with the western countries in the field of science and technology, where China is lagging behind western countries, Mike added.

Rare earth minerals are the basic materials for strategic or emerging industries such as the defense industry, electronic information, high-end manufacturing, aerospace, and new energy vehicles. According to the U.S. Geological Survey (USGS) report, the world’s rare earths reserves are 120 million tons, and China’s reserves of 44 million tons, accounts for 36.67 percent of the total. In 2019, China had 60 percent of the global production of rare earths.

In February, President Biden identified rare earths as one of four key areas where stronger policies are needed to reduce supply chain risks. Of the $2 trillion in infrastructure legislation announced by Biden on March 31, $15 billion is planned for rare earths element separation, electric vehicles, quantum computing, and a number of other demonstration R&D projects Reuters reported on Feb.18.

In recent years, the CCP monopoly on rare earths has come into focus for international relations, and the dependence of countries on China’s rare earths industry chain that is seen as a strategic risk.

Nikkei Asia, a Japanese media, reported on Oct. 24 that Beijing could use rare earth as “a diplomatic trump card,” mentioning that in 2010, when Japan nationalized the Senkaku Islands, Beijing put pressure on the country by stopping exports of rare earths to Japan.

The regime’s use of China’s rare earth resources as its major move to monopolize the global logistics supply chain, according to Sun, presents a tendency to return to a “planned economy” system. If returning to Mao’s planned economy era, enterprises might grow bigger and consolidate, which could benefit the CCP; but “for the market economy, it [the planned economy] is a monopoly.”

In a planned economy, state-owned enterprises would be short of vitality and efficiency, and the larger the enterprises inflate, the more they waste the country’s natural resources, Sun said.